Kanye West and Julia Fox: A timeline of their new romance 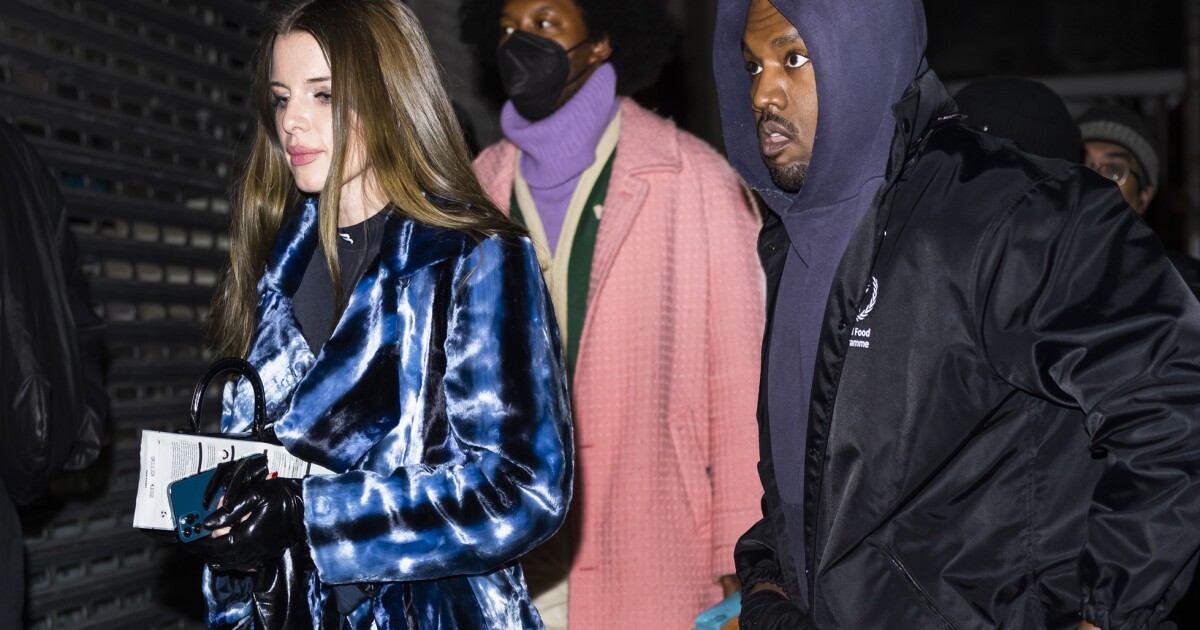 So Ye, the rapper formerly known as Kanye West, is dating actor Julia Fox. For, like, two weeks. But what a whirlwind it has been.

The two have hit the scene together in Miami, New York City and L.A., all in that short time period, leaving heads spinning among those who follow such things. Meanwhile, Ye’s estranged wife, Kim Kardashian, is moving ahead in a high-profile relationship with “SNL” actor Pete Davidson.

“It’s been a really crazy 2022,” Fox said on Thursday’s episode of “Forbidden Fruits,” the Spotify podcast she and pal Niki Takesh have been doing for the past few months.

The “Uncut Gems” actor guessed that the instant obsession with her and the rapper coupling up might be “because I’m not the most obvious choice. Maybe because I just came kind of out of left field and it was like, wait, what?”

So how serious are things between Ye, a rapper-designer-entrepreneur and separated father of four, and Fox, who in addition to being an actor-writer-model-designer is also a divorced mother of one, recovering addict and ex-dominatrix?

Let’s sift through the rumors and speculation, shall we?

Ye hosts a short-notice concert in Miami with a lineup featuring fellow rappers Future, Quavo and Justin LaBoy. Fox will reveal later that she met the rapper sometime during the evening.

Fox, 31, and West, 44, dine together at Carbone in Miami, per TMZ, whose sources say it is nothing serious — which seems appropriate for a date between people who just connected the night before.

“Ye bundled up in a black coat, while Fox opted for a sexy blue corset top and pants,” Page Six reported. Those details are supposed to feel significant, even though they are not.

Ye and Fox get dinner at Makoto Bal Harbour in Miami Beach, per Page Six. “The hostesses were blown away that he just walked in,” a “spy” for the outlet reports. Apparently Fox didn’t elicit the same reaction from them.

The relationship is confirmed! Unofficially! “Julia and Ye are dating,” a source close to Fox tells Page Six. “They both just got out of their former relationships, and they’ve helped each other recover immensely.

“They’re kind of kindred spirits, and it’s cool to watch,” the source says. Meanwhile, despite the unofficial confirmation, Fox tells paparazzi on the beach in Miami that “no,” she and Ye will not have a second date.

For their second date, back in New York City, the two go with friends to see “Slave Play” on Broadway, chat with the cast afterward for 45 minutes, then hit Carbone in Greenwich Village for a bite.

Changing clothes between the theater and the restaurant, Fox wound up wearing tons of Balenciaga, one of Kardashian’s favorite brands. Much is made of this tidbit.

No idea what Ye and Fox are up to, but Kardashian and Davidson are hanging out in the Bahamas.

Fox reveals details of their second date in an essay for Interview magazine. Apparently, Ye staged an entire photo shoot while they were in the restaurant, and the “whole restaurant loved it and cheered us on while it was happening,” Fox said, confirming the relationship officially.

“After dinner Ye had a surprise for me,” she continued in her essay. “Ye had an entire hotel suite full of clothes. It was every girl’s dream come true. It felt like a real Cinderella moment. I don’t know how he did it, or how he got all of it there in time. But I was so surprised. Like, who does things like this on a second date? Or any date! Everything with us has been so organic.”

“It’s a desperate play for attention,” a source tells Page Six about the relationship. “There’s no other explanation when he chooses … [Fox] to go public with.”

Another Page Six source says the rapper is “in pain” and acting out. “He publicly fights for his family back, and then he’s linked to all these different girls. It’s very strange.”

E! News reports that neither Fox nor West is taking the relationship that seriously. “She’s having fun and taking it day by day, but being a mom to her son is her No. 1 priority,” a source close to Fox tells the outlet, referencing Fox’s year-old child from her former marriage. A source close to the rapper tells E!, “He’s not looking for anything right now and is really focused on his business.”

This is all quite confusing.

This is a Sunday — the day we all rest, right?

Fox and Ye are spotted back in L.A., doing dinner together at Craig’s in Los Angeles, where TMZ says they are joined by Antonio Brown. Yep, Brown, the football player who just got booted from the Tampa Bay Buccaneers and, after melting down and tearing off his shirt, danced out of the stadium while egging on the crowd. (The Brown memes, incidentally, were a hoot.)

A source close to both halves of the former couple known as Kimye told People that although Ye is dating Fox, “He’s still telling people that he wants to have Kim back and he is willing to make appropriate changes to do so.” The source also said West “has no plans at this time to start a long-term relationship.”

This is the same day TMZ quotes sources close to Kardashian as saying she would rather have a Kardashian fan dating Ye, especially if the situation gets to co-parenting, which seems like a bit of a leap from a few dinners and a play.

Fox will later explain that although she’s been described in tabloids as a Kardashians superfan because of something she said once on her podcast, she’s “not diehard, like, stand in line in the cold, or like go to a store opening” when it comes to the Kardashians’ empire. “It’s not that serious.”

Ye and Fox hang out with Brown again in Los Angeles, plus Madonna, Floyd Mayweather, Evan Ross and others, at Delilah restaurant in West Hollywood. The new couple is photographed kissing. Also, actor-musician Ross posts video and pictures that show the two snuggling each other.

Fox rocks the universe, such as it is, with revelations shared on her “Forbidden Fruits” podcast, delivering them in a style reminiscent of the Kanye West of Olden Times.

“For right now I’m just living in the moment, and I don’t have any expectations,” she says. “There’s no labels, there’s none of that. It’s just people that make each other feel better. It’s really like such a Gemini-Aquarius connection. It’s very inspirational. Our minds, we both work very fast, we keep up with each other, which is cool. Like, I talk very fast. And I can have 10 trains of thought.

“What’s really exciting about him is, like, any idea can become a reality,” she goes on. “Anything is possible, any dream is possible, and I love that. And he’s such a doer, he’s like, ‘Let’s do it now!’ Don’t wait. … He’s really a genius, and it’s honestly just an honor to be in the presence and to be able to to witness this history happen in the studio with him and Future.”

Meanwhile, Ye is under investigation for allegedly punching a fan at 3 a.m. near the members-only Soho Warehouse in downtown L.A.

Also, JuliYe is definitely not a stunt, Fox says in the podcast, scoffing at the suggestion that they were set up by a publicist.

“I feel like to the people who know us both personally, all the people that we have in common, like friends in common have texted me and gone, ‘Oh my God, this makes so much sense,’” Fox says. “I’m just living my f— life, guys.”

Capping the eventful two weeks, a snippet of Ye’s new track “My Life Was Never Eazy” leaks online and doesn’t bode well for Davidson. “God saved me from the crash, just so I can beat Pete Davidson’s ass,” Ye raps, suggesting he’s not down with his ex’s new beau.

The full song, a collaboration with the Game, is slated to drop later Friday night, when fans will find out if that line makes the final cut.