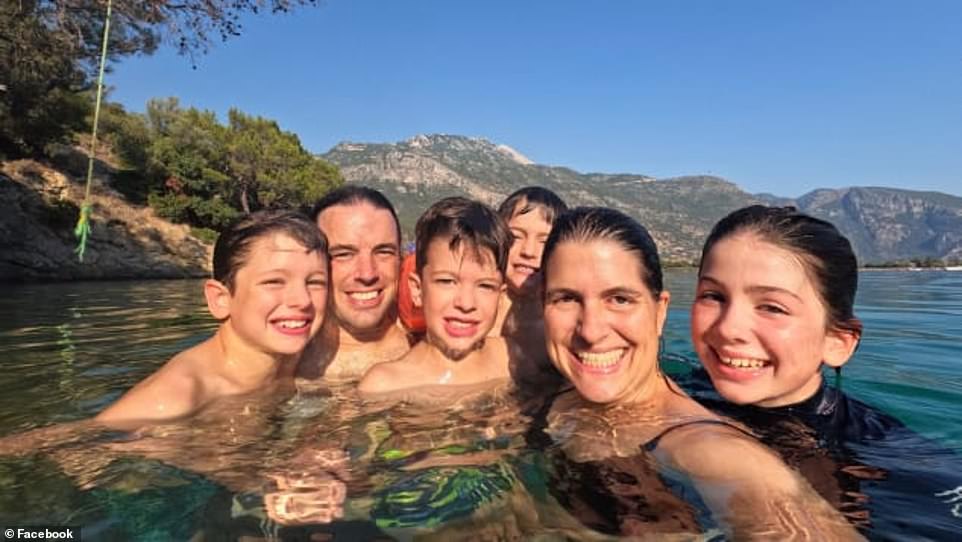 
A Canadian family-of-six has embarked on a year-long trip around the world before daughter, 12, and sons, seven and five, lose their vision due to a rare genetic condition.

The parents found out their eldest Mia Lemay-Pelletier had retinis pigmentosa — which could leave her blind by her 30s — after she started struggling to see in the evenings in 2018. The next year her brothers Colin and Laurent were diagnosed with the same disease, but second-born Leo got the all clear.

Mother Edith Lemay, who works in finance in Quebec where the family is based, said when the brothers were diagnosed it was the catalyst moment for a world trip to fill their brains with ‘visual memories’ before their sight deteriorated.

The family set off in March for the vacation — which has no set itinerary — that has so far seen them visit Namibia, Zambia, Tanzania, Turkey, Mongolia and now spend a week in Indonesia. They had first planned to begin with a trip across Russia and China in 2020, but this was canceled by the COVID pandemic.

Ms Lemay said as well as giving her children a rich bank of memories, she also wanted to show her children through the trip that no matter how hard life is they were lucky just to have running water in their home and be able to go to school every day.

Chronicling the travels on social media, she said it has been wonderful to watch the children come together but admitted it has been ‘hard work’ being with them 24/7. The youngest has already turned into a ‘question bomb’, she said, leaving her wondering if it might be better to jump out the bus window to escape.

Retinis pigmentosa is a rare genetic condition where cells in the retina — light sensitive part of the eye — begin to break down. Its symptoms normally first appear in childhood with problems seeing at night, with vision getting worse over time with sufferers gradually using either their peripheral or central vision. There is no treatment for the disease, and in some cases patients go blind by their 30s.

Pictured above are parents Edith Lemay (second right) and Sebastian Pelletier (second left) with their four children. Mia, 12, is on the far right. Also pictured are Leo, nine, Colin, seven, and Laurent, five. The family is taking a year-long world tour after finding out three of the children have a rare genetic condition that will lead their vision to gradually worsen

The trip began in March 2022 when the family flew from Canada to Namibia. Pictured above are the four children squinting to protect their eyes from the sand

TANZANIA: Family also visited Tanzania to go on safari. While there they saw elephants, cheetahs and hippos among others

MONGOLIA: The trip has also seen them travel to Mongolia where they stayed in tents and also rode camels in the Gobi desert. Their mother said she wanted to show the children with the trip that they were lucky to have what they do

The children are shown above on their trip in Mongolia. They have now flown to Indonesia for the next leg of the tour. There is no itinerary, their parents said, but they do have a bucketlist of activities to complete such as riding a camel

The mother also said that for every nice picture of her children, she has at least ten where they are pulling a face or being badly behaved. Shown above is one of her sons pulling a face at a viewpoint in Turkey

Mother Ms Lemay and father Sebastien Pelletier got the idea for the world vacation after their specialist suggested they should maximize ‘visual memories’ for the children.

In an interview with CNN Travel, Ms Lemay said: ‘I thought, “I’m not going to show [Mia] an elephant in a book, I’m going to take her to see a real elephant”.

‘And I’m going to fill her visual memory with the best, most beautiful, images I can.’

She added: ‘With the diagnosis, we have an urgency. There’s great things to do at home, but there’s nothing better than traveling.

The family had initially planned an overland trip through Russia and China to start the holiday for July 2020, but these plans had to be put on hold because of the global pandemic.

They took a trip around eastern Canada in July the following year as restrictions eased, but in March 2022 finally set off on their year-long trip starting in Namibia. Last week they headed to Indonesia from Mongolia, and have no plans to go back to Quebec for at least another six months.

They are following a bucket list of activities they want to try, from Mia saying she wanted to go horseriding to Laurent saying he would like to drink juice on a camel.

They were meant to begin the holiday in July 2020, but had to delay the plans thanks to the COVID pandemic. However, in July this year they set off on the year-long trip (shown above preparing to leave Quebec)

TURKEY: The children are shown here on their visit to an abandoned village in Turkey

MONGOLIA: The family is shown above standing outside a hut which they visited

At times the children bring up their diagnosis. Mia has known about it since she was seven, while the youngest two only found out about it more recently. For Leo, it has always been a ‘fact of life’.

Ms Lemay said: ‘My little one asked me, “mommy, what does it mean to be blind? Am I going to drive a car?” He’s five. But slowly, he’s understanding what’s happening. It was a normal conversation for him but, for me, it was heart-wrenching.’

The National Eye Institute, in the U.S., says retinis pigmentosa is a group of rare eye diseases sparked by genetics people are born with that cause visual cells to break down.

The first warning signs normally appear when people are children, with them starting to struggle to see at night and bumping into things. But overtime the vision will gradually deteriorate.

Most will lose their peripheral vision — seeing objects around the one they are focusing on — or central vision — area they see in the center of their vision. A study from the Department of Health and Human Services says some become ‘virtually blind’ by their 30s, while others may have ‘useful vision’ beyond the age of 80 years.

The condition is normally diagnosed using a dilated eye exam to check how the retina responds, or genetic swabs.

There is no cure for the condition at present, although experts say using low vision aids and training programs to rehabilitate to new vision can help.

European passengers soon can fully use phones on flights