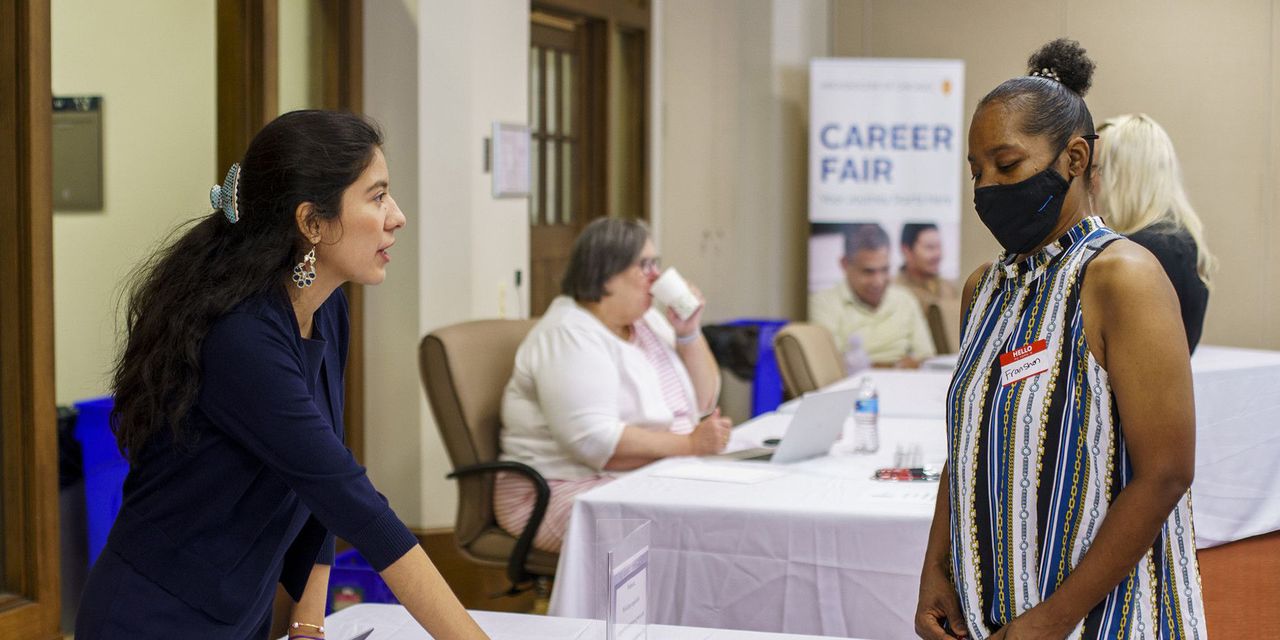 U.S. applications for unemployment benefits rose slightly after five consecutive weeks of decline as many employers continue to hold on to workers despite a slowing economy.

Initial jobless claims, a proxy for layoffs, increased to a seasonally adjusted 213,000 last week from a revised 208,000 the previous week, the Labor Department said Thursday. The total was slightly lower than the prepandemic average of 218,000 in 2019, when the labor market was also tight.

Continuing claims, a proxy for the number of people who have been unemployed and have received benefits for more than one week, decreased slightly to 1.38 million in the week ended Sept. 10 from the previous week. Continuing claims are reported with a one-week lag.

The report comes a day after the Federal Reserve raised interest rates by 0.75 percentage point for the third consecutive time and plotted more increases in the coming months to slow the economy and cool inflation.

“With monetary policy aimed at softening labor market conditions, demand for workers is set to moderate and layoffs are likely to pick up over time,” said Rubeela Farooqi, chief U.S. economist for High Frequency Economics.

The U.S. labor market has shown signs of strength despite cooling from a red-hot pace earlier in the year. Employers added 315,000 jobs in August. The unemployment rate has ticked up slightly, to 3.7% from a low of 3.5%. Economists note that that increase is the result of a positive development: labor participation rates have ticked up, meaning more people have entered the labor market to fill historically high numbers of job vacancies.

Still, some companies are pulling back on hiring and letting go of some workers.

plans to cut expenses by at least 10% in the coming months, in part through staff reductions.

said it would cut back on hiring seasonal workers for the winter holidays, looking to hire 40,000 temporary workers compared with last year’s goal of hiring 150,000 permanent workers for the busy shopping season and beyond.

have said that the ratio of job openings to unemployed workers must narrow to bring the labor market into better balance. The Fed is aggressively raising interest rates to rein in inflation that is advancing at a pace not seen since the early 1980s. In August, the consumer-price index rose 8.3% over the prior year, a slight slowdown from a recent high of 9.1% in June.

“The labor market continues to be out of balance with demand for workers substantially exceeding the supply of available workers,” Mr. Powell said Wednesday after the Fed’s September policy meeting. “Vacancies are still almost two-to-one ratio to unemployed people.”

The Fed’s moves are aimed at cooling the economy and officials expect their actions will push up unemployment over the next year.

A recent report on job openings from the Labor Department showed that job openings rose in July after declining for three consecutive months, reflecting persistently strong demand for workers, while layoffs remained lower than any point in 2019.

Mr. Powell still expressed some hope that the Fed could avoid a significant uptick in new unemployment claims, but noted that the current economic situation is “outside of historical experience.”

“We certainly haven’t given up the idea that we can have a relatively modest increase in unemployment,” while bringing inflation down to a more acceptable rate in line with the Fed’s price stability mandate, Mr. Powell added. “Nonetheless, we need to complete this task.”

Share
Facebook
Twitter
Pinterest
WhatsApp
Previous article
Around 200 Whales Die On Australian Beach Where Hundreds More Died Exactly 2 Years Ago
Next article
Is ‘The Rock’ as obese as a couch potato? Celebrity proof as to why BMI is severely flawed
- Advertisement -