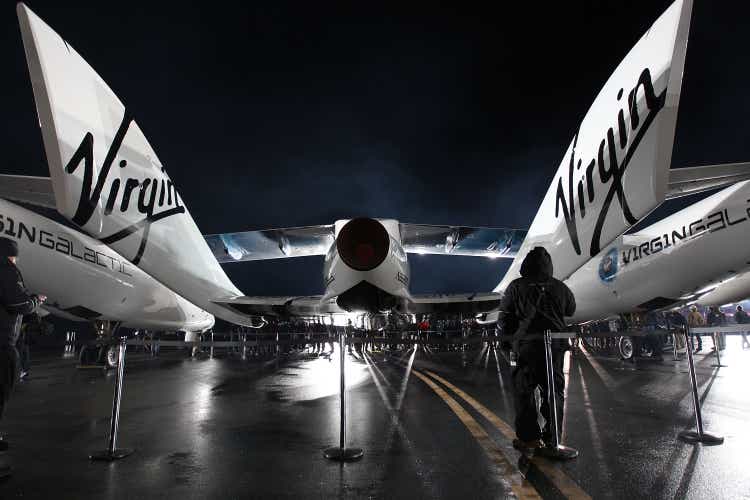 Wholesale prices rose 0.3% in November, more than expected, despite hopes that inflation is cooling


Virgin Galactic (NYSE:SPCE) could have been a good idea, had it been managed by competent people. Unfortunately, the management of this company has a track record of failing to deliver promises, and they have squandered more than a decade of easy money and bull market on an unending series of delays. Now the reckoning has come for them.

Investors who, for reasons best known to themselves, still hold shares in this company, are strongly advised cut their losses while it has any residual value left.

Virgin Galactic aims to operate in the space tourism sector. They propose to earn money by selling tickets to the super rich, at $450,000 per ticket, for the privilege of spending 90 minutes in space.

What’s wrong with this business model? Nothing!

What’s wrong with this business. Everything!

In this article I will describe four reasons to sell. They are 1) macro headwinds; 2) bad financials; 3) a management with a track record of failing to deliver promises; and 4) hostile regulatory attention in the distant, hypothetical future where Virgin Galactic’s space flights begin.

As long as there is war, three things will happen.

First, raw materials costs for businesses, especially in the West, are going to be high and rising. In particular, I would expect the price of natural gas to keep spiking, as it has over the last half a year. Obviously, this is not good for space exploration companies like Virgin Galactic, which would have to guzzle energy heavily.

Second, as the cost of raw materials rise, inflation will also climb as businesses try to pass on higher input costs to consumers. This will in turn trigger the Federal Reserve to increase interest rates, to try to dampen demand-driven inflationary pressures. The Fed announced a third consecutive 75 bps rate hike in their September meeting, taking the Fed rate, or the risk-free rate, to around 3%.

But with a higher-than-consensus 8.3% year-on-year CPI inflation in August, there is little chance that inflation will be curbed anytime soon. As long as there is inflation, there will be rate hikes. The current consensus is for Fed rate to peak at 4.5% well into 2023. (Even this, in my view, is a little conservative. The last time inflation went over 8%, the Fed rate peaked at 20%. I do not believe the Fed will be nearly so radical this time round, but I do believe that as long as the war drags on, inflation will be a problem; and as long as inflation is a problem, interest rates will keep rising, well above 4.5%.)

This is a problem for Virgin Galactic because higher Fed rates translate into higher cost of capital. In the good old days when Fed rates were close to the zero lower bound, which is to say roughly from late 2008 to late 2015, and then from early 2020 to early 2022, speculators may well feel that Virgin Galactic is ‘worth a punt’. There was no point letting money gather dust in a savings account, since there is no interest rate. And given the low interest rates, Virgin Galactic’s rosy projections of future cash flows may look attractive.

Third, the combination of higher raw material costs, and higher interest rates, will force businesses to cut back on investments and carry out layoffs. Which is to say, this combination is made for a recession.

The immediate, and most obvious, consideration is to wonder what a recession would mean to Virgin Galactic’s $450,000 flight tickets. I expect little demand for their space flights, even if it manages to come to fruition, in a recession – would you pay $450,000 for a ticket to space in a financial crisis? On the other hand, I do not expect them to ever be able to start commercial space flights, as I discuss below; so I will not dwell on this point.

The second consideration again relates to valuation. In a bull market, investors are generous, very generous; and they will throw money at any business that paints a rosy picture of its future. Nowadays, however, cash is king, and investors fear the coming recession. There is no more easy money to be had as sentiments turn defensive.

Virgin Galactic’s financials are also abysmal. They are sharply loss-making and they burn through cash at an alarming rate. Let’s take a look at the record of their net income and free cash flows, or FCF, over the last three years.

How much cash do they have on hand? As of June 2022, Virgin Galactic has $370 million in cash and cash equivalents. At the rate they’re burning through cash, that’s about enough to cover a single quarter of cash burn. What will they do after they run out of cash?

They will have to burn through their ‘Marketable securities, short-term’, which are valued at $587 million (June 2022 quarterly report, p. 4). That’s an interesting item. What are these other short term investments? They don’t say. Cool beans. But, referring back to my earlier commentary on rocketing interest rates, high inflation and a looming recession – do we think these marketable securities are more likely to appreciate, or depreciate, in value?

Given what we know so far of Virgin Galactic marketable securities, which I discuss in Figure 2 below, I expect them to much more likely be unsound investments that will, going forward, depreciate sharply in value as froth drains out of the market.

Let’s take a look at how, as of June 2022, Virgin Galactic’s general class of marketable securities are doing.

It seems that Virgin Galactic has incurred unrealised losses of about $1.9 billion in the second quarter alone, and about $7.6 billion in the first and second quarters, in the value of their marketable securities. That’s awful, and it will be truly awful for their cash flow if and when they realise those losses, as they will need to if they sell some or all of those securities to raise finances.

If Virgin Galactic needs financing, as I expect them to given their low cash balances and high cash burn, how would they try to go about doing it?

They could issue debt, but that’s not going to happen. They are financially unsound with no real prospects of earning revenues in the next twelve months (more on that later), and bond investors will demand a prohibitive yield on their debt.

They could issue convertible debt, as they did earlier this year; or they could issue equity. Both will be dilutive to existing shareholders, so if you hold Virgin Galactic shares, prepare to be diluted (unless you sell first).

Management with a track record of failing

To set the background, I note a few facts. First, the company’s founder, Richard Branson, has never been to university. His business background is not in tech; it was in selling records and vacation packages, subsequently developing into gambling and advertisements. He has no knowledge of or expertise in tech, or aerospace, or composite materials: these are not his native domain.

Who are his competitors? Jeff Bezos and Elon Musk, both of whom took degrees (in computer science and physics, respectively), from elite universities (Stanford and UPenn, respectively). They’ve worked all their lives in tech, which is their native domain. How do you think Branson measures up?

Second, I note that reviews on Glassdoor by Virgin Galactic’s employees rate the company an abyssal 2.7 out of 5 on average, and, perhaps because its founder does not understand science and engineering, the scientists and engineers consistently express dissatisfaction with management; describe a subordinate position to marketing and press; and a high turnover rate. In contrast, Blue Origin and SpaceX employees, especially engineers, rate their companies much more highly (3.6 and 4.0, respectively). Comparing the reviews of the engineers between Virgin Galactic, Blue Origin and SpaceX is particularly instructive.

I do not think Virgin Galactic will be able to launch commercial flights for at least a year, possibly forever. And, even if it does launch commercial flights, it will be selling $450,000 a ticket to a world facing a cost of living crisis, in an economy where central banks around the world is hiking inflation, and possibly at the nadir of a terrible recession, in the middle of a major war between Ukraine and Russia.

A recipe for disaster!

Finally, commercial space flights, even were they to take place, are likely to attract hostile scrutiny from regulators across the world.

Given that space flights emit 100x more carbon dioxide than regular flights, it seems quite unlikely that Virgin Galactic is going to be ESG friendly. Indeed, space tourism appears to be the prime example of an extremely polluting industry that can be eliminated without any loss of welfare to humanity. With governments committing the Net Zero targets in the US, the UK and Europe, I expect that regulators will at some point try to curb, to heavily tax, or even to ban the emissions-heavy space tourism sector. This will damage Virgin Galactic’s business model.

In this section I describe the risks to my sell thesis, and describe why they are highly improbably.

Second, commercial space flights begin – in what kind of world? In Q2 2023 I fully expect a full-blown recession with high energy costs driven by the war in Ukraine with no end in sight. I expect high levels of unemployment, a cost-of-living crisis, and depressed economic sentiments, where people and corporations cut expenses to try to hoard cash.

So for my sell thesis to be overturned, you’d need to expect an economic boom in the next couple of years, where people feel wealthy, financially secure and are willing to splurge $450,000 on 90-minute space flights. You’d also want energy to be abundant, and energy prices to be low, which probably requires Ukraine and Russia to make peace, which seems impossible.

Third, even if commercial space flights are booming, for my sell thesis to be overturned you’d need to expect that either governments around the world stop caring about climate change, or that space flights are able to sharply reduce their emissions in order to placate hostile environmental regulations. Neither event seems probable to me.

I note that all three events must take place (for commercial flights to start next year, for an economic boom to take place, for Virgin Galactic to somehow avoid Net Zero policies) for my sell thesis to take place. Each individual event is, in my view, improbable. For all of them to take place is near impossible.

Virgin Galactic’s space tourism idea is not a bad one. Unfortunately, Virgin Galactic is a business that is led by a management with a track record of delaying commercial flights over seven years, while their own employees have little faith in the company and rate it very poorly. Moreover, the company has been burning through cash at an alarming rate. It will, in my view, be forced to raise financing soon, as the world heads into an economic downturn.

Wholesale prices rose 0.3% in November, more than expected, despite hopes that inflation is cooling