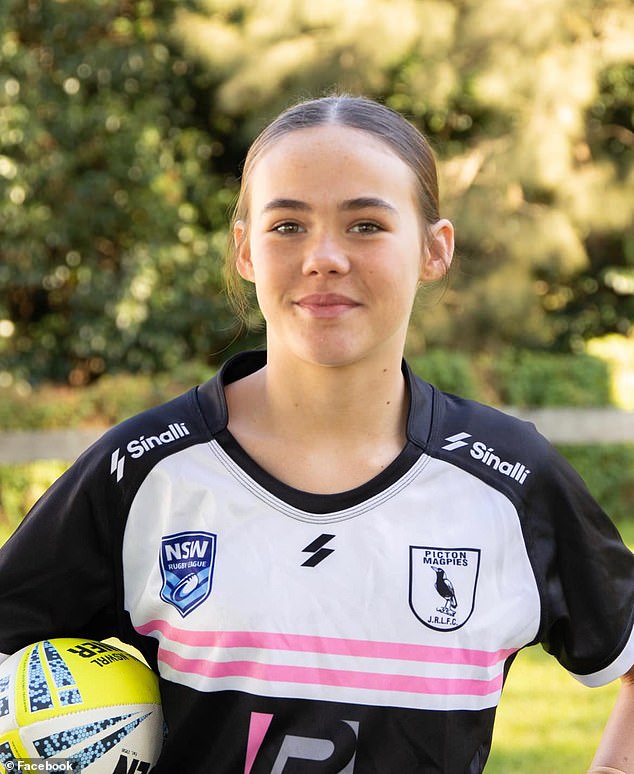 
The mother of Buxton crash victim Summer Williams has broken her silence as she thanks the community for their support since her daughter’s death.

Summer was killed alongside her Picton High School peers Antonio Desisto, Tyrese Bechard, Lily Van De Putte and Gabriella McLennan – all aged 14 to 16 – when a Nissan Navara ute veered off the road and into a tree southwest of Sydney on September 6.

The driver and sole survivor, Tyrell Edwards, 18, has been charged with five counts of dangerous driving and remains in jail on suicide watch.

On Wednesday, Lisa Williams issued a heartfelt message of appreciation to the community as her family braces for the ‘tough’ journey ahead without their 14-year-old daughter.

‘Thank you [to] the Wollondilly community for the love and support that has been shown to my family throughout this nightmare,’ Ms Williams wrote in a local Facebook group.

Summer Williams, 14, was tragically killed when a car carrying six teenagers ploughed into a tree in Buxton, southwest of Sydney, on September 6

‘Our family will never be the same and the next chapter is tough.

‘Summer loved everyone. She will never be forgotten. I’m totally forever grateful in the Wollondilly community.

‘Thank you, from my family to yours.’

Alongside the post, Ms Williams shared a photo of flower tributes and a silver inflated ‘S’ balloon left for Summer and other victims at the crash site on East Parade.

Other images taken at the teenager’s funeral on Monday show dozens of mourners lining the side of the road, wearing pink ribbons around their wrists in honour of Summer, as loved ones walked down the centre, carrying a large photo of her face.

Thousands of friends and loved ones offered their condolences to the grieving family and reminisced about the ‘fun loving and beautiful’ girl.

‘My heart goes out to your family. Summer was such a fun, loving, beautiful young lady that my daughter will deeply miss like a lot of people around the Wollondilly,’ one woman commented.

Mourners, who wore pink ribbons in honour of Summer, lined the street as her family walked down the middle of the road

‘She truly touched the hearts of everyone she met.’

Another said: ‘Thinking of you and your family Lisa. Summer certainly was an energetic and gorgeous girl full of character.’

‘Your beautiful summers send of was incredibly beautiful, you and your family should be so so proud of yourselves,’ a third person wrote.

‘An incredibly loved little girl who has left a long lasting impact in our community.’

Summer, along with Antonio Desisto, were the last of the five teenagers to be laid to rest on Monday after services for Tyrese, Lily, and Gabby were held late last week.

Unlike the other funerals which were open to members of the public, Summer was farewelled in a private ceremony at St Mark’s Anglican Church at Picton.

The victims are being commemorated in the area with balloon tributes, with a different colour dedicated to each teen.

As Picton High School mourns the teenagers, face-to-face learning moved online until Tuesday to enable students and teachers to attend the funerals.

Wollondilly Shire Mayor Matt Gould has called it a ‘very very difficult’ time for the region, and the council has set up a mayoral relief fund to offer financial support to the victims’ families.

Edwards is next due to face NSW Supreme Court on September 26.

Little girl spots her family in the crowd ahead of her stage performance. Her reaction is viral and how