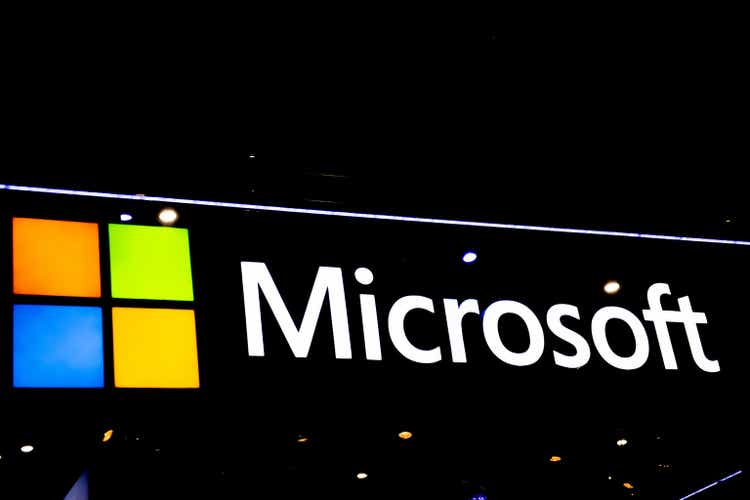 Microsoft (NASDAQ:MSFT) is one of my favorite investments, and I intend to hold the company’s stock — like many Seeking Alpha readers — until retirement

The thesis is simple: although MSFT stock has appreciated by more than 250% in the past few years, and clearly outperformed the market, I argue the stock is still cheap.

But how cheap is Microsoft? Well, it is certainly cheaper than it was a few month ago, being down about 21% YTD. But this is not the argument I would like to make. In this article, I present three different ways how an analyst could think about valuing MSFT stock: (1) a relative multiple comparison, (2) a sum of the parts valuation, and (3) a residual earnings model.

Notably, no matter the valuation framework, I calculate material upside for Microsoft.

But looking at multiples is a very superficial analysis. And I argue it doesn’t hold much value. Moreover, I am confident to say that a valuation premium for Microsoft is more than justified.

To get an accurate relative multiple comparison, a valuation model should account for a company’s growth. And I argue the PEG ratio does an excellent job to capture the relative tradeoff between a company’s current stock price, current earnings and expected growth. As defined by Investopedia:

The PEG ratio is used to determine a stock’s value while also factoring in the company’s expected earnings growth, and it is thought to provide a more complete picture than the more standard P/E ratio.

The PEG ratio is calculated by simply dividing a company’s one-year forward P/E ratio by the 3-year CAGR expectation. To estimate the CAGR expectation, I believe an analyst should anchor on analyst consensus estimates.

Following this calculation for Microsoft, I calculate a PEG of x1.43. Notably, this is significantly cheaper than the same metric calculated for other FAAMG companies — and much cheaper than what I calculate for the broader market (S&P 500 reference).

Microsoft appears significantly cheaper than both Apple and Amazon, with a 2.6 PEG and x3.1 PEG respectively. Only Google has a slightly more favorable PEG ratio.

In my opinion, an analyst could reasonably argue that Microsoft should trade at the FAMMG universe’ average PEG multiple, which is close to x2.3. Accepting this ratio, I reverse engineer the company’s implied P/E equal to about x41. If an investor accepts this reasoning, he would see MSFT stock fairly valued at around $427/share (about 60% upside).

Microsoft operates three key business units: (1) Productivity and Business Processes, (2) intelligent Cloud and (3) Personal Computing. The sum of the parts valuation anchors on the idea that if an investor were able to find a reasonable valuation for each of the single business segments, and add them up, he would be able to estimate a company’s intrinsic worth. The challenge, however, is in finding reasonable assumptions.

This valuation methodology also assumes that a company can be split-up and sold without frictions, and that there are no/little synergy effects between the units. This, of course, is not a reasonable assumption. Nevertheless, the SOTP valuation could be a useful valuation exercise, in my opinion.

That said, here are my assumptions with regards to Microsoft’s business units:

Productivity and Processes: In the FY 2022, this segment generated about $63.4 of revenues and $29.7 billion of operating income. Given that high-growth software firms often trade at x15 sales — and these firms are also less profitable than Microsoft — I argue a x12 Sales multiple would be a reasonable and conservative anchor. This would value the segment at $760.8 billion.

Intelligent Cloud: In FY 2022, this segment generated about $75.3 billion of sales and $32.7 billion of operating income. I follow the same reasoning that I applied for ‘Productivity and Processes’ and thus estimate a x12 Sales multiple as reasonable. Accordingly, I calculate a valuation of $903.6 billion.

Adding up the valuation of the segments, and accounting for Microsoft’s net cash equal to $26.35 billion, implies an equity value of $2,215.80 billion.

The implied market capitalization divided by shares outstanding returns a fair target price per share of about $297.10 (12% upside).

In my opinion, the residual earnings valuation is the most accurate valuation tool, but arguably also the most complex. As per the CFA Institute:

Conceptually, residual income is net income less a charge (deduction) for common shareholders’ opportunity cost in generating net income. It is the residual or remaining income after considering the costs of all of a company’s capital.

For Microsoft’s residual earnings valuation I assume the following:

With these assumptions, my residual earnings model for Microsoft calculates a base-case target price of $368.64/share (approximately 40% upside).

It is very hard not to like Microsoft. The software giant has considerably outperformed the broad market ever since the company has first sold equity to the public. And I think Microsoft is still cheap. In fact, in this article I presented three ways to value Microsoft, and all methodologies calculate considerable upside. For the relative multiple comparison, I calculate a $427 target price, for the sum-of-the-parts valuation I view $297 as fair, and for the residual earnings model an investor could assume a $369 anchor. This makes me confident to claim that MSFT stock’s best days are still ahead. I rate shares a Buy.