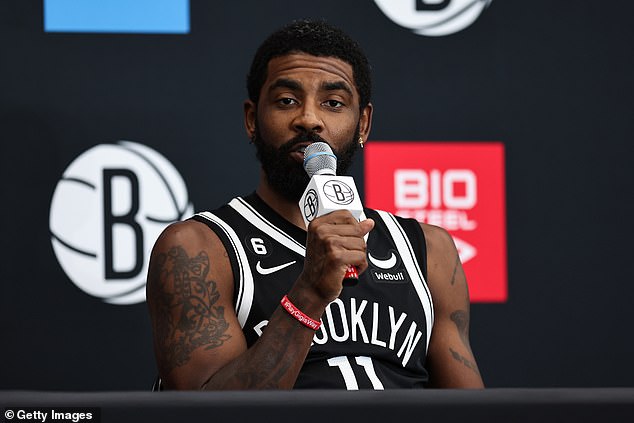 The veteran point guard was rumored to be heading towards free agency in June after struggling to finalize a long-term extension in Brooklyn following the Nets’ first-round playoff loss to the Boston Celtics. But instead of opting out of the final year an $36 million of his contract, Irving picked up his player option after finding the market for his services had deteriorated.

‘I gave up four years, $100-something million deciding to be unvaccinated,’ he told reporters. ‘That was the decision. It was contract [and] get vaccinated or be unvaccinated and there’s a level of uncertainty of your future.’

Irving, 30, went on to say that he believed the team was giving an ‘ultimatum’ by refusing to agree to a long-term extension unless he got the COVID-19 vaccine.

General manager Sean Marks pushed back on that suggestion Monday.

‘There’s no ultimatum being given here,’ Marks said. ‘Again, it goes back to you want people who are reliable, people who are here, and accountable. All of us: staff, players, coaches, you name it. It’s not giving somebody an ultimatum to get a vaccine. That’s a completely personal choice. I stand by Kyrie. I think if he wants, he’s made that choice. That’s his prerogative completely.’

“I didn’t appreciate how me being unvaccinated came to be a stigma within my career that I don’t want to play, or that I’m willing to give up everything to be a voice for the voiceless.”

Irving said he believed the team was giving an ‘ultimatum’ by refusing to agree to a long-term extension unless he got the COVID-19 vaccine. General manager Sean Marks (pictured) pushed back on that suggestion Monday: ‘There’s no ultimatum being given here’

The unvaccinated Irving was sidelined for much of last season due to the city’s mandate for public arenas and private workplaces, as well as the Nets’ decision to bench him for away games, citing their preference for full-time players. Team officials ultimately relented in January, allowing him to play road games, and the city followed in February by lifting the indoor mandate, allowing him to play at Brooklyn’s Barclays Center.

But Irving feels his decision to be a ‘voice for the voiceless’ cost him in the eyes of NBA teams, who were questioning his desire to play basketball.

‘There were options but not many because the stigma of whether or not I wanted to play or whether or not I’m committed to the team, which I thought was really unfair at times,’ Irving said.

Even Brooklyn backed off long-term extension talks with Irving amid the controversy, he said Monday.

‘We were supposed to have all that figured out before training camp last year,’ Irving said. ‘It just didn’t happen due to my status of being unvaccinated. It was a tough pill to swallow.

‘I had to deal with that real-life circumstance of losing my job for this.’

The NBA does not have a vaccine mandate, nor did it last season, but the league does defer to local health guidelines, which is why Irving was sidelined for so much of the 2021-22 campaign.

Irving wasn’t hostile with the media, Monday, but did share his grievances over the coverage of the episode.

‘I didn’t appreciate how me being unvaccinated came to be a stigma within my career that I don’t want to play, or that I’m willing to give up everything to be a voice for the voiceless,’ Irving told reporters.

Irving also addressed the offseason trade request made by teammate Kevin Durant (pictured), whom he referred to as his ‘best friend’

Irving also addressed the offseason trade request made by teammate Kevin Durant, whom he referred to as his ‘best friend.’

Referring to the situation as ‘awkward,’ Irving stressed that he supported Durant’s request, but is happy the All-Star rescinded the demand and is committed to playing with Irving in Brooklyn, for at least the upcoming season.

‘It was on Kev from the beginning and I honored his request and I understood it,’ Irving said, without specifying why Durant was upset with the team. ‘There was a level of uncertainty in this building, and not just for last year, but for the last few years. And that accountability he asked for should be available and accessible at all times. And we should have that type of environment. I echoed the same sentiments and I felt the same way.’

The trade request, which came after Durant signed a four-year, $194 million extension in August of 2021, naturally created a media circus as talking heads began speculating where the former MVP could be headed.

‘It’s just one of those shocking things you have as a best friend and you’re watching your best friend go through the other side of this media storm that comes with this trade request,’ Irving said. ‘Being in the middle of it, it’s kind of like a clusterf***.

‘All this, all the stories we’ve come up with, all the narratives surrounding this team, it’s hard to answer every single question you guys have about us and what our intent is. I’ll do my best to say that I honored what Kev had going on, and I was wishing him the best, but this was the best opportunity for him, and it’s the best opportunity for me, and we feel good. And it’s not just about us, it’s about how great we are as teammates and our team. Just great team, man, that’s all I’m gonna keep saying.’

Irving said that he is comfortable with Marks and owner Joe Tsai, although he did not mention head coach Steve Nash by name.

Durant told reporters Monday that he was not disappointed to see his trade request go unfulfilled.

He also was asked about the reasoning behind his request, but didn’t go into specifics.

‘There was a lot of uncertainty around our team last year,’ Durant told reporters. ‘We came to a mutual agreement that we should keep moving forward.’

Durant explained that he would not have rescinded the request had Nash and Marks refused to agree to deal with his concerns.

‘I voiced them to Joe,’ Durant said. ‘I’m getting older. I want to be in a place that’s stable and try to build a championship culture. We came to a mutual agreement that we should keep moving forward.’

When asked if he was surprised that the Nets struggled to find a trade partner, Durant admitted that he wasn’t, because of Brooklyn’s asking price.

Irving believes the discussion between the Nets’ brass, himself and Durant helped move the team forward, following a devastating 4-0 series loss to the Celtics in April.

Marks also addressed the offseason meetings, saying that he believes Durant is committed to winning in Brooklyn.

The Nets Kyrie Irving (left) has a pat for teammate Kevin Durant (right) as the Celtics were expanding their lead in the second half. The Boston Celtics visited the Brooklyn Nets for Game Four of their first round NBA playoff series at Barclays Center in Brooklyn, NY on April 25

Congress demands discussion in Parliament over China’s activities along LAC