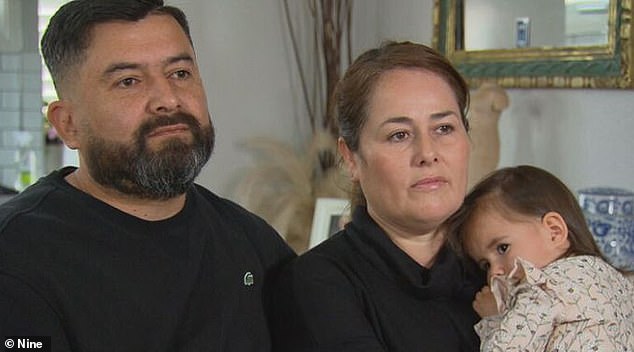 
Cruise ship company’s Covid policy for children ruins family holidays after they were cancelled at the last minute – but is the strict rule justified?

Families have lashed out at cruise liners for cancelling their holidays last minute because of strict Covid vaccination rules.

Nestor Timoteo and his family had booked a holiday seven months in advance with Carnival Splendor – which is operated by Carnival Cruise Line.

They were informed they would have to be vaccinated prompting Mr Timoteo, his wife Karina, mother-in-law Gloria and sons Lucas and Gabrielle to get their shots.

Mr Timoteo said he received a message days before departure saying their booking had been cancelled because their 18-month-old daughter Lucy wasn’t vaccinated.

‘They said, ‘Your booking is cancelled because you have an unvaccinated person in your group’,’ Nestor told A Current Affair.

The Australian Technical Advisory Group on Immunisation advises children between six months and five years of age who are at risk of severe disease get the jab.

ATAGI does not recommend children who are otherwise healthy to receive the vaccine.

Another family said their holiday was also cancelled because their seven-year-old autistic son was not vaccinated.

Anthony and his wife Diane have both received two doses of the vaccine but decided to not get their son Leo vaccinated for several reasons.

He is under the age of 12, has already been infected with Covid and his parents didn’t feel comfortable with him receiving the vaccine.

‘We didn’t think Leo needed a vaccination based on the rules they had set on their site, at the time, otherwise we wouldn’t have booked it,’ Anthony said.

Carnival CEO Marguerite Fitzgerald said 95 per cent of passengers must be vaccinated and that the conditions are clearly stated on the website.

‘Vaccine exemptions are limited to a small number of guests under the age of 12 and teens/adults with medical conditions preventing vaccination,’ the website reads.

‘Guests requesting a medical exemption will need to present evidence of a medical need at time of check-in.’

Ms Fitzgerald said the policy had been agreed on by states such as New South Wales, Queensland and Western Australia.

She noted the school holiday season meant the five per cent cap for unvaccinated travellers filled up quickly meaning some families would miss out.

Carnival Australia spokesman David Jones told Daily Mail Australia the policies were developed between state and federal governments and in conjunction with the cruise industry.

‘We are naturally disappointed for guests whose cruise holiday plans have been affected and apologise to them most sincerely for the disruption,’ he said.

‘Under the protocols, 95 per cent of guests must be vaccinated with the remaining five per cent accounting for guests with a medical exemption from vaccination and unvaccinated children under the age of 12.

‘Cruise lines cannot exceed the five per cent threshold. The combination of strong demand for cruising following restart and the school holidays has led to a situation where some bookings could not be satisfied.’