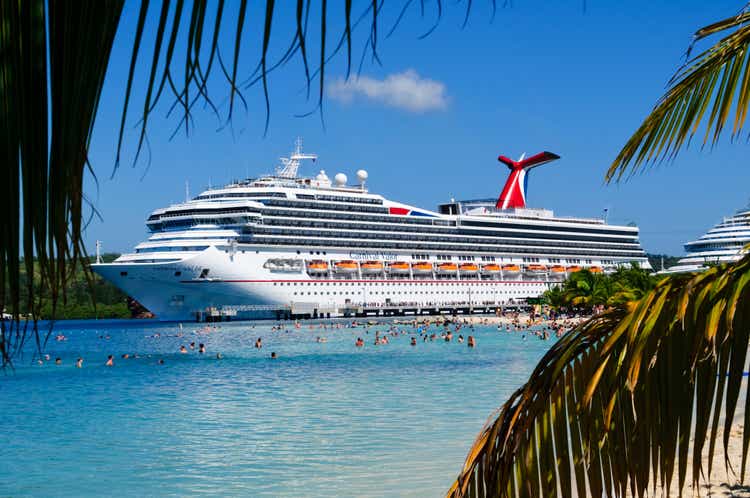 
While the picture above shows a cruise vessel in a happy place, I concluded in July that there was no party for shares of Carnival (NYSE:CCL). This came as the company announced a somewhat surprising and substantial equity raise in order to shore up liquidity to manage a continued cash burn in the business.

For years, Carnival was a steady business, which in a normal year 2019 generated $20.8 billion in revenues from managing operating multiple cruise liners, on which it posted operating earnings of $3.3 billion and earnings of $3.0 billion. This worked down to more than $4 per share based on a share count of just less than 700 million shares.

An $11.5 billion net debt load looked steep in relation to earnings power, but could be explained by the asset-intensive nature of the business, with its ships at the time carrying a $38 billion book valuation, with equity valued at $25 billion on the balance sheet.

Following the outbreak of the pandemic, the business found itself in an unbelievable period of turmoil. Revenues plunged to just $5.6 billion in 2020 on which a huge $8.9 billion operating loss was posted, even if I correct for deprecation and goodwill charges which make up half this loss. This resulted in the company incurring a lot of debt and shareholder dilution as well, which provided liquidity in the near term, but it limited the potential upside in case of a recovery as well.

After trading in the low single digits during the initial scare of the pandemic, shares actually rallied to the $30 mark in 2021, which was astonishing as first quarter revenues only came in at $26 million at the time (which is not a typo), all while the enterprise valuation actually exceeded the valuation during normal times in 2019 following dilution and assumption of more debt.

That situation was clearly not substantial, even as Carnival was a dangerous bet with meme stock rising left and right, as shares fell to the $10 mark again in July. 2021 revenues fell from $5.6 billion to $1.9 billion, coming in at less than 10% of the 2019 numbers, with operating losses totaling $7.1 billion.

Even as first quarter sales recovered to $1.6 billion, the company still incurred a $1.5 billion operating loss. In the meantime, the share count rose to 1.14 billion shares as net debt inched up to $28 billion. While second quarter revenues did rise to $2.4 billion, operating losses were stuck at $1.5 billion as the reopening of operations involved a lot of costs, including inflation, labor shortages and start-up costs, not to mention a higher fuel bill.

With the company selling more than 100 million shares at $10 in July, the $1 billion in proceeds came at the expenses of nearly 10% dilution, while the raised money is only sufficient to offset two months of operating losses.

Even if the company would return to its 2019 results which includes $20 billion in sales and $3 billion on operating earnings, after-tax earnings would only come in at a billion, resulting in profits of less than a dollar per share, as this is a huge stretch on an operating front, leaving me still very cautious to the shares.

Since July, shares have been stuck around the $10 mark as investors are digesting the full reopening of the economy, with Covid-19 no longer causing an overhang on the shares, as the company has been facing difficult operating conditions with the economy already decelerating.

On the final day of September, the company announced its third quarter results. Third quarter revenues came in at $4.3 billion, more than the combined $4.0 billion revenue number in the first half of the year. This is quite encouraging, yet despite this $17 billion run rate number, the company still posted a quarterly operating loss of $279 million, or more than a billion a year. With interest expenses running at more than $400 million a quarter now, a net loss of $770 million marks dramatic improvements from previous quarters, but is still very substantial in relation to the revenue base, certainly as occupancy rates have improved to very high numbers already.

This is extremely painful as net debt is stuck around $27 billion, despite July´s equity raise, as the share count has risen to 1.18 billion shares now, resulting in a market value of less than $10 billion. On top of the continued losses, Carnival is dealing with a higher interest rate environment as well, as this will result in higher interest expenses going forward.

I must say that I am actually impressed with the sequential increase in revenues and operating leverage, but clearly the market was taken by surprise as shares fell by a fifth to levels in the high $7s. This is widely attributed to cautious bookings, but the reality is that even after a relative stronger quarter, I have huge concerns amidst the continued and very substantial cash burns.

After all, with the pandemic on its retreat and occupancy levels reaching near 100% levels, I fail to see how the business can turn a profit as a consolidation of debt restructuring still does not seem in the works. In either case, the situation for the equity holders looks rather demanding, making me extremely cautious as the ship continues to make water.