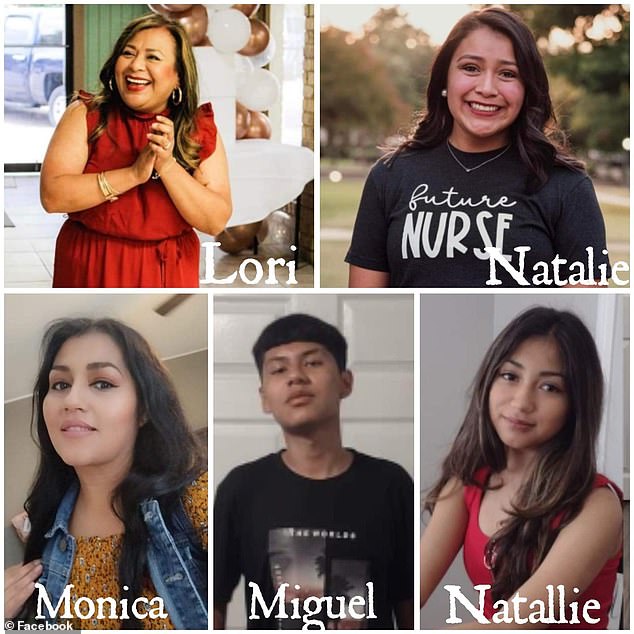 
A mother and two children who were among the five people gunned down in a small Texas town on Thursday have been identified by officials.

Monica Delgado, 38, the partner of the suspect, and her two children Miguel Avila, 15, and Natallie Avila, 14, as well as Lorena Aviles, 47, and Natalie Aviles, 20, were allegedly shot and killed in a residential neighborhood.

Nicolas Hernandez-Jaimes, 35, returned fire when police responded to the home in McGregor, Texas, and was taken into custody on Friday.

He is charged with felony aggravated assault with a deadly weapon with more charges pending, state Public Safety Department Sgt. Ryan Howard said in a statement.

The shooting occurred around 8 a.m. in McGregor, a city located just outside of Waco in East Texas, where police were called to to a ‘domestic disturbance.’

According to state Rep. Charles ‘Doc’ Anderson, the Aviles were neighbors of the murdered mother and children, and had went over to the home after hearing gunfire.

Nicolas Hernandez-Jaimes, 35, was taken into custody on Friday and is charged with felony aggravated assault with a deadly weapon with more charges pending

Monica Delgado was the partner of Nicolas Jaimes-Hernandez, and one of five people shot to death by him on September 29. Monica Delgado’s two childre, Miguel Avila, 15 right, and Natallie Avila, 14 left, were also killed. The deadly shooting began as a domestic disturbance call, according to police

According to Superintendent James Lenamon, Delgado’s children were students at McGregor High School.

A family member of the Aviles, Ashley Sanchez, wrote on Facebook that she was ‘absolutely heartbroken’ by the tragic event, and still in ‘shock and disbelief.’

‘They did not deserve to have this happen to them and I’ll never understand why. Two people that loved God, their family, and friends.

‘Natalie was a beautiful young girl, full of life, following her dreams of becoming a doctor, always had a smile on her face. Lori was a beautiful and amazing woman that has achieved much in her life and was great at loving and taking care of those around her, especially at the hospital where she worked.

‘I miss both of them so much already. Life won’t be the same.’

Lorena, 47, and Natalie, 20, were also allegedly shot and killed by Delgado’s partner in McGregor

Family member Ashley Sanchez wrote about the shooting on Facebook. ‘Today our family lost two beautiful souls. My cousin, Natalie Aviles, and my Aunt Lori Aviles. I am still in shock and disbelief. They did not deserve to have this happen to them and I’ll never understand why’

Law enforcement officers gather at the front of a house were five bodies were removed in McGregor, Texas, Thursday

Law enforcement officers use a tarp to block the view as one of five bodies are removed from a house in McGregor, Texas

Monica Delgado Aviles with husband Nicolas Jaimes-Hernandez in a photo from his Facebook page. He returned fire when police responded to the home in McGregor, Texas, and was taken into custody on Friday. He is charged with felony aggravated assault with a deadly weapon with more charges pending

Jaimes-Hernandez was reportedly shot by police on Thursday and taken to the hospital. News of his charges was released on Friday.

‘This is saddening information to actually have to put out, and stand up and give you today and thoughts and prayers and hopes for successful healing for the McGregor community,’ Howard with DPS said during the Thursday afternoon press conference.

The Texas Department of Public Safety and Texas Rangers are involved in the investigations at this time.

The reasoning behind the carnage is unknown.

The school district was briefly shut down following reports of the disturbance in the city. Schools were placed in ‘secure setting’ from just after 8 a.m. Thursday until noon.

Lenamon called the shooting a ‘horrific tragedy’ that ‘occurred in a domestic incident.’

‘McGregor is a quiet, beautiful town and something like this just doesn’t happen,’ said state Rep. Charles ‘Doc’ Anderson.

Top law enforcement officials told local news that they were called to the scene of the 900 block of Monroe Street around 8 a.m. to respond to a ‘domestic disturbance’

Evidence is collected near a home involved in the shooting that left 5 dead in McGregor, Texas