U.K.’s Central Banker Faces Inflation, a Financial Crisis and His Own Government 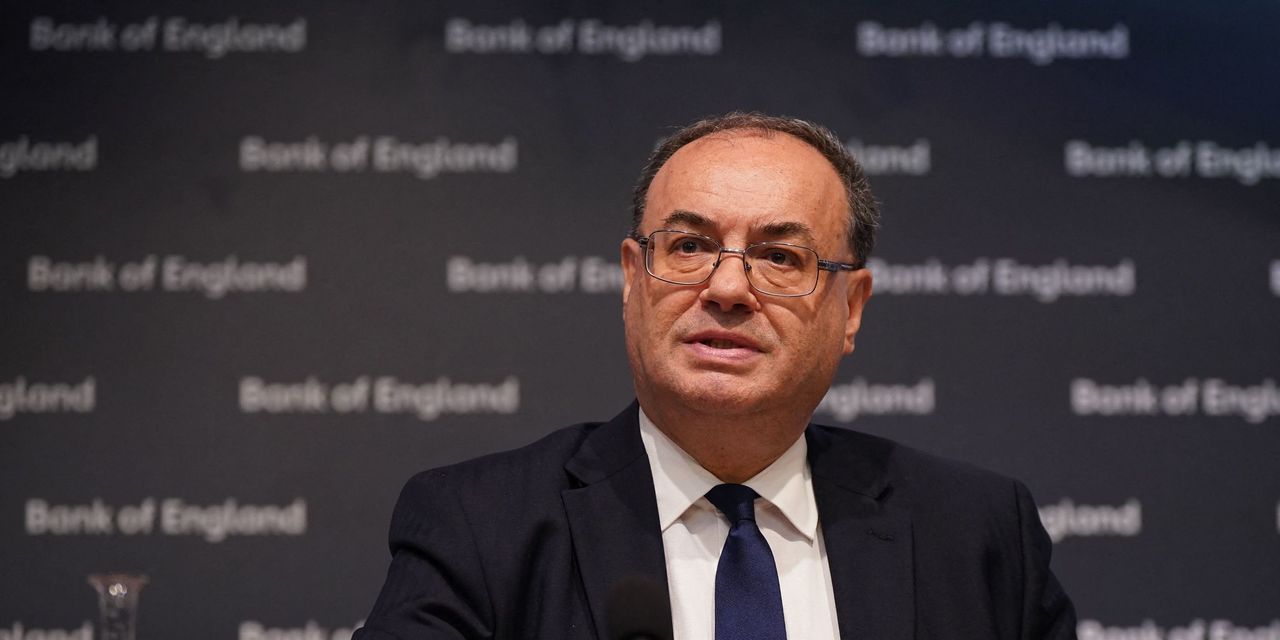 Mr. Bailey, a bookish, soft-spoken Brit, stood up in the hall and said such an about-face would be a tough sell to investors and the public since it would undermine the fight against inflation. It “is a very difficult message to get across to the outside world,” he said.

Just over a month later, the 63-year-old is doing exactly that. Last week, he ordered his central bank to offer to buy up to £65 billion of U.K. government bonds, or gilts, to avert a full-blown financial crisis. He is also trying to reassure investors he still plans aggressive rate rises to tamp the U.K.’s inflation rate, which is around 9% and his bank sees hitting 11% by year-end.

The markets sell off was ignited when the new government of Prime Minister Liz Truss announced a major spending program to offset fast-rising energy bills at the same time as the biggest tax cuts in a generation, moves that will widen the government deficit and further fuel inflation.

In reaction, the pound sank to record lows—it was worth almost one dollar for the first time—and yields on government debt soared, sending government financing costs spiraling. Falling bond prices, in turn, set off a chain reaction that caused pension funds who held derivatives linked to U.K. government debt to have to sell assets, prompting a downward spiral.

Mr. Bailey is in the hottest of hot seats of the central bankers battling inflation worldwide. He is grappling with one of the highest inflation rates in Europe, a prime minister who has been openly critical of the bank and a government whose fiscal plan is seen as stepping on the inflationary gas.

The Bank of England intervened to stop what it saw was “a material risk to U.K. financial stability.” The bank will continue buying U.K. government debt until Oct. 14, it said.

Its action calmed markets for now, but will add to inflation and put downward pressure on the pound, likely prompting even higher interest rate increases from the central bank in coming months, according to economists. Those, in turn, will likely offset at least part of the economic growth the government hoped for from lower taxes, as well as raise mortgage payments for millions of Britons who don’t have long-term fixed mortgages.

Still unresolved are the underlying problems in the pension fund market and the government’s fiscal plan, which earned a rare rebuke from the International Monetary Fund for potentially working at cross-purposes with the country’s monetary policy.

Among Mr. Bailey’s challenges is to maintain the Bank of England’s independence amid heightened political tensions and to show it isn’t afraid to make unpopular decisions, even those that run counter to government fiscal policy.

“The bank now has to demonstrate its independence while simultaneously engaging in a high level of cooperation with the government,” said

a former chair of Parliament’s Treasury committee, who regularly cross-examined Mr. Bailey. “That is a very difficult balancing act.”

Mr. Bailey declined to be interviewed for this article.

A colleague at the bank said Mr. Bailey sees the Bank of England as a backstop for credibility with the markets. “He’s the one people are looking to to be boring and sensible, and even do the unpopular thing,” said the colleague.

On Sunday, Ms. Truss said her government could have done a better job preparing financial markets for the tax-cut plan but otherwise defended the package of economic measures in an interview with the BBC.

It was her first acknowledgment that her signature policy since taking office last month had fallen flat among investors, voters and some members of her own party. “It was the right decision to increase borrowing,” she said. “I do stand by the package we announced and I stand by the fact we announced it quickly, because we had to act.”

The Bank of England was already struggling to contain one of the highest inflation rates of any major rich economy. Inflation in the U.K. has been particularly high due to skyrocketing energy costs from the war in Ukraine and a U.S.-style labor shortage.

The U.K. central bank raised rates seven times from 0.25% in December 2021 to 2.25% currently, and Mr. Bailey had announced plans for the Bank of England to sell some £80 billion of U.K. government bonds back to the markets in the coming year to draw money out of the financial system. Now, after buying bonds instead last week, that plan has been put on hold until Oct. 31 at the earliest.

Ms. Truss and Chancellor of the Exchequer Kwasi Kwarteng’s tax cuts and plans to boost growth might have had a warm welcome from financial markets last year, many economists said. But interest-rate increases mean funding tax cuts with debt has far higher costs nowadays.

“The math has changed,” said

a former member of the Bank of England’s Monetary Policy Committee. When interest rates were below inflation and economic growth, countries could take on debt and grow faster than the interest payments. But now that rates are likely to be higher than growth, debt will surge, even accounting for inflation, he said.

Like many European governments, the U.K. promised large subsidies for homes and businesses to protect them from sharply higher energy prices this winter. Unlike other nations, it announced the biggest tax cuts in a single year since 1972, meaning the government will be taking in less money even as it spends more, funding the difference with debt.

The government has argued that Britain is caught in a vicious cycle of low growth that strains public services and leads to higher taxes, sapping growth further. In a newspaper article on Sunday, Mr. Kwarteng said Britain’s tax burden was heading toward a 70-year high, and was “clearly unsustainable.” Tax cuts would spur higher growth, he said.

On Friday, ratings agency S&P lowered its outlook on U.K. sovereign debt to negative, citing risks to the country’s economy stemming from the plan.

Mr. Bailey’s credibility with markets will be crucial in coming weeks and months, particularly since the government has seen its own credibility erode in recent years, a process that started with the 2016 vote to leave the European Union and grew as the government struggled to carry out a post-Brexit vision or solve trade quarrels with the EU.

in a leadership contest, she criticized the government’s own Treasury department for its “orthodoxy,” the idea that the Treasury was too worried about financial stability and was blocking policies like tax cuts that would stir growth.

During the contest, her rival,

a former chancellor, warned that her plan for unfunded tax cuts was too risky at a time of high inflation and would spook markets.

Shortly after being named chancellor in early September, Mr. Kwarteng fired Tom Scholar, an experienced civil servant who many expected would have argued against the new budget plan. His deputy Charles Roxburgh left the Treasury in the summer and hadn’t yet been replaced.

Last week, as markets were selling off, Mr. Kwarteng met with investment and retail bankers and asked them what he could do to stabilize the situation, according to people familiar with the matter. They said Mr. Kwarteng seemed to believe the market had misunderstood the plan and that its main failing was presentational.

In his Sunday article, Mr. Kwarteng promised to publish a “credible” plan in November that would show a “commitment to spending discipline,” which analysts interpreted as spending cuts.

“They are stuck. They either reverse their plan, or deliver painful spending cuts,” said

After growing up in Leicester, Mr. Bailey got his Ph.D. in economic history at Cambridge University and joined the Bank of England soon after, in 1985. He is widely liked in the bank and takes the commuter train to work every day.

He also has a reputation as a crisis fighter, helping the central bank through the financial meltdown in 2008, the steep fall of the pound post Brexit and the financial ructions of the Covid-19 pandemic. He became governor in March 2020.

During the financial crisis, he was praised for his composure. In one instance, the treasurer at

PLC went to see Mr. Bailey to ask for a secret £25 billion cash infusion as the-then world’s biggest lender was about to collapse. Mr. Bailey calmly replied, “Yeah, we can do that,” according to people familiar with the matter. He later went on to become the banking regulator before then becoming deputy governor.

Mr. Bailey’s predecessor as governor of the Bank of England.

Several Conservative lawmakers have accused Mr. Bailey of being slow to act when inflation started to rise quickly in the U.K. and failing to raise interest rates quickly enough.

A bank spokesman pointed to the difficulties of raising interest rates emerging from a pandemic and during a very weak economy, and the surprise Russian invasion of Ukraine that sent energy prices soaring.

One of the Conservative politicians criticizing the bank was Ms. Truss. During the campaign to replace Mr. Johnson, Ms. Truss said she would potentially review the mandate of the bank amid criticism it had been too slow to raise rates.

That was the first time the bank’s status was being openly questioned by leading British government figures since it gained independence from politicians in 1997. “The regime, founded on central bank independence, is now more important than ever. The worth of any regime is tested in the difficult, not the nice, times,” Mr. Bailey responded in a July speech.

After Ms. Truss’s successful leadership campaign, Mr. Kwarteng was quick to try to mend relations with Mr. Bailey. The governor was the first person Mr. Kwarteng called when he got into office, according to one official. The two men have met multiple times in the Treasury or via video call, the person says.

The Bank of England was apprised of the chancellor’s plan but not all the details of it, according to a bank official.

The Bank of England urged the Treasury after the plan’s release to reassure markets by having the plan analyzed by the Office for Budget Responsibility, a government funded but independent agency that assesses public finances. The Treasury said the OBR would publish an analysis on Nov. 23, earlier than had initially been expected.

Financial products used by pension funds, meanwhile, complicated the Bank of England’s moves, in particular liability driven investment funds, or LDIs. These strategies, which were popular during the long stretch of ultralow interest rates of the past decade, help pension funds meet their obligations to fundholders through complex bets on government bonds. But when yields shot up suddenly, as they did after the government’s plan was announced, the pension funds were forced to sell assets to maintain their bets, threatening to spark a spiraling financial crisis.

The OBR announcement did little to calm markets, and by Wednesday, the bank said it would step in to buy government debt to stabilize the market.

“Mr. Bailey is only just two years into his term and during that time he has needed to form a relationship with four chancellors and two prime ministers against a background of a good deal of domestic economic turbulence and a war and an energy crisis,” says Mr. Tyrie, the former chair of Parliament’s Treasury committee. “The age of moderation this is not.”

—Paul Hannon contributed to this article.

7 dead in shooting outside east Jerusalem synagogue – Times of India