A catfishing cop came to California and killed their family. ‘It can happen anywhere’ 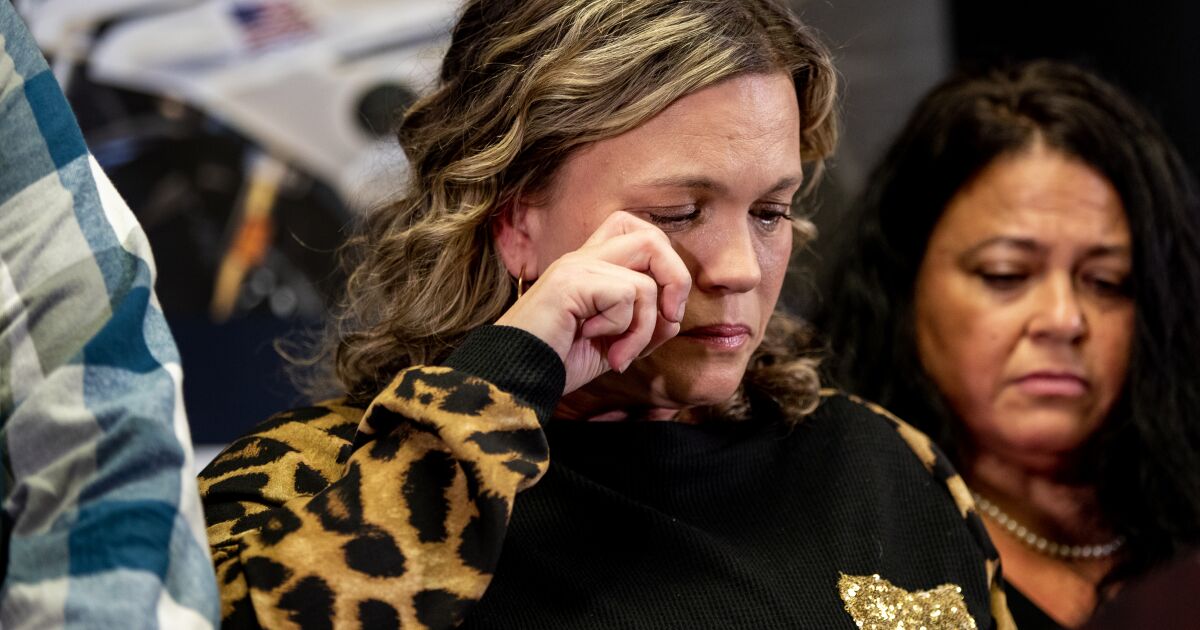 It was the day after Thanksgiving, and John Winek was in Oregon spending the holiday with his sister.

Then the call came.

Back in Southern California, Winek’s brother, sister-in-law and niece were dead, their house was on fire. A Virginia cop who had “catfished” his 15-year-old great-niece was behind the rampage and was now on the run with her.

“It’s incomprehensible,” Winek said Wednesday. “They’re here one moment and gone the next. Nobody should have to go through something like this.”

Austin Lee Edwards, 28, a Virginia police officer, posed online as a teenager in order to “groom” Winek’s great-niece, then drove across the country to her home in Riverside, where he killed the girl’s mother and grandparents and set fire to the home before driving off with the girl, according to Riverside police. Authorities initially said that he was killed in a shootout with police after his vehicle was stopped, but the San Bernardino County Sheriff’s Department announced Wednesday that he had died from a self-inflicted gunshot wound.

The girl was not physically harmed and is now in the care of child protective services, officials said.

For Winek and other family members, the tragedy comes with a lesson for parents.

“Take care of your kids,” Winek said. “Be aware of what’s going on. If you’re involved, even if they’re upset about it, you’re doing the right thing.”

Detectives with the Riverside Police Department said that Edwards met the teenage girl through a method of online deception known as “catfishing,” in which a fake profile or identity is used to lure someone.

“Parents, please, please know your child’s online activity,” said Michelle Blandin, the daughter of Sharie and Mark Winek and Brooke Winek’s sister, during a Wednesday press conference. “Ask questions about what they’re doing and whom they are talking to; anybody can say they’re someone else. … If something like this horrific tragedy can happen here in our neighborhood, in our community, it can happen anywhere.”

The three family members killed in the rampage were Mark Winek, 69, a longtime baseball and softball coach at Arlington High School; his wife, Sharie Winek, 65, a devoted mother and grandmother; and their daughter, Brooke Winek, 38, a single mother of two teenage girls — including the girl groomed and manipulated by Edwards. They all lived together in the Riverside house.

Edwards — who had recently become a law enforcement officer in Virginia — portrayed himself as a 17-year-old while communicating online with the girl, using “grooming” methods, which can include tactics such as asking for or offering sexually explicit images, providing gifts and giving out compliments, Riverside Police Chief Larry Gonzalez said.

He said it is still under investigation how the digital relationship between Edwards and the girl transpired and on what platform they met or communicated, but said investigators believe many of those exploitative strategies for “sextortion” were used in this case.

“This type of victimization takes place across every platform, social media, messaging apps, gaming platforms, etc.,” Gonzalez said. “This is yet another horrific reminder of the predators existing online who prey on our children. If you’ve already had this conversation with your kids on how to be safe online and on social media, please have it again. If not, start it now to better protect them.”

Edwards, who showed up at the Wineks’ home Friday, graduated from the police academy earlier this year and had been newly hired as a patrol deputy with a southwest Virginia county sheriff’s office just 10 days before his rampage in Riverside, according to Virginia officials.

“This horrific event started with an inappropriate online romance between a predator and a child,” Blandin said through tears. “He took an oath to protect, yet he failed to do so. Instead, he preyed on the most vulnerable.”

While Blandin said Edwards tried to kidnap her niece, Riverside police officials said they are not yet describing the interaction as an abduction, as they are still combing through physical and digital evidence, trying to understand if she was coerced or threatened to get into Edwards’ car. However, Riverside police spokesperson Ryan Railsback said there is no indication the girl was involved in the killings or fire.

Blandin said she is grateful her niece is alive after everything that happened, and called on neighbors to look out for one another — as she said her parents’ community did.

Police were first notified of a situation afoul on the Winek family’s cul-de-sac Friday morning, when neighbors called in about a female who appeared to be distressed while getting into a red Kia Soul with a male driver. Soon after, calls came in about a fire at the Wineks’ home.

“The loving neighbors on my parents’ street saw an unfamiliar car and they immediately reported it to authorities,” Blandin said. “Making that call from that neighbor saved my niece’s life; and that neighbor is a hero in our eyes.”

Blandin said her dad, Mark Winek, was soft-spoken and humble, and would “go out of his way to help a friend or stranger in need.”

His love for coaching began in 1993 at La Sierra High School, where he coached her girls soccer team for four years, Blandin said. He went on to coach at many different Riverside high schools, finding his home at Arlington High, where he had been an assistant baseball and softball coach for close to a decade.

“She loved my sister and I, along with her four granddaughters, with every ounce of her being,” said Blandin, as she gripped her family members’ hands for support. “She enjoyed baking with us, and the highlight of the year was baking and decorating Christmas cookies. That is a tradition that I will carry on.”

Blandin thanked people for their generosity to the family’s GoFundMe account, which she said will be used to support her nieces, including for a college savings fund.

John Winek said he and his siblings grew up in Wisconsin and moved to California when they were younger and settled down in Anaheim. Mark and Sharie Winek were married for more than 40 years and John Winek had been the best man at their wedding in the 1970s.

He emphasized the pivotal role that Mark, Sharie and Brooke Winek played in the community, saying that Mark Winek would offer to mow lawns for his neighbors who were single mothers and that Sharie Winek “bent over backwards for anybody in the neighborhood.”

Errick Winek, Mark Winek’s nephew and godson who attended USC, said he and his uncle, who was an ardent Notre Dame fan, would often tease each other about the rivalry between their schools.

“I missed texting him this past Saturday during the eve of the USC vs. Notre Dame game. That was something that made it hit home,” the 37-year-old Ontario resident said.

“They’re a loving family. They lived together. They were incredibly close — Mark and Sharie’s pride and joy were their kids and by extension, their grandchildren. You never saw them beam so brightly than when they were around their family.”