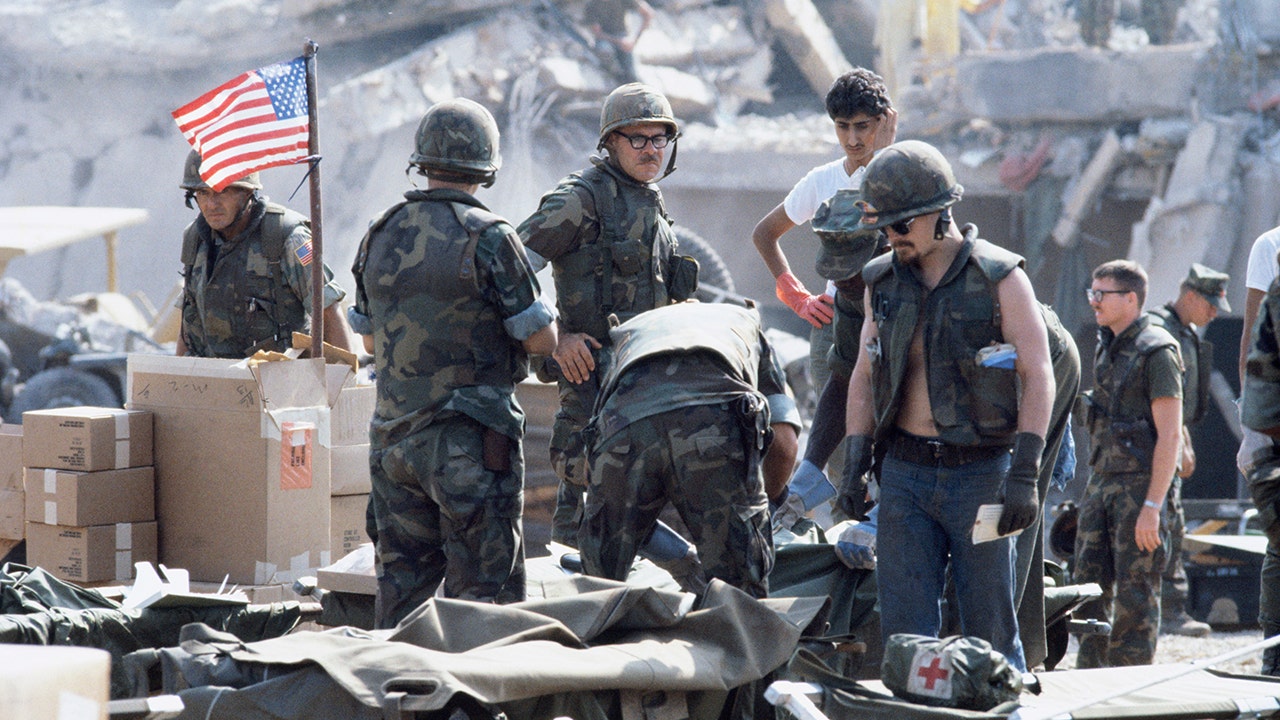 I am very pleased to support the Fairness for American Victims of State-Sponsored Terrorism Act introduced by Sens. Tom Cotton, R-Ark. and Dan Sullivan, R-Alaska.

It was the single deadliest day for the Marines since World War II.

HOUSE APPROVES $2.7 BILLION IN PAYMENTS TO 9/11 VICTIMS AFTER YEARS OF DELAY

At the time of the attack, I served as the Marine Corps Senate liaison in the Russell Senate Office Building.

The tragedy began several weeks of intense work to try to understand what had happened, and to respond to the deep concerns of senators, their staffs and the public at large regarding the welfare of the Marines, sailors, soldiers, and their families.

FILE – BEIRUT INTERNATIONAL AIRPORT, BEIRUT, LEBANON ON October 24, 1983: American Marines search for survivors and bodies in the rubble, all that was left of their barracks headquarters in Beirut, after a terrorist suicide car bomb was driven into the building and detonated, killing 241 US servicemen and wounding over 60. The American military was in Beirut as part of a Multinational Peacekeeping force. The Islamic Jihad, later to become Hezbollah, a militant organization, claimed responsibility for the attack that coincided with the bombing of the French military headquarters at the eight-story ‘Drakkar’ building..

The country’s pain, which intensified as the magnitude of the losses became clear, remains undiminished to this day.

It is clear that Iranian surrogates were behind the attack, just as there is no question that Iran remains the prime exporter of international terrorism today. While the evil done that day can never be undone, Congress now has a chance to help achieve a measure of justice for the families of U.S. service members killed in the attack.

HAMAS’ CYBER TERROR IS A TEST CASE FOR OTHER NON-STATE PLAYERS, REPORT SAYS

On September 30th, the House passed the Fairness for 9/11 Families Act. This bill would rescind and redirect $3 billion in unused CARES Act funds to further compensate 9/11 victims who had been originally excluded from the U.S. Victims of State Sponsored Terrorism Fund (USVSST).

Unfortunately, as written, this leaves behind the Beirut Marine barracks bombing victims, who were also excluded. When the USVSST was established in 2015, two groups of victims were left out: 9/11 victims who had received Victims Compensation Fund payments, and Beirut Marine barracks bombing victims (and a few others who joined their case) who pursued enforcement of their legal judgements against Iran. The idea was that these two groups had already received some compensation, so the USVSST should be focused on compensating those who had not received any money.

The Marines’ families accepted that decision, wanting a broader group of their fellow terrorism victims to benefit. However, Congress subsequently decided to change the original structure of the USVSST by directing half of it to 9/11 victims. The $3 billion in financial support that the House of Representatives passed would provide a “catch-up” payment to 9/11 victims as though they had been in the USVSST from its inception.

Now that Congress is expanding USVSST eligibility, it is only fair that the exclusion of the Beirut Marine barracks bombing victims also be remedied. This could easily be done through adopting Sen. Tom Cotton’s bill to rescind and redirect an additional $1 billion of unused CARES Act funds to provide the Marines’ families with a similar “catch-up” payment.

There is no objection to further helping 9/11 families, but there is an objection to leaving the Beirut Marines’ families behind.

We are confident this is not Congress’s intent. For Marines and their families, “Semper Fidelis” is not just a motto, it’s a way of life.  It goes without saying that the families of the soldiers and sailors who lost their lives in the Beirut bombing attack are included in the proposal.