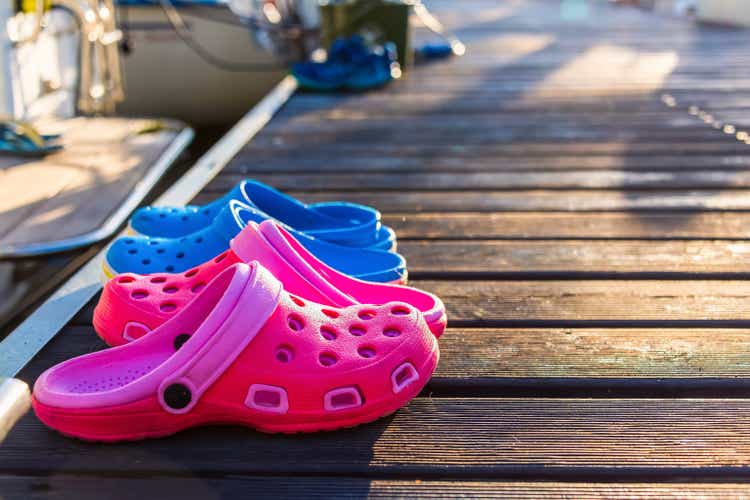 
Crocs, Inc. (NASDAQ:CROX) has in the past two quarters emerged as the best-performing footwear company in the market, with its 6-month price return of 81.13% handily outperforming peers such as Skechers U.S.A., Inc. (SKX), Steven Madden, Ltd. (SHOO), Deckers Outdoor Corporation (DECK) and On Holding AG (ONON).

CROX has not only garnered considerable momentum on the market, but its underlying business is also doing exceptionally well. Its financial and operational performance are the best they have been after a record Q3, The management was bullish on the future outlook in the most recent earnings call presentation.

Even with the stock almost doubling in the last six months, CROX is still considerably undervalued. It trades at a P/E (‘FWD’) of 11.74x, which is almost 60% off its 5-year average P/E of 29.05x. It’s also undervalued when compared with its peers as the chart below illustrates.

Considering the promising financial and operational prospects of CROX’s underlying business, the current valuation and price action are convincing signals that the stock could continue its strong outperformance.

One of the leading reasons why we believe investors have vigorously cheered CROX – and will likely continue to do so – is its ability to deliver strong growth and high margins at the same time.

CROX is expected to rake in record revenues of around $3.5 billion in FY 2022. Considering it reported revenues of $1.02 billion in 2017, it has essentially grown more than 3 times in the last five years on a topline basis.

The company has achieved this impressive growth through the Covid-19 pandemic, the shocks that came in the aftermath of Russia’s invasion of Ukraine, and the runaway inflation that has led to the tightening of financial conditions in the US and globally.

CROX’s impressive topline growth is not just another green blob on a fancy management presentation. The leadership and management team has been able to translate the company’s rapid topline growth into actual shareholder value. CROX’s EPS has grown notably over the last three to five years. Since the first quarter of 2019, it has missed analysts’ quarterly EPS estimates only once.

CROX enjoys strong EPS growth because it runs a highly efficient business and enjoys industry-leading margins. Its gross profit margin and net income margin of 56.26% and 17.43% respectively resulted in net income of $557 million against revenues of $3.2 billion for the trailing twelve months. SKX, which had revenues of $7.22 billion (more than double CROX) for the same period, only managed net income of $699 million during this time. The charts below give further comparisons that point to CROX’s industry-leading profitability.

CROX also owns two popular brands in the form of Crocs and Hey Dude. While assessing the relative strength of a brand is a subjective process, it is undeniable that a brand’s popularity has an outsized influence on sales performance in the footwear and fashion industry.

That’s why it’s highly encouraging that Crocs and Hey Dude are growing in popularity among key demographics, according to some surveys. “In the Piper Sandler’s Fall 2022 Taking Stock with Teens survey, the Crocs brand increased to the number five favorite footwear brand among teens, up from number six in Fall of 2021. The brand also continued to strengthen with men’s and kids, ranking as the number five and number four brands, respectively,” noted the CEO Andrew Rees on the Q3 earnings call. Hey Dude also rose to the number 7 preferred footwear brand for teens, up from number 8 in 2021.

Deleveraging and investing in future growth

While the short and mid-term picture look encouraging, investors need to prepare for the future. For CROX to maintain its growth trajectory over time, it needs a stronger balance sheet to be able to invest in new opportunities, fund innovation, and venture into new markets.

That is why the management is giving priority to deleveraging and strengthening the balance sheet. The company owed creditors a total debt of around $2.9 billion for the most recent quarter, with $2.6 billion of this being long-term debt. By comparison, SKX’s total debt is $1.61 billion, ONON’s is $350.66 million, SHOO’s is $110.14 million and DECK’s is $197.14 million.

“After repaying $350 million of debt year-to-date, we remain committed to using excess cash flow to repay debt,” said the CFO Anne Mehlman on the Q3 earnings call. The company has put its share repurchase plan on hold until it reduces debts to desirable levels, which according to management presentations is a level where gross debt to adjusted EBITDA is a value equal to or less than 2.0x.

The expectation by management is that the deleveraging goal will be achieved by mid-2023, allowing the share repurchase plan to continue. CROX has from 2014 repurchased $1.7 billion worth of shares at an average price of $37.90 per share. This has enabled it to reduce its shares outstanding by 16% from 73.6 million in Dec 2016 to 61.7 million in the most recently reported quarter. This has helped supercharge its EPS growth, which has also grown organically thanks to strong topline growth and industry-leading margins, both of which we’ve touched on in prior sections of this article.

Importantly, CROX has ambitious but realistic goals for future growth that suggest its best days are still ahead of it. It is for example looking to increase its exposure in China from less than 5% of Crocs brand revenue at the moment to more than 10% long-term. This is in addition to further expanding its footprint in the Asia Pacific. These are highly promising markets for footwear and fashion brands due to a confluence of economic and demographic factors.

The company is also investing more in its digital channels, which is not only efficient from a cost and logistics point of view but also great in terms of building connections, loyalty and trust with consumers. It expects digital channels to represent as much as 50% of total Crocs brand revenue by 2026, up from the current 37%.

We’ve been investors in CROX for a while, and it’s possible to be biased given the recent great performance and the endowment bias – an emotional bias that behavioral finance experts believe causes individuals to value an owned object higher, often irrationally, than its market value. That said, we are confident CROX will achieve its long-term goals and that there’s huge upside in the stock at current levels. We also believe it has a high-quality management team that can deliver against its goals. While management quality is a qualitative metric that is prone to subjectivity, results achieved over time speak for themselves. If you’ve followed this company for some time, you will see that for the most part, the management does what it says it will do and does it well. This, coupled with its strong fundamentals, promising prospects, low valuation, and strong price momentum make it a potentially rewarding stock pick.

Nearly a year on from the supposed Russian exodus, most major companies have yet to withdraw