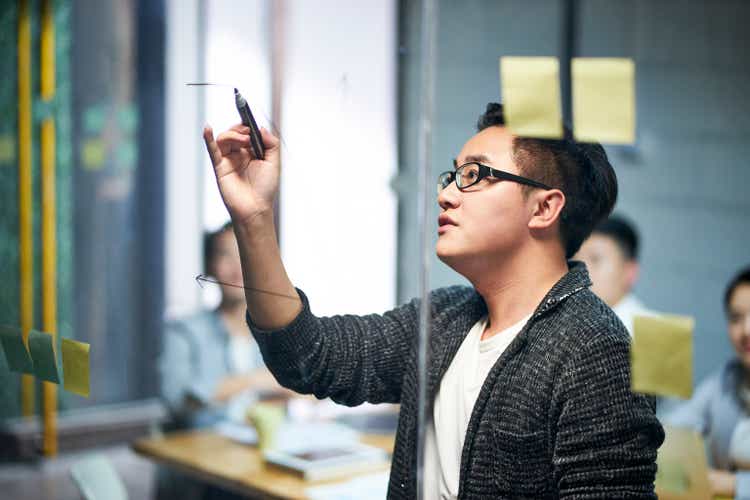 
A “perfect storm” of factors has combined to boost China’s vocational education sector, including strong government support and a slowing economy that is pushing more young adults to postpone job hunting in favor of continued education.

That tide has lifted the country’s private vocational education providers, including China Education Group Holdings Ltd. (OTCPK:CEGHF, 0839.HK) and China New Higher Education Group Ltd. (OTCPK:CNEWF, 2001.HK), which this week both released results for their financial years through August. Shares of both companies rallied by more than 6% in the two trading days after publication of their latest data, reflecting the broader positive sentiment towards the group.

Despite some big similarities, most notably strong revenue gains, there were also some key differences that show these are still businesses, each with its own strengths and weaknesses. In that regard, China Education appears to be doing a bit better than New Higher Education. That’s reflected in the companies’ price-to-earnings (P/E) ratios, with China Education now trading at about 13 times, or roughly double the 6 times for New Higher Education.

We’ll delve into the differences between these companies shortly. But first, we’ll begin with the big picture that shows how vocational educators are one of the few groups that seem well positioned to thrive in China’s building economic slowdown. That’s because the job market is really quite terrible right now, with the youth unemployment rate currently at around 20%.

When young people can’t find jobs, one of their first thoughts is to continue their education by learning new skills to make them more competitive when they do eventually enter the job market.

China Education Group noted that phenomenon in its latest report, pointing out the number of students taking the country’s college entrance examinations in 2021 and 2022 hit new record highs of 10.78 million and 11.93 million, respectively. The company said its own new domestic student enrollments totaled 71,000 for the 2022/23 academic year, up a hefty 48% from a year earlier.

At the same time, vocational educators are also benefiting from government policies that are strongly favoring the sector. Such support is hugely important for doing business in China, as it often opens the door to both direct and indirect government assistance in everything from financial grants to speedy approval of new business licenses.

On the flip side, lack of such support can also spell doom for a sector, as we saw last year when the government abruptly banned private companies from providing after-school tutoring services for K-12 students in core curriculum areas. That sudden shift effectively killed an entire industry of companies that are now scrambling to find alternative business models.

By comparison, the vocational education companies are sitting quite pretty – at least for now. And with the economic slowdown likely to build for at least the next few years and such schools acting as a sort of “sponge” to soak up unemployed young people and keep them busy, we do expect private vocational schools should stay in strong government favor for at least the next few years.

Of the two reports, China Education’s was more upbeat and spoke more broadly about the positive policy environment – reflecting the company’s own strong performance. Reflecting the trend, it pointed to a publication from China’s State Council in October 2021 showing how vocational education “has a promising future and huge development potential.” It also pointed out that China’s National People’s Congress passed a newly amended Vocational Education Law in April this year which “explicitly expresses that the government encourages, instructs and supports enterprises and other social forces in organizing vocational schools.”

With such strong policy support and a slowing economy boosting their prospects, China Education’s revenue rose 29% to 4.76 billion yuan ($670 million) for its latest fiscal year, while New Higher Education’s rose by a similar 24.6% to 2.26 billion yuan for the same period.

But the similarities don’t extend beyond the topline. While China Education’s student enrollment appears to be surging, based on the numbers we’ve described above, the same doesn’t seem to be true for New Higher Education. The latter said its number of enrolled students for the 2022/23 academic year actually fell slightly to 140,535 from 143,764 a year earlier, reversing a 14.4% gain the previous year. It didn’t provide any detailed explanation, but said the latest number represented a “stable increase” and that it “further optimized” its student structure as it focused on “high-quality development.”

The apparent adjustments going on at New Higher Education showed up in numerous other places in its report, including a gross margin that fell to 39% for the latest fiscal year from 44.6% the previous year. A big factor behind the falling margin was a 42% rise in the company’s cost of sales – much higher than its 24.6% revenue growth – led by a big jump in marketing costs.

As a result, New Higher Education’s profit for its latest fiscal year rose by just 6.5% to 630 million yuan. By comparison, China Education’s annual profit was up 31.5% to 1.94 billion yuan, roughly in line with its 29% revenue growth for the period. China Education didn’t provide a gross margin figure, but its gross profit as a percent of revenue was 58% – roughly unchanged from the previous year.

At the end of the day, New Higher Education appears to have some issues that it’s trying to sort out to take advantage of the very favorable economic and policy environment for vocational educators right now. If it can do that effectively, its shares could be set for some big potential upside as it narrows its valuation gap with peers like China Education. Either way, it’s probably safe to bet that barring any more major stock market sell-offs, this overall group of stocks could be a good bet for solid gains over the next two to three years.