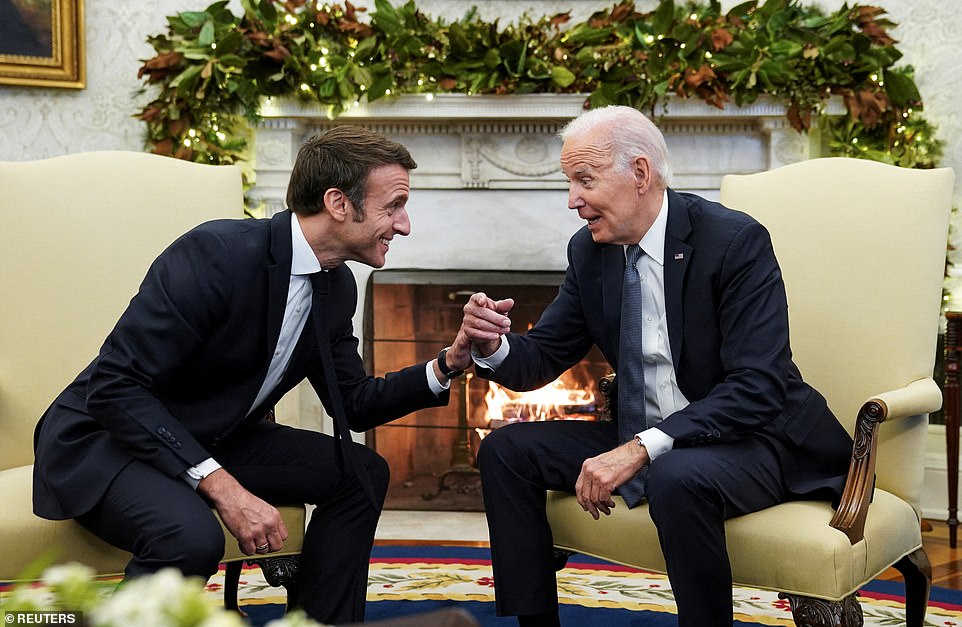 
President Joe Biden and Jill Biden welcomed French President Emmanuel Macron and his wife Brigitte to the White House on Thursday with a hug and a kiss on the cheek.

The Macrons were welcomed with full military honors, including Army, Navy, Marine and Coast Guard members in dress uniform, a drum corp of soldiers in 18th century Revolutionary War garb, and a 21-gun salute.

The two leaders reviewed the troops and exchanged a warm greeting before they adjourned to the Oval Office, where they will go head-to-head on economic matters, particularly on American subsidies the French worry are hurting their own economy.

But first the two couples, who had a private dinner at a Michelin-starred Italian restaurant in Georgetown on Wednesday night, exchanged a kiss on the cheek.

‘I’m looking forward to a wonderful day together,’ Biden said in brief remarks at the White House.

The arrival ceremonay was full of pomp and circumstance – a return to the pre-COVID way of diplomacy. The U.S. Marine band played versions of the French national anthem, La Marseillese, and the American National Anthem.

Hundreds of people gathered on the South Lawn on the sunny but chilly morning. Ushers distributed small French and American flags to the guests.

In addition to the greetings, gifts were exchanged.

The Macrons offerings including a vinyl and CD of the original soundtrack from the 1966 film ‘Un Homme et une Femme,’ which the Bidens went to see on their first date, according to the palace.

‘Because he’s my friend,’ President Biden said when asked why he’s hosting President Macron for his first state visit

The two leaders with the Washington Monument visible

After the welcome ceremony, the two leaders met in the Oval Office

The arrival ceremony featured a military marching band and flags

The Bidens and Macrons exchanged gifts, a tradition during a state visit.

Macron and Brigitte gave the Bidens a vinyl and CD of the original soundtrack from the 1966 film ‘Un Homme et une Femme,’ which the Bidens went to see on their first date.

Biden also received a cup from the house Christofle, created in 2012, in tribute to the great era when Christofle crossed the Atlantic aboard the ship Normandie; a sweater from the House SAINT JAMES; and a watch from LIP Horlogerie.

Jill Biden received books: Madame Bovary by Gustave Flaubert; and The Plague, The Fall, Exile and the Kingdom, and Selected Essays, by Albert Camus.

Macron brought Vice President Kamala Harris, whom he met with at NASA headquarters on Wednesday, a model of the Ariane 5 rocket.

The White House said President Biden picked France for his first state dinner because the French are America’s oldest ally and alliances are important to his administration.

In his welcoming remarks, Biden referred to their partnership.

‘As allies in NATO, together with our European union and the G7 and partners around the world, France and the United States are facing down Vladimir Putin’s grasping ambition for conquest and Russia’s brutal war against Ukraine, which has once more shattered peace on the continent of Europe,’ he said.

‘France and the United States are once again defending the democratic values and universal human rights which are the heart of both our nations. The wellspring of our strength is a shared commitment to liberty and justice for all,’ he noted.

‘Our new frontiers are there and it is our shared responsibility to respond to this, and to that effect the United States and France, the strongest allies are there because our relationship is rooted in centuries,’ he said.

‘I’m happy and honored to be here for the first state visit of your administration,’ he noted.

After the warm meeting will come the cool talks.

Macron, like many European leaders, is worried Biden’s Inflation Reduction Act, with its subsidies for U.S. manufacturers, will hurt European companies.

The French president even fired an undiplomatic shot at the American president on Wednesday.

‘This is super aggressive for our business people,’ he was heard telling members of Congress and business leaders at a lunch.

He told lawmakers the policies will ‘kill a lot of jobs’ in Europe unless they are synchronized globally.

In an interview that aired Thursday on ABC’s Good Morning America, Macron said the U.S. and France were working together well on the war in Ukraine and geopolitics overall, but not on ‘some economic issues.’

The U.S. climate bill and semiconductor legislation, he said, were not properly coordinated with Europe and created ‘the absence of a level playing field.’

It will be one of the many issues Macron brings when he arrives at the White House for his one-on-one meeting with Biden.

Macron also told the French community in Washington that the cost of the war in Ukraine was much higher in Europe than in the United States and that Europe risked falling behind if the subsidies siphoned new investments.

He said the legislation ‘creates such differences between the United States of America and Europe that all those who work in many companies (in the U.S.), they will just think, `We don´t make investments any more on the other side of the Atlantic.´’

President Biden and President Macron walk into the Oval Office

President Biden and President Macrton walk to review the troops

Biden and Macron watch the Fife and Drum Corp

Biden and Macron review U.S. troops on the South Lawn

Macron earlier this month said the subsidies could upend the ‘level playing field’ on trade with the EU.

European leaders have complained about the legislative package, signed by Biden in August, that offers massive subsidies for U.S.-made products, which they say unfairly disadvantages non-American companies and would be a serious blow to their economies as Europe deals with the fallout from Russia’s February invasion of Ukraine.

The Inflation Reduction Act has provisions that will contribute to the growth of the clean energy sector globally, she added.

Germany and its European Union partners are also trying to find an amicable agreement with the United States on how to deal with the effects of the U.S Inflation Reduction Act on the bloc’s industry, said a German government spokesperson on Wednesday.

Talks with the U.S. are aimed at making clear what impact the act will have, and if nothing comes from the discussions, then Europe will have to discuss how to go from there, the spokesperson told a regular government news conference.

There is no sign that Biden was prepared to make concessions.

Ukraine will top the agenda during the two men’s meeting.Their conversation also is expected to include discussion of Iran’s nuclear program and China’s increasing aggressiveness.

After the arrival, Jill Biden and Brigitte Macron headed to Planet Word, an interactive museum in Washington D.C. where they will meet with local school children.

Macron will be hosted by Vice President Kamala Harris for a lunch at the State Department before the evening state dinner for some 350 guests.

The glitzy gala to take place in an enormous tented pavilion constructed on the White House South Lawn.

Lobster will be served along with award- American cheeses and wine from Napa Valley.

The Bidens and the Macrons ate at Fiola Mare on Wednesday evening – an Italian restaurant on the bank of the Potomac River where an entree runs between $50 and $150. The menu includes a variety of pasta, seafood and cheeses