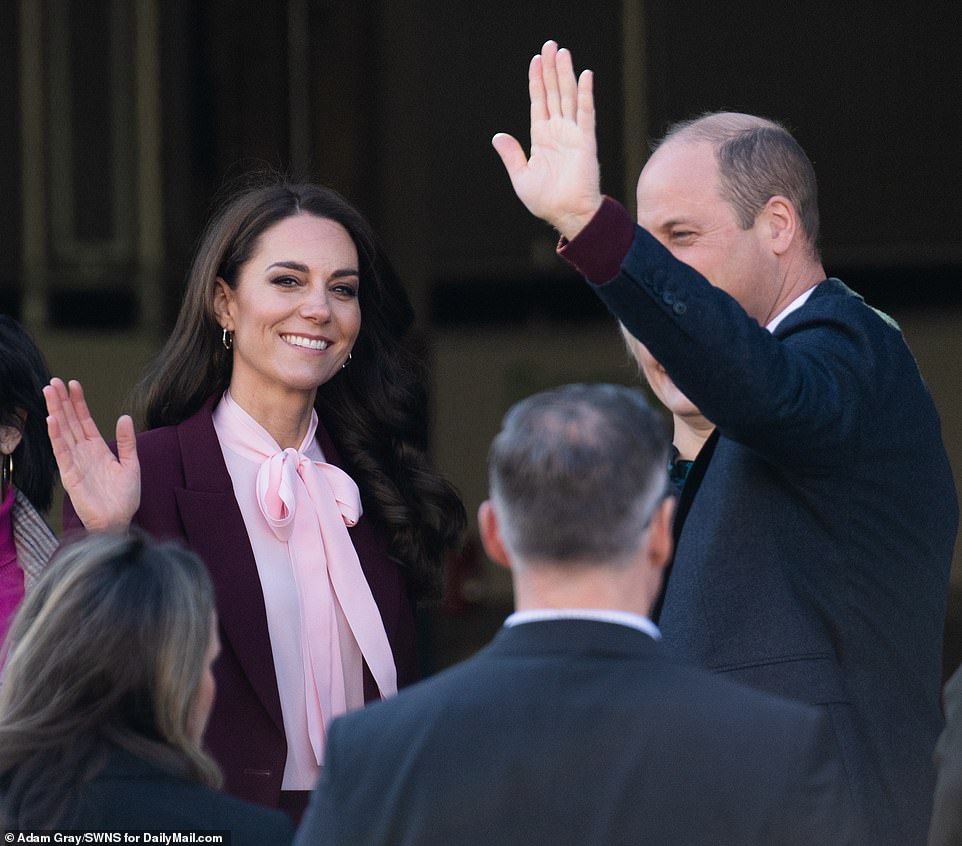 
Prince William and Kate Middleton put on a brave face today as they embarked upon the first full day of their whirlwind US tour – just a few hours after Prince Harry and Meghan released a very ill-timed trailer for their explosive Netflix documentary amid the Buckingham Palace race row.

The Duke and Duchess of Sussex dropped an explosive teaser for their upcoming Netflix show – which is part of their $100 million deal with the streaming giant – in which they shared an incredibly intimate series of never-before-seen images, including several of Meghan crying, while hinting that they are preparing to launch a fresh series of attacks on the royal family.

Harry and Meghan’s trailer release would have been controversy enough for William and Kate, both 40, to deal with on the second day of their tour – however their first US trip in eight years has already been dramatically overshadowed by a Buckingham Palace race row, which was sparked by the Prince’s own godmother.

Just hours before the Prince and Princess touched down in Boston to launch William’s Earthshot Prize, his godmother Lady Susan Hussey, 83, a former lady-in-waiting to the Queen, was accused of making racist comments to black domestic abuse campaigner Ngozi Fulani at a Buckingham Palace event on Tuesday night.

As William and Kate were mid-flight, their Kensington Palace spokesperson issued a statement condemning the ‘unacceptable’ comments made by Lady Hussey – who resigned from her role in the royal household – however the controversy has already cast a bleak shadow over what was meant to be a ‘Super Bowl’ moment for the Prince.

But despite the scandal, the royal couple were all smiles as they arrived at climate innovation company Greentown Labs on Thursday morning, waving to the waiting crowds of well-wishers who had gathered to catch a glimpse of the pair.

Kate, 40, smiled for the cameras as she made her way into climate innovation company Greentown Labs today for the first full day of her and William’s US tour – which has been dramatically overshadowed by the Buckingham Palace race row

The Princess of Wales, who wore a pretty pink pussy bow blouse under a burgundy blazer, was seen emerging from a hybrid Range Rover, specially selected to match the climate message of their trip

The Princess of Wales looked elegant in a burgundy suit, which she paired with a pretty pink pussy bow blouse and matching maroon heels, adding a touch of high-fashion flair in the form of a Chanel handbag.

Meanwhile Prince William matched his wife in a burgundy sweater, which he wore under a dark grey suit.

The couple pulled up outside of the venue for their first engagement of the day in a hybrid Range Rover, specially selected to match the climate message of their trip.

Both William and Kate flashed wide smiles for the cameras and the crowds as they arrived at Greentown Labs, where they were greeted by a host of fans – including a young boy who dressed up as one of the King’s Guards.

Henry Dynov-Teixeira, eight, was so impressed by the changing of the guard when he visited Buckingham Palace earlier this year that he asked his family for a costume – and was proudly wearing it, complete with bearskin, ahead of the Royal visit.

Young Henry is from Somerville, Massachusetts, where the Prince and Princess of Wales are visiting climate innovation company Greentown Labs today.

Henry, who goes to the British International School in Boston, told DailyMail.com: ‘I wanted this outfit because when we went to London we saw the changing of the guard at Buckingham Palace and I decided that I wanted that costume. I had never seen it before.’

Greentown Labs is located in Somerville, Massachusetts, which is around a 15 minute drive from Boston

William matched his wife in a burgundy sweater – and looked cheerful as he arrived at the venue, despite bracing for fresh attacks from his brother Harry in the Sussexes’ upcoming Netflix trailer

Last night, the Prince and Princess of Wales sat courtside at a Boston Celtics game, where they joined 20,000 fans cheering on the players as they went head-to-head with the Miami Heat.

On their first day in the city during a landmark US tour, William and Kate were brought into the TD Garden stadium to sit close to the action alongside the Celtics’ owners Wyc Grousbeck and wife Emilia Fazzalari.

Kate and William, who were also flanked by Massachusetts Governor-elect Maura Healey and Boston Mayor Michelle Wu, stood for the US national anthem, The Star-Spangled Banner, performed by a previous semi-finalist from the reality TV series The Voice.

The royal couple put on brave faces as faint boos could be heard around the arena when they were introduced by a stadium announcer and shown on the Jumbotron.

Other fans in the crowd could be heard loudly cheering ‘USA, USA’ when the Prince and Princess appeared on the screens above the court.

But the royal couple kept smiling and took photos with fans. They cheered on the high-scoring game as the packed crowd ramped up the atmosphere for the 17-time World Champions game against the Miami Heat.

Before the game, the royals met members of the ‘Celtics family’, including representatives of the Boston Celtics Shamrock Foundation, which provides grassroots programming and funding to local organizations serving at-risk or at-need populations.

The Prince of Wales looked like he was enjoying himself as he cheered on the Boston Celtics, with Kate flashing him a smile

They happily posed with fans during the basketball game, which saw the Celtics take on the Miami Heat

Around the arena, digital advertising boards were lit up green to promote Prince William’s Earthshot awards, while spectators were treated to a promotional video ahead of the game.

After the second quarter with the game tied 47 all, William and Kate watched as the Celtics honored their long- standing tradition of recognizing a ‘Hero Among Us’, highlighting individuals working to positively impact the community.

Ollie Perrault, a 15-year-old climate activist from Easthampton, Massachusetts, got to meet the royal pair after being cheered by the local crowd for her work as a leading member of the Youth Climate Leadership Program.

She is now the founder and director of Youth Climate Action Now, committed to fighting for environmental justice, and working to get more young people involved in direct climate action.

There is no doubting that William and Kate had hoped the evening’s match – the second in their official list of engagements during their whirlwind three-day trip to Boston – would go off without a hitch, given the awkward moment at the Earthshot launch just hours before the game.

As the Prince and Princess Wales watched on from the wings at the launch event, African-American Reverend Mariama White-Hammond, who founded a youth organization focused on ‘teaching the history of the civil rights movement’, said: ‘On this day, I invite us all to consider the legacy of colonialism and racism.’

She referenced the ‘ways it has impacted people across the world and its connection, its deep connection to the degradation of land and our planet that we are all seeking to reverse. The stories lost, the species made extinct, but also the persistence of people in the face of oppression and the fundamental dignity of all of our relations.’

It came after Lady Susan Hussey, former lady-in-waiting to the Queen and William’s own godmother, was accused of making racist comments to black domestic abuse campaigner Ngozi Fulani at a Buckingham Palace event on Tuesday night.

As the Prince and Princess Wales watched on from the wings at the launch event, African-American Reverend Mariama White-Hammond said: ‘On this day, I invite us all to consider the legacy of colonialism and racism’ amid the royal race row

Her speech came just hours after William’s Kensington Palace spokesperson condemned the ‘unacceptable’ comments made by his godmother, Lady Susan Hussey, at an event at Buckingham Palace on Tuesday night

Although there was no direct reference to Lady Susan, few could fail to connect the controversy with Reverend White-Hammond’s remarks.

Having started her speech by ‘acknowledging the ancestral lands we stand on today’, the Reverend went on to express gratitude to William and Kate for choosing to host this year’s Earthshot Prize in Boston.

‘Now you all know we are a city of many firsts. We are honored to be the first American city and the first city outside of the United Kingdom to host the Earthshot Prize,’ she continued.

Her comments about colonialism came just months after another of William and Kate’s international engagements – a March tour to the Caribbean to mark the Queen’s Platinum Jubilee – attracted controversy due to accusations that elements of it smacked of ‘colonialism’.

He and his wife will learn about the work that local organizations are doing to mitigate the risk of rising sea levels in Boston and they will also tour Greentown Labs, in the nearby town of Somerville, to get an insight into the development of innovative green technologies.

There are also plans for the royal couple to meet President Joe Biden on Friday, who will be in Boston on a separate trip.