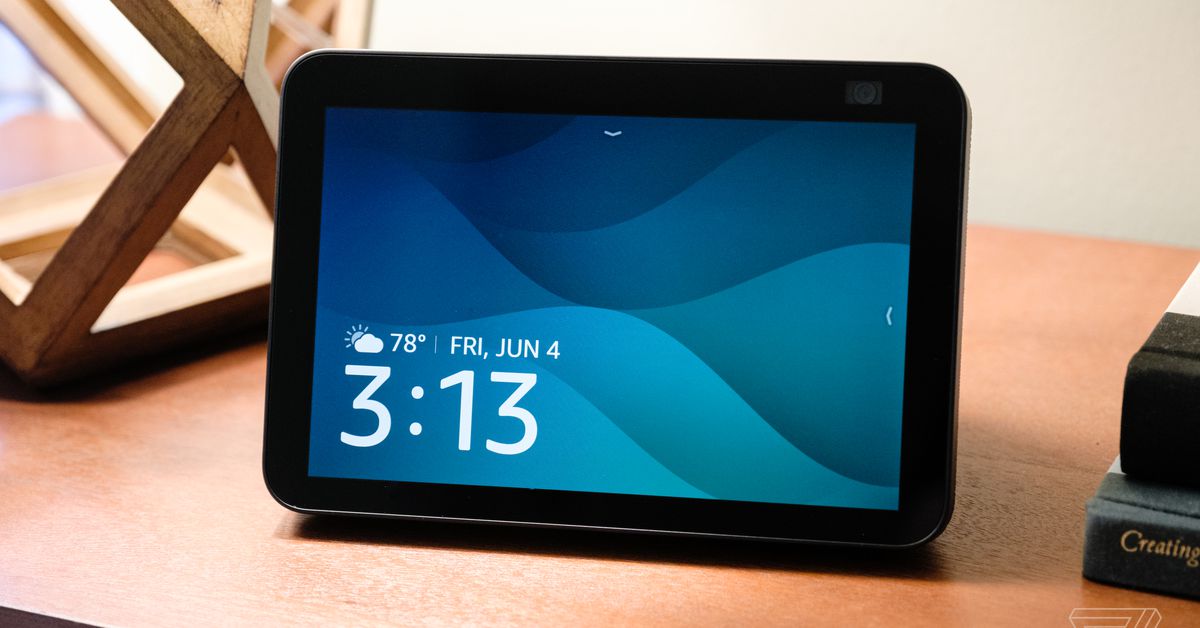 Cyber Monday is in the past, but some new and great tech deals have arrived for us to tell you all about. The flashiest one is a bundle from Amazon that pairs the latest Echo Show 8 with a free Kids Edition of the Echo Show 5 for $69.99, knocking $155 off the usual cost of buying both of these Alexa-powered smart displays.

The Echo Show 8 is still our favorite smart display in Amazon’s lineup, partially because it can make Zoom calls with its built-in camera, unlike the second-gen Echo Show 5. Its display, performance, and sound quality have the advantage over the smaller option, and it offers snappy performance for the price. Read our review.

The Kids Edition of the Echo Show 5 that you’ll get for free with this deal is virtually identical to the second-gen Echo Show 5, with some exceptions. It features integrated parental controls and sports an adorable chameleon pattern instead of the usual single solid color. Uniquely, the Kids model comes with a two-year warranty and a free year of Amazon Kids Plus, granting access to a kid-friendly library of books, games, videos, and other apps. Read our review.

An Amazon-exclusive bundle that pairs the Echo Show 8 with an Echo Show 5 Kids. The Kids model is identical to the second-gen Echo Show 5 but comes with a two-year warranty and a free year of Amazon Kids Plus.

Unlike the older, cheaper Nest Wifi that you should probably avoid buying at this point, the Nest Wifi Pro is compatible with Matter and Thread and supports Wi-Fi 6E. While the lack of an integrated Google Assistant in the nodes is somewhat disappointing (the Nest Wifi’s Points could do this), the Nest Wifi Pro is still a great option for providing fast and consistent Wi-Fi coverage for up to 6,600 square feet of space if you opt for the three-pack. Read our review.

The Nest Wifi Pro is an upgraded version of the standard model that’s equipped with Matter and Thread support in addition to Wi-Fi 6E connectivity.

Tired of telling your friends how good Willow and Andor are? Let them watch for themselves with the gift of Disney Plus, which is offering giftable ad-free annual subscriptions to the streaming service for $79.99. That price will go up to $109.99 on December 8th. Note that this deal is only good for new subscribers, and it can’t be tacked on to existing subscriptions. But there’s nothing stopping you from activating it through an alternate email. We won’t tell.

Disney Plus offers popular shows and movies like Thor: Love and Thunder, Andor, and more. New and returning subscribers can currently purchase an annual subscription for $79.99 before it increases to $109.99 on December 8th.

Razer’s latest iteration of the Basilisk wired gaming mouse, the Basilisk V3, is usually $69.99 but is discounted to $49.99 at Amazon and Best Buy. The V3 shares the same claw-shaped form factor as the rest of the Basilisk lineup but is equipped with a new scroll wheel that can speed up depending on how hard you flick it in either direction. The V3 has the same 11 programmable inputs and RGB underglow seen on older wired versions of the Basilisk but makes some small improvements to the sensor, using a 26K DPI sensor instead of the 20K sensor used on the V2.

Compared to the Basilisk V2, Razer’s latest iteration makes a few improvements, including an impressive scroll wheel that can ramp up speed depending on how hard you scroll. It also sports more RGB LEDs.

The Jabra Elite 7 Pro earbuds are currently discounted to $99.99 at Best Buy and Amazon, matching the same price we saw through Black Friday and Cyber Monday. This model lacks some features of the Elite 7 Active, like waterproofing and the grippy exterior, but we like the 7 Pros for their good voice call performance. While we initially knocked them for their lack of multipoint Bluetooth support, a firmware update has since ironed out that particular wrinkle. Read our review.

The highest-end version of Jabra’s new Elite series of earbuds, the Elite 7 Pro, build upon the 85t with a more compact fit while keeping many of the features that made their predecessor so good.

Normally $179.99, the CyberPower CP1000 UPS is currently on sale for $129.99 at Woot. A universal power supply (UPS) isn’t the sexiest tech purchase to make, but think of it as an extra lifeline for your most precious electronics. The CP1000’s built-in battery should allow a couple of devices to remain powered on long enough to safely shut them down in the event of a power outage or fluctuation. The UPS is equipped with a total of five battery backup outlets, an additional five surge protection outlets, and a USB-A port and USB-C port on its front that can be used to keep your phone or other small devices charged during an unplanned outage.

The CyberPower CP1000 UPS provides automatic voltage regulation and a battery backup for sensitive electronics in the event of an emergency. It provides surge protection for up to 10 devices, with five supplied with backup power.

A number of Anker charging accessories were marked down over Black Friday and Cyber Monday, but several of them are even cheaper now. For example, Anker’s 65W GaNPrime charger, which is normally $59.99, is currently available for around $46 on Amazon when you clip the on-screen coupon before checkout. The Anker 735 Charger comes equipped with two USB-C ports and a single USB-A port. It allows you to charge one device at up to 65W or to divvy that power among three devices simultaneously. Sixty-five watts is enough power to charge the current generation of Apple and Android devices, some laptops, and handhelds like the Nintendo Switch or Steam Deck.

Anker’s 65W USB-C / USB-A charger measures roughly the size of an AirPods Pro case yet can charge up to three devices simultaneously (including some laptops).

Not all power banks need to be bulky accessories. For an option that’s slim and svelte, you can currently get the Anker 511 Power Bank directly from Anker for just $19.99 (half off) when you use the code TLANKER50 at checkout. This power bank isn’t much larger than a roll of coins, and it has a built-in lanyard if you want to keep it tied to something. It seems like an easy addition to your everyday carry bag, and it might come in handy if you’re traveling for the holidays. The 511 Power Bank has a single USB-C port with a 20W output, and it supports passthrough charging so you can top off your device while the power bank is plugged into a wall outlet. The 511’s 5,000mAh capacity is on the small side, but it’s more than enough to top off an iPhone 14, with juice to spare.

Anker’s pocket-size 20W 5,000mAh power bank features passthrough charging and a single USB-C port. Use the code TLANKER50 at checkout for a $20 discount.

And one last thing…

Share
Facebook
Twitter
Pinterest
WhatsApp
Previous article
Scientists develop a smartwatch for COWS that can monitor their health, reproductivity and location
Next article
Flu batters the NHS: 40% jump in hospital cases in a week
- Advertisement -