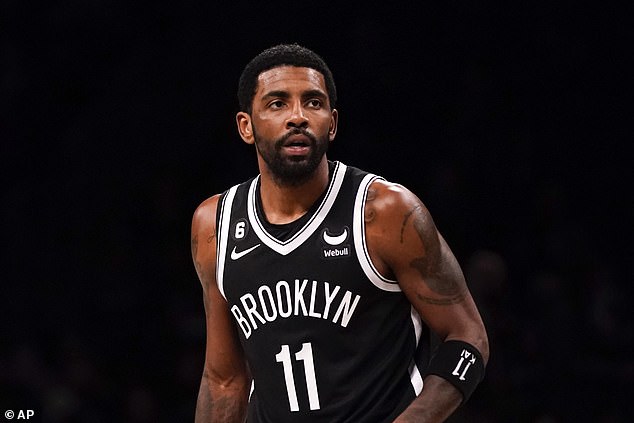 
Brooklyn Nets guard Kyrie Irving is no longer a Nike athlete after the sportwear giant ended its relationship with the NBA star.

The two sides have parted ways one month after Nike suspended its partnership with Irving in the wake of the player’s anti-Semitism row, according to Shams Charania.

Irving faced criticism and backlash after sharing a link to the Amazon page for the 2018 film ‘Hebrews to Negroes: Wake Up Black America’ which contained anti-Semitic tropes.

Nike cut its ties with Irving in November after he initially refused to apologize for his controversial tweet.

In a statement, the company said it was ‘deeply saddened and disappointed by the situation’.

The brand also said it would not launch the Kyrie 8s – the shoe designed by the player and company – which were set to be released later in November.

Irving signed with Nike in 2011 and has had a signature line of shoes since 2014, with his annual endorsement deal believed to be worth at least $11 million.

Irving has one of the most popular signature shoes in the NBA and is now a sneaker free agent.

Nike co-founder and chairman Phil Knight had suggested soon after the suspension if the partnership that the relationship between the brand and Irving was ‘likely over.’

‘I would doubt that we go back. But, I don’t know for sure,’ Knight said in an interview with CNBC.

‘Kyrie stepped over the line. It’s kind of that simple. He made some statements that we just can’t abide by, and that’s why we ended the relationship. And, I was fine with that.’

Irving had also been suspended by the Nets after he initially failed to apologize for the controversial tweet.

Irving was suspended by the team on November 3 for a minimum of five games, hours after he refused to say he had no anti-Semitic beliefs when meeting with reporters at the Nets’ practice facility.

Irving offered a belated apology following his suspension, but only after several contentious exchanges with the media. In one instance, he told reporters: ‘I’m not going to stand down on anything I believe in.’

Irving missed eight games through suspension before apologizing again on November 20 to anyone who felt threatened or hurt when he posted the link to the documentary with anti-Semitic material, clearing the way to finally play again for the Nets.

‘I’ve got to leave that to my legal team and leave it to the warriors I have around me,’ Irving said Sunday after returning from his eight-game suspension, as quoted by The New York Times. ‘I have strong people, men and women around me that are going to do everything possible to make sure that I am protected and my family is protected and we protect one another.

‘So you know, I’m sure some things will be done in the future. There’s no timetable on that right now.’

Since then, Irving’s former Boston Celtics teammate, NBPA vice president Jaylen Brown, hinted that the players’ union is displeased over his punishment, which included a number of requirements, including a sit-down meeting with Jewish leaders.

At issue, Brown told the Boston Globe, is that the NBA’s collective-bargaining agreement does not offer any guidance on player punishments for posting on social media.

‘There is an interesting distinction between what somebody says verbally and what somebody posts as a link on a platform with no description behind it,’ Brown last month. ‘Some people will argue there’s no difference and some people will argue there is a difference. There’s no language in our CBA. There’s no rules against it. This is uncharted territory for everybody, and everybody is trying to figure out the difference between the two.’

The franchise said he was ‘unfit to be associated with the Brooklyn Nets’ when it suspended him. But the Nets praised Irving before his return for the steps he has since taken, though it’s unclear what those entailed.

‘Kyrie took ownership of this journey and had conversations with several members of the Jewish community,’ the team said in a statement. ‘We are pleased that he is going about the process in a meaningful way.’