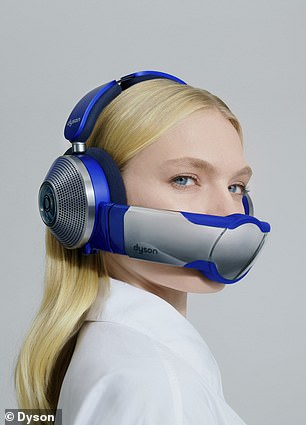 
Take a deep breath, Dyson’s first pair of noise-cancelling, air-purifying headphones will go on sale in the UK in March, starting at £749.

The Dyson Zone were first unveiled earlier this year as the UK-founded firm’s unique take on combating noise and air pollution in urban areas around the world.

The headphones come with active noise cancellation to cut out noise around the wearer, and a detachable visor that pumps out filtered air.

The visor sits over the wearer’s nose and mouth and pumps out filtered air to help cut exposure to air pollution.

The headphones come with active noise cancellation to cut out noise around the wearer, and a detachable visor that pumps out filtered air

HOW DOES IT WORK?

Compressors in each ear draw air through built-in filters, which capture ultrafine particles such as allergens and brake dust.

The compressors then project two streams of purified air to the wearer’s nose and mouth through the visor.

It can also be lowered to expose the wearer’s moth when speaking, or detached completely when not in use.

The Zone headphones will initially launch in China in January, before coming to the UK, Ireland, the US, Hong Kong, and Singapore in March.

The headphones are in response to data which shows that one in five people in the EU are affected by noise pollution and that 99 per cent of the world’s population live in areas that exceed the World Health Organisation’s safe levels for pollution.

The Dyson Zone’s filtration system can capture 99 per cent of particles as small as 0.1 microns, including pollen, dust and bacteria, as well as viruses.

The compressors then project two streams of purified air to the wearer’s nose and mouth through the visor, which doesn’t touch the face like traditional face masks.

However, the filters in the ear caps will need to be replaced up to every 12 months to keep the air purification system working.

A notification from the MyDyson app, which connects to the headphones, will inform the user when replacement is necessary, and changing them over can be done at home.

Users will also be able to adjust airflow speed and audio modes, as well as track the different levels of air quality they encounter, with the MyDyson app.

Unlike face masks, it delivers a plume of fresh air without touching the face, using high-filters and two miniaturised air pumps

Air purification: Air is drawn in through dual-layer filters in the earcups, purified with Dyson two-stage purification technology and directed out towards the wearer’s mouth and nose.

Contact-free visor: The visor itself has been designed to not touch your face — the clean air flows in a stream to your mouth and nose to prevent the visor from getting uncomfortable. The visor is completely removable, if the wearer just wants to listen to music.

High-quality sound: Dyson Zone comes with active noise-cancelling as a result of its cushions that mould around the listener’s ear as well as audio technology.

Dyson says the headphones offer up to 50 hours of audio-only battery life, or around four hours of combined audio and air purification run time.

Data from eight microphones monitoring the surrounding noise enables them to reduce the sounds of the city by 38dB.

They can also play audio in the frequency range of 6Hz to 21kHz.

The headphones can be charged using a USB-C cable, and can go from zero to 100 per cent battery in three hours.

Dyson said the device takes inspiration from ‘the shape and design of a horse’s saddle’, by distributing weight over the sides of the head, rather than on the top.

The firm says: ‘A saddle typically curves over the horse’s spine distributing the load through contact with the areas left and right of the backbone – a format used for the central cushion on the headband.’

When the Dyson Zone headphones were first unveiled earlier this year, the company’s chief engineer, Jake Dyson, said: ‘The Dyson Zone purifies the air you breathe on the move.

‘Unlike face masks, it delivers a plume of fresh air without touching your face, using high-performance filters and two miniaturised air pumps’.

The British firm has said that developing a non-contact solution was a must for its engineers, to avoid the discomfort and irritation often associated with masks that touch the face.

Their headphones are the result of six years of development and more than 500 prototypes.

They were originally a ‘snorkel-like’ clean air mouthpiece paired with a backpack to hold the motor and inner workings.

They then measured the pollution level within each manikin’s nose and throat to determine the headphones’ filtration efficacy of that type of particle.

The Dyson Zone’s filtration system can capture 99 per cent of particles as small as 0.1 microns, including pollen, dust and bacteria, as well as viruses

Dyson says the headphones offer up to 50 hours of audio battery life, or around four hours of combined audio and air purification run time

Dyson warns that the world’s urban population continues to grow, resulting in a poorer quality of air to breathe as soon as we step out our homes.

According to the World Health Organisation (WHO), nine in 10 people globally breathe air that exceeds its guidelines on pollutant limits.

In January 2022, people living in London were advised not to exercise outdoors due to high levels of pollution.

Also, around 100 million people in Europe are also said to be exposed to long-term noise exposure above its recommended level.

It’s estimated that more than 100 million people, around 20 per cent of the European population, are exposed to long-term noise exposure above WHO guidance.

WHAT ARE THE EFFECTS OF THE WORLD’S MAJOR AIR POLLUTANTS?

According to the Environmental protection Agency, there are six major pollutants which can impact on human health and well-being.

These particles come in many sizes and shapes and can be made up of hundreds of different chemicals.

Some are emitted directly from a source, such as construction sites, unpaved roads, fields, smokestacks or fires.

Fine particles (2.5 parts per million)are the main cause of reduced visibility (haze) in parts of the United States, including many of our treasured national parks and wilderness areas.

Carbon monoxide: Breathing air with a high concentration of CO reduces the amount of oxygen that can be transported in the blood stream to critical organs like the heart and brain.

At very high levels, which are possible indoors or in other enclosed environments, CO can cause dizziness, confusion, unconsciousness and death.

It forms from emissions from cars, trucks and buses, power plants, and off-road equipment.

Breathing air with a high concentration of NO can irritate airways in the human respiratory system. Such exposures over short periods can aggravate respiratory diseases, particularly asthma, leading to respiratory symptoms (such as coughing, wheezing or difficulty breathing).

Sulfur dioxide: The largest source of Sulfur dioxide in the atmosphere is the burning of fossil fuels by power plants and other industrial facilities.

Short-term exposures to SO can harm the human respiratory system and make breathing difficult. Children, the elderly, and those who suffer from asthma are particularly sensitive to effects of SO.

Ground-level Ozone: The ozone layer in the lower area of the lower portion of the stratosphere, approximately 12 to 19 miles above the surface of the planet (20 to 30 km).

Although ozone protects us against UV radiation, when it is found at ground level it can cause health problems for vulnerable people who suffer from lung diseases such as asthma.

It is created by chemical reactions between oxides of nitrogen (NOx) and volatile organic compounds (VOC) – that are found in exhaust fumes – in the presence of sunlight.

Lead: Major sources of lead in the air are ore and metals processing and piston-engine aircraft operating on leaded aviation fuel.

Other sources are waste incinerators, utilities, and lead-acid battery manufacturers. The highest air concentrations of lead are usually found near lead smelters.

Depending on the level of exposure, lead can adversely affect the nervous system, kidney function, immune system, reproductive and developmental systems and the cardiovascular system.

Infants and young children are especially sensitive to even low levels of lead, which may contribute to behavioural problems, learning deficits and lowered IQ.

Share
Facebook
Twitter
Pinterest
WhatsApp
Previous article
Women’s basketball: ‘I’ve been spat at in the face for the colour of my skin’
Next article
Sir Chris Whitty demands more action to crack down on ‘everyone’s problem’ of air pollution
- Advertisement -

What do planets SOUND like? Hear the noises picked up by Nasa satellites as they passed every planet

Cryptocurrency for dummies: Everything you need to know about digital assets

Can YOU guess what they are? AI reimagines popular brand logos in the style of famous artists