Editorial: A big thanks, once again, to Georgia’s overworked voters 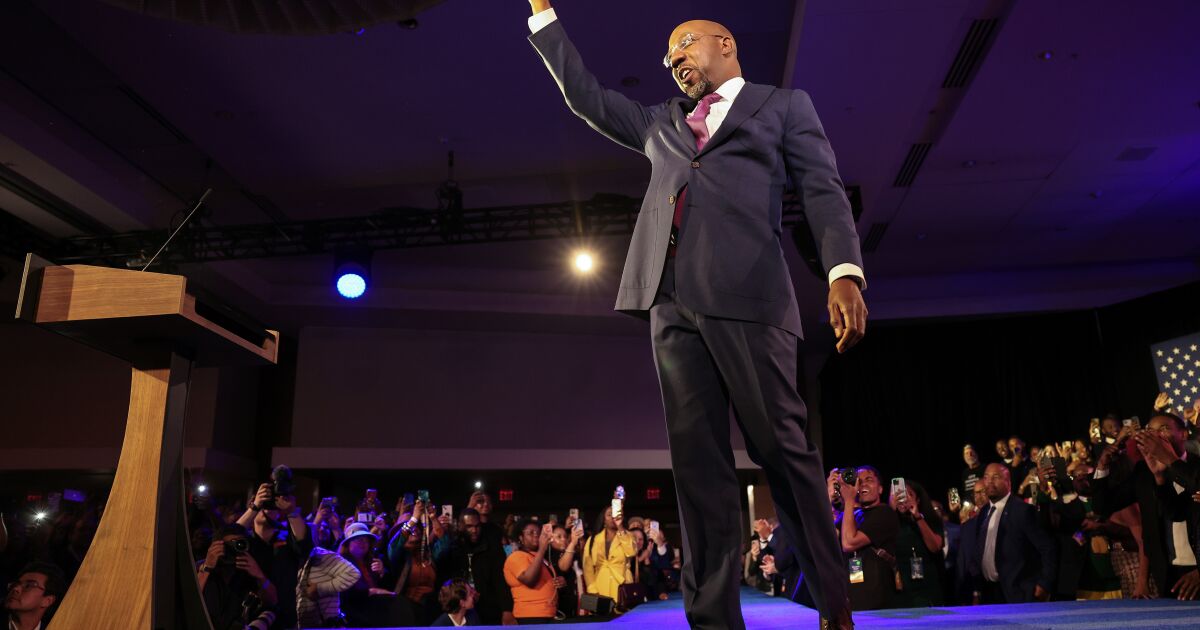 Warnock’s victory means that Democrats, who already had been assured control over the Senate after winning 50 seats in November, will possess a majority not dependent on the ability of Vice President Kamala Harris to break a tie. The 51-vote majority will translate into an edge for the party on committees that will make it easier for President Biden to win confirmation of his nominees; it also will reduce the ability of one or two dissident Democrats to act as spoilers.

This turn of events is welcome not because it is always desirable for Democrats to control the Senate (or the House, for that matter), but because of contemporary political realities.

Chief among them is the fact that, thanks in large part of the malign influence of Donald Trump, the Republican Party lamentably offers haven to extremists and opponents of democracy. That is obviously the case in the House, where Republicans will have a thin majority in the next Congress, but also in the Senate, despite the willingness of some Republicans to engage in bipartisan legislation.

The defeat of Walker, a comically flawed candidate pushed by Trump, might also contribute — one can certainly hope — to a waning of the former and would-be future president’s influence in his party and in the country.

Walker’s loss follows the defeat of other high-profile Trump-backed candidates in November, such as U.S. Senate candidate Mehmet Oz and Kari Lake in the Arizona gubernatorial race. It also coincides with other developments that threaten finally to break the spell Trump has cast over his party, including a special counsel’s investigation and the denunciation by at least some Republicans of Trump’s unhinged assertion that the Constitution ought to be “terminated” in the service of his deranged fantasies about a stolen 2020 election.

Relief about Warnock’s victory must be tempered, of course, by the closeness of the final vote. In a race with two such unmatched opponents, Warnock, a thoughtful clergyman who boasted of his bipartisan approach to legislating, should have trounced Walker, whose main “credential” for holding public office was a stellar football career. That the outcome was so tight — 51.4% to 48.6% with most of the votes in — reflects the persistence of a poisonous partisan tribalism.

Partisanship also played a part in the enactment of the Georgia election law under which the runoff was conducted. Among other provisions, the law pressed by Republicans and signed by GOP Gov. Brian Kemp reduced the time frame in which runoff elections are held. That turnout was robust anyway doesn’t validate restrictions in the law or arrangements that resulted in long lines at polling places.

As Warnock said in his victory speech: “Just because people endured long lines that wrapped around buildings, some blocks long, just because they endured the rain and the cold and all kinds of tricks in order to vote, doesn’t mean that voter suppression does not exist. It simply means that you the people have decided that your voices will not be silenced.”

The Constitution says that the “times, places and manner of holding elections for senators and representatives shall be prescribed in each state by the Legislature thereof” — a provision whose meaning was argued before the Supreme Court on Wednesday. But that same provision says that Congress “may at any time by law make or alter such regulations.”

Relying on that authority, the Democratic-controlled U.S. House in 2021 passed legislation that would set national standards for federal elections; it included provisions affecting voting by mail and early voting. The prospects for enacting such major national legislation appear dim at the present time.

But if Georgia and other states continue to make voting unnecessarily difficult, Congress must act. Meanwhile, as Warnock rightly recognized, voters must insist on making their voices heard, whatever impediments or inconveniences are laid in their path. Georgia voters did that on Tuesday, and for that they deserve our thanks.