Harry and Meghan’s attack on ‘racist’ Britain: Prince says the Royal family is ‘part of the problem’ 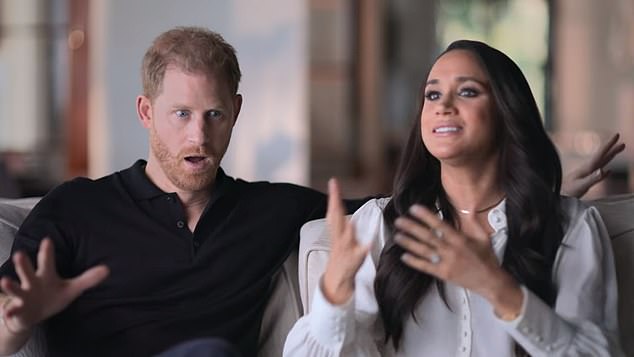 
Harry and Meghan’s bombshell Netflix documentary today unleashed a series of incendiary claims labelling Britain a ‘racist’ country – and linking the debate over Brexit to racism and ‘horrible views’.

In one segment, Harry says the Royal Family has ‘unconscious bias’, and is ‘part of the problem’ when it comes to racism in Britain.

Lengthy segments are also given to academics Afua Hirsch and David Olusoga who say British tradition is ‘filled with racist imagery’ while discussing the country’s colonial legacy – and call anti-immigration sentiment in the UK a ‘cipher for race’.

The accusations are levelled across the first three hour-long episodes of Harry & Meghan, which dropped at 8am on Thursday.

The Commonwealth, much-loved by the late Queen, is branded ‘Empire 2.0’ by Ms Hirsch, while author Kehinde Andrews claims ‘nothing has changed’ from the UK’s colonial past, apart from the Royal Family’s ‘better PR’.

The commentators suggest this racist legacy made it difficult for Meghan to be both assimilated into the firm and widely accepted and loved by the British public.

Even the UK’s departure from the EU is dragged into the fray, as Harry says the series is not ‘just about our story’, adding: ‘This has always been much bigger than us’, amid the back drop of a Brexit protest followed by former-PM Boris Johnson vowing to ‘take back control of this country.’

The visuals point to racism being a key factor behind the Brexit vote and suggest the wider political climate was hostile to Meghan becoming a royal.

‘Send them back home’: A man spouting anti-immigration rhetoric is featured in Harry and Meghan’s Netflix documentary

‘Go back to Africa’: A racial attack on a bus is featured in Harry and Meghan’s Netflix documentary

The debate around Brexit is revisited at the end of episode two. Mr Olusoga says that the ‘fairy tale’ of Harry and Meghan was ’embedding itself in a nation that is having a pretty toxic debate about the European Union.’

Harry then says: ‘So the EU commissioned a report in 2016, exactly the same time that our relationship became public. It warned that if the government wasn’t going to do something, or if the media aren’t going to sort themselves out, that a culture war that had already existed was going to become huge and become a real problem.’

Former Palace spokesman James Holt adds: ‘It was a perfect storm that gave credence to jingoism and nationalism and gave people with really horrible views of the world a little bit more strength and confidence to say what they wanted to say and do what they wanted to do.’

Asked about Prince Harry’s comments about the EU referendum, the Rishi Sunak’s official spokesman said today: ‘I haven’t put those specific points to the Prime Minister but the British people made a decision, a democratic decision, which the Government has enacted based on taking control of things like our borders and our laws, which again, we have delivered.’

Even the UK’s departure from the EU is dragged into the fray, as Harry says the series is not ‘just about our story’, adding: ‘This has always been much bigger than us’, amid the back drop of a Brexit protest (pictured) followed by former-PM Boris Johnson vowing to ‘take back control of this country’

In the same episode, Meghan tells interviewers she felt a shift in treatment after moving to the UK.

‘At that time, I wasn’t thinking about how race played a part in any of this,’ she said. ‘I genuinely didn’t think about it.

‘It’s very different to be a minority but not be treated as a minority right off the bat…I’d say now, people are very aware of my race because they made it such an issue when I went to the UK.

‘But before that, most people didn’t treat me like a ”black woman.” So that talk didn’t happen for me.’

In the third episode, the Sussexes chart their relationship with the media from the announcement of their engagement in 2017 right up until the day before their wedding in May 2018.

It touches on Britain’s ‘racist past’ and various scandals to have hit the firm in recent years – including Princess Michael of Kent’s ‘Blackamoor-style’ brooch and Harry’s Nazi uniform furore.

Experts, authors and friends – including Meghan’s mother Doria and Serena Williams – are called upon to comment on how Britain’s history, the press and expectations from royal fans impacted the couple.

In the opening segment, Meghan claims ‘we’ve never been allowed to tell our story… until now’.

Mr Olusoga, author of Black and British, then tells interviewers: ‘Who dreamed that Britain would have a black princess? Who could have conceived that? It was the conclusion to a history that was so improbable, as to be astonishing.’

He and fellow author Afua Hirsch give a brief history lesson on Britain’s role in the Atlantic Slave trade and how it ‘fuelled’ the British empire, which was ‘financed by kings and queens right up until its abolishment’ in the early 1800s.

Ms Hirsch said Britain is often described of having its ‘own deep south’ that was ‘just as brutal’ as the US’s and that ‘actually enslaved more Africans’ than the Americans did, but that that deep south was the Caribbean.

But ‘it was out of sight and out of mind,’ she said, adding that the first slave voyage was ‘personally financed’ by Queen Elizabeth I and continued to be financed by kings and queens until abolishment.

According to Mr Olusoga, the fact that slave owners were then compensated to the tune of £20million ‘for their human property’ is often ‘left out’ of history lessons, which he said is ‘just another way in which our memory of British slavery has been airbrushed out of Britain’s story.’

James Holt, former Palace spokesman, tells producers he was ‘oblivious’ to the legacy of Britain’s links to the slave trade, claiming his teachers focused on the UK’s colonial power and ‘just how important the country used to be globally.’

Linking back to Harry and Meghan’s engagement, Mr Olusoga says he felt it could have shown the Royal Family had ‘caught up with the rest of Britain.’

Then recalling her first Christmas at Sandringham, Meghan said she found it ‘amazing’ as she was ‘with a big family like I always wanted.’

‘And there was just this constant movement, energy and fun,’ she adds, ‘and at dinner I was sat next to H’s grandfather and I just thought it was so wonderful and I was like ”we chatted about this and this”… and he [Harry] was like ”you had his bad ear he couldn’t hear anything you were saying” and I was like ”oh… well I though it went really well.”’

But things went awry when reports emerged that the Princess Michael of Kent wore a ‘Blackamoor-style’ brooch to the Queen’s annual Christmas lunch  – which was widely viewed as ‘racist’.

Harry then says: ‘In this family, sometimes you are part of the problem rather than part of the solution. There is a huge level of unconscious bias.

‘The thing with unconscious bias, it is actually no one’s fault. But once it has been pointed out, or identified within yourself you then need to make it right.

‘It is education. It is awareness. It is a constant work in progress for everybody, including me.’

Harry then spoke about when he wore a Nazi uniform to a private party in 2005.

He said: ‘It was probably one of the biggest mistakes of my life. I felt so ashamed afterwards. All I wanted to do was make it right.’

James Holt (pictured), former Palace spokesman, tells producers he was ‘oblivious’ to the legacy of Britain’s links to the slave trade, claiming his teachers focused on the UK’s colonial power and ‘just how important the country used to be globally.’

He said he spoke to a chief Rabbi in London which ‘had a profound impact on me’ before visiting a holocaust survivor in Germany, adding that he ‘learnt from’ his mistake.

Discussing his decade-long stint in the army and describing how that time ‘burst’ the bubble of his life in the royal family.

After footage of him meeting US servicemen and women, Harry says: ‘Working and living with normal people – and I fully appreciate my life is not normal – certainly has an effect on you. The bubble within the bubble that I was brought up in got burst.’

The episode later reverts back to Britain’s colonial past as it gives a brief description of the founding of the Commonwealth.

Author Robert Hazell says the British monarchy is unique in that it is an ‘international monarchy’ as the King is the head of state in countries around the world.

The commonwealth is described as one the great ‘justifications’ for the continuation of the monarchy, but author Kehinde Andrews says nothing has changed since colonisation, only that the royal family uses ‘better PR’.

She said it created a ‘privileged club of formerly colonised nations called the Commonwealth’, which she said is still described as a ‘club of friends who share common values’.

She adds: ‘I find that language really problematic, I sometimes call the Commonwealth Empire 2.0, because that is what it is.’

Mr Andrews then adds: ‘They’ve not changed a thing they’ve just got better PR. If you look at the black people in the Commonwealth the conditions are almost just as bad as they were 50 years ago or 100 years ago.’

Ms Hirsch says the former colonies’ wealth was ‘extracted’ and that this is the root of the poverty plaguing some of the communities today.

‘And yet the current narrative in Britain is that it’s all history and there’s no point looking back. It’s incredibly painful for the very many millions of British people who have a different memory of empire in their personal background.’

‘And yet here was a woman who just looked like most of the people in the Commonwealth,’ author Mr Olusoga added, ‘Meghan represented something… there was a hope that maybe this was a way of having these difficult conversations that had been pushed away so many times.’

The episode then tells the story of the murder of Stephen Lawrence and shows Harry speaking at a memorial to him, 26 days before his and Meghan’s wedding.

She added: ‘It represented a direct attempt to speak to the pain many people still feel as a result of the murder of Stephen Lawrence.

‘And that was really welcomed by many black communities in Britain. I always perceived Prince Harry as just another senior royal, a little bit racist, very ignorant.

‘But I have watched him on this journey and seen that he has really embraced the education that is required for someone like him to transform himself into an anti-racist.’