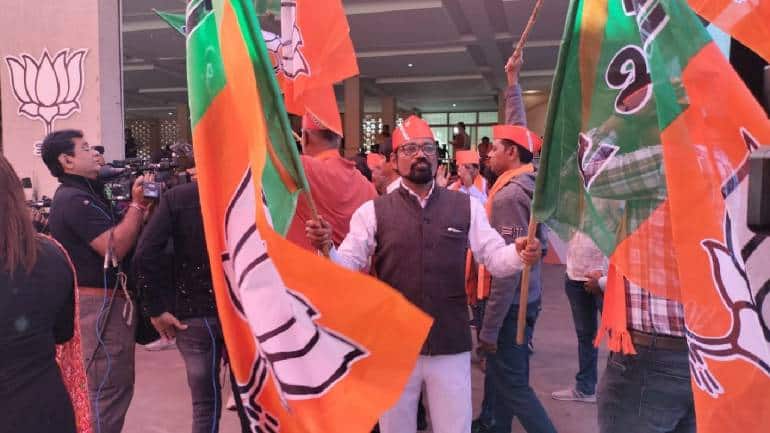 Riding on the Modi factor, the Bharatiya Janata Party (BJP) is confident of retaining power in Gujarat while the Aam Aadmi Party (AAP) is looking to make a strong debut and Congress is seeking a favourable verdict as the counting of votes in the Assembly elections is underway. (Image: News18)

Bharatiya Janata Party (BJP) candidate Yogesh Patel on Thursday appeared on course to wrest the Anand assembly constituency in Gujarat from the Congress.

Patel was leading by over 40,000 votes after 22 rounds over Kanti Sodha Parmar of Congress in Anand, which gave the world the famous ‘Amul’ dairy brand.

The Congress and the BJP were locked in a neck and neck fight for the seat which the former had won in 2017 after a gap of 25 years.

Parmar, sitting Congress MLA, had bagged the Assembly segment in 2017 by little over 5,000 votes after three failed attempts.

As many as 15 candidates were in fray in Anand, which is among seven Assembly constituencies of Anand district, but the real fight was between Parmar and Patel.

There are 3,13,857 voters in the Assembly constituency which consists of Anand, Karamsand and Vidyanagar municipalities and 14 villages. Out of the 14 villages, five borders Anand city and are semi-urban centres now.

Farming of tobacco, banana and capsicum is the main source of livelihood for people in Anand, which houses the world famous co-operative dairy ‘Amul’ and also has an educational hub in Vidyanagar.

Prime Minister Narendra Modi had addressed a massive rally in Vidyanagar before the election dates were announced and Chief Minister Bhupendra Patel had accompanied Yogesh Patel when he filed nomination papers.

Modi also addressed a rally during the campaigning in Anand, which voted in the second phase on December 5.

“This result shows how seriously the BJP takes the Anand assembly constituency as it wanted to wrest the seat from the Congress,” said a local party leader.

In local body elections since 2017, the BJP won 36 of the 52 seats in the Anand municipality, 18 of the 28 seats in Karamsad and all the 24 seats in Vidyanagar.

Seven of the 11 taluka panchayats and both Zilla Panchayats are also with the saffron outfit.

Karamsad in Anand district is the birthplace of Sardar Vallabhbhai Patel.

There is 100 per cent literacy in the Anand Assembly constituency.