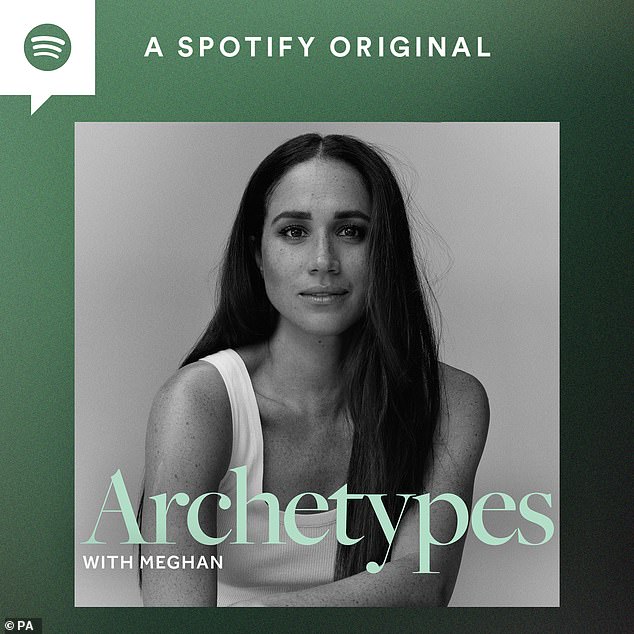 
‘Your support means the world’: Meghan Markle thanks listeners after her Archetypes podcast won People’s Choice Award on eve of release of bombshell Netflix documentary

By Jamie Phillips For Mailonline

The Duchess of Sussex has shared a statement thanking listeners and voters after winning a People’s Choice Award on the eve of her bombshell Netflix documentary with Prince Harry.

Meghan’s Archetypes podcast, produced as part of an £18million deal with Spotify, has been named the Pop Podcast of 2022 at the People’s Choice Awards.

The podcast received the award during a show at the Microsoft Theatre in Los Angeles last night.

And in a statement released this evening, the duchess said the support of her listeners ‘means the world’.

She said: ‘Thank you to all the supporters and fans of Archetypes who voted for us for this special People’s Choice Award.

‘I loved digging my hands into the process, sitting up late at night in bed, working on the writing and creative.

‘And I loved digging deep into meaningful conversation with my diverse and inspiring guests, laughing and learning with them, and with each of you listening.

‘It has been such a labor of love with an amazing team who were each instrumental in helping to bring this series to life.

‘Special thanks to Terry Wood who was my right hand in this special project, along with Catherine, Rebecca, Andy, Matt, and the wider team who all worked hard to make each moment resonate.

‘Above all, huge thanks to each of you who voted. Your support means the world.’

The first season of Meghan’s podcast has seen her joined by guests including Mariah Carey, Serena Williams, Jameela Jamil and Paris Hilton.

The duchess was not present to accept the award as she attended the Ripple of Hope Gala in New York City.

Meghan could be seen taking hold of Prince Harry’s hand as he put his arm around her shoulder, just before the pair took the stage to accept an ‘anti-racism’ award.

Seated alongside Meghan onstage, Harry discussed the importance of storytelling, saying ‘ultimately we live in this world now where sharing experiences and sharing stories has an enormous impact’, adding it was important to undertake ‘if you are in a position of influence, leadership, or otherwise’.

The couple were very animated as they spoke before the crowd, breaking up in laughter together at times and exchanging loving touches at others.

The couple is attending the gala – for which tickets were being sold for up to $1 million each – to accept the human rights award from the Robert F. Kennedy Human Rights Foundation, a prize previously won by Barack Obama and Hillary Clinton. Onstage they were interviewed by Kerry Kennedy, president of the foundation and daughter of its namesake.

The couple were very animated as they spoke before the crowd, breaking up in laughter together at times and exchanging loving touches at others

Meghan went all out with her ensemble for the evening, opting to wear a custom-made form-fitting white Louis Vuitton gown that left her shoulders completely exposed, and also featured a racy thigh-high split that flashed her lean legs as she strutted through the Manhattan rain.

It came just hours before the launch of the couple’s explosive Netflix series, after incendiary trailers promoting their forthcoming documentary dropped in which they hinted that Buckingham Palace leaked and ‘planted’ negative stories about them.

Harry alleged the couple had suffered from leaks and planted stories that backed up the Royal Family ‘hierarchy’.

But royal sources insist it was ‘absolutely wrong’ to suggest Harry and Meghan had been briefed against and ‘unprecedented steps’ had been taken to support them.