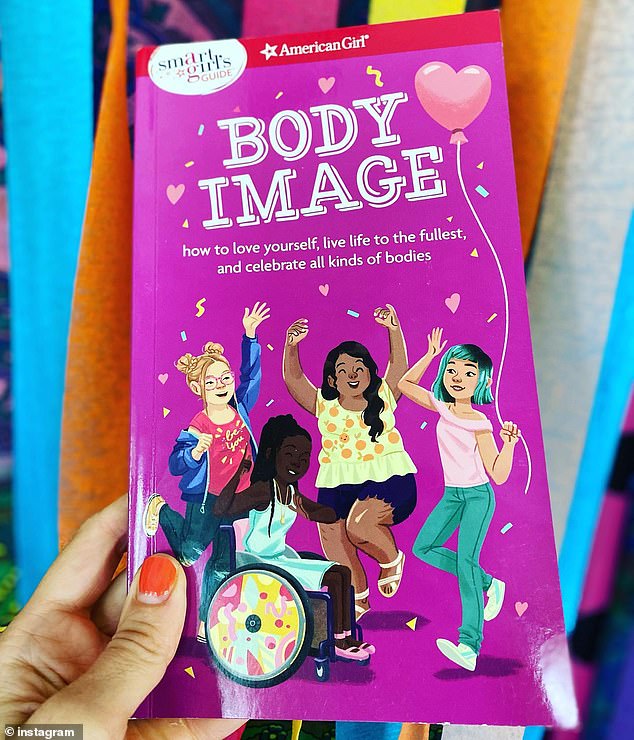 
The owner of the American Girl Doll brand, toy giant Mattel, has refused to explain why the company has published a book promoting puberty blockers amid a growing backlash from parents.

A Smart Girl’s Guide: Body Image was released on November 1 and targeted at children ages 3-12. The book contains advice about how to change gender – without their parents’ blessing.

American Girl Doll’s official Facebook page has now been beset with negative comments. One person wrote: ‘You book is disgusting. It is child abuse.’

American Girl Doll and parent company, Mattel, have failed to respond to multiple requests for comment.

The book’s publication was first announced in February this year. Mattel did not promote the book on its official Instagram page

A press release that promoted the book read in part: ‘Every girl needs to learn to live comfortably in her own skin, and this book will show the way!’

As news spread about the contents of the book, American Girl Doll’s official Facebook page has been beset with negative comments

Another person wrote: ‘No longer a customer! American Girl is promoting this woke gender ideology!’

While another said: ‘Sounds like American Girl Doll company should focus less on trying to push the agenda of puberty blockers to 3-14 year olds!!!!’

One review on Amazon read: ‘A book that encourages children to take puberty blockers (known to cause infertility and increase risk of cancer) if they don’t feel right in their own skin. AND gives them resources to do so behind their parents back? Is not okay. These kids hear about It enough in this world, there’s no reason to put It in a children’s book.’

Another negative review read: ‘A doctor does not assign your sex at birth. That is created long before you exit the birth canal. And telling girls it’s okay to use puberty blockers and to give them resources if their parents don’t approve? SICK!! This book should teach girls to be happy in your own GIRL body and how to accept that and be proud to be a girl.’

There are currently overwhelmingly more negative reviews of the book on the American Girl’s website.

The only positive review, which reads: ‘I love how they included gender intersectionality and very diversity. Beautiful written,’ was published nine months before the book was released.

The book’s publication was first announced in February this year. Mattel did not promote the book on its official Instagram page.

A press release read: ‘Every girl needs to learn to live comfortably in her own skin, and this book will show the way!’

‘In these pages, a girl will find everything she needs to know about loving her unique self, staying confident through her body’s many changes, and appreciating her body for the life it lets her live,’ the statement continued.

It concluded: ‘Full of activities, tips, crafts, and real-girl stories, this book is a feel-good reminder that all bodies are worthy of love and respect.’

Also this year, American Girl was criticized in an article written by LGBTQ Nation for working with JK Rowling to produce a line of Harry Potter-themed dolls. The piece was headlined: ‘American Girl is all about equality. So why did it partner with JK Rowling?’

When reached for comment, a spokesperson for Rowling, who has become renowned for her skepticism of gender transition in young people, said: ‘We will not be commenting.’

While writing in the Christian Post, Anne Young wrote: ‘Contrary to what the first chapters appear to promote, the book starts teaching girls that they can destroy their girlhood.’

She added: ‘It causes girls to question the beauty of their bodies and even instructs them on how they can find help to change their bodies, including potentially mutilating their distinctly female anatomy.’

In another section of her column, Young pointed out that Mattel has previously been behind other woke concepts such as gender neutral Barbie dolls.

She writes: ‘To those of you who may think I’m crazy, American Girl is under the parent company Mattel, which has already put out transgender Barbies. One of them showed up recently in my friend’s daughter’s ‘Surprise Barbie’ package. Her horrified 8-year-old screamed, ‘What is this, Mom?’

The book’s writer, Mel Hammond, graduated from university in 2014, and lists on her website that some of her ‘favorite things are trees, rainbows, and dairy-free ice cream’

In 2021, Hammond authored a book under the American Girl Doll brand named Love the Earth. The book focused on climate change

The book, penned by resident American Girl author Mel Hammond, is currently available on shelves in bookstores across the country and on the company’s website.

Hammond, who lists her pronouns as ‘she/her’ on her LinkedIn profile, started working for the company in 2019, holding only one job at a small software company in her hometown of Madison.

In 2021, she authored a book under the American Girl Doll brand named Love the Earth. The book focused on climate change.

Hammond said about that book in an interview with American Girls Doll News: ‘I love educating people about the climate crisis, which is why this book was so much fun to write. I enjoy talking about climate change issues and sharing this book with neighbors, friends, and family.’

The writer – whose oeuvre consists of the book in question and two others penned over the past two year – earned her master’s degree in children’s literature at Kansas State, where she says she ‘studied misplaced and giant food in picture books.’

In her bio, she writes that she enjoys working at American Girl, which is also based in Wisconsin, citing how ‘last year for my birthday, my coworkers bought me a two-pound tub of rainbow marshmallows – which I named Marsh.’

A passage in the book – marketed to girls aged between three and 12 advises: ‘If you haven’t gone through puberty yet, the doctor might offer medicine to delay your body’s changes, giving you more time to think about your gender identity.’

It also provides a list of resources for organizations the children can turn to ‘if you don’t have an adult you trust’.

The release of the book comes amid a wave of increasingly woke content from the American Girl brand.

The book tells young readers that ‘if you don’t have an adult you trust, there are organizations across the country that can help you. Turn to the resources on page 95 for more information’

Parents have since expressed outrage over the book’s contents, with one mom saying that it is using the guise of being just another educational companion to tween girl to convey ‘ deceptive and dangerous’ messages that convince girls to question their bodies

Earlier this year, its parent company Mattel, recently put a transgender Barbie doll on the market. Before that, American Girl, which sells more than 30million dolls a year, shilled an Asian doll when anti-Asian hate crimes were skyrocketing across the US.

In the book, it normalizes being transgender, and pushes children to use puberty blockers.

It read: ‘Parts of your body may make you feel uncomfortable and you may want to change the way you look,’ one excerpt deemed problematic by parents online reads, before asserting ‘That’s totally OK!’

It goes on to advise children: ‘You can appreciate your body for everything it allows you to experience and still want to change certain things about it.’

On the very same page, the book promotes the use of puberty blockers, telling girls to seek them out from their doctor if they feel confused about their gender but are not physically ready to undergo hormone therapy.

The book then tells readers that ‘if you don’t have an adult you trust, there are organizations across the country that can help you. Turn to the resources on page 95 for more information.’

Parents have since expressed outrage over the book’s contents, with one mom saying that it is using the guise of being just another educational companion to tween girl to convey ‘deceptive and dangerous’ messages that convince girls to question their bodies.

She added that the company is ‘stripping away all innocence’ with the book’s content.