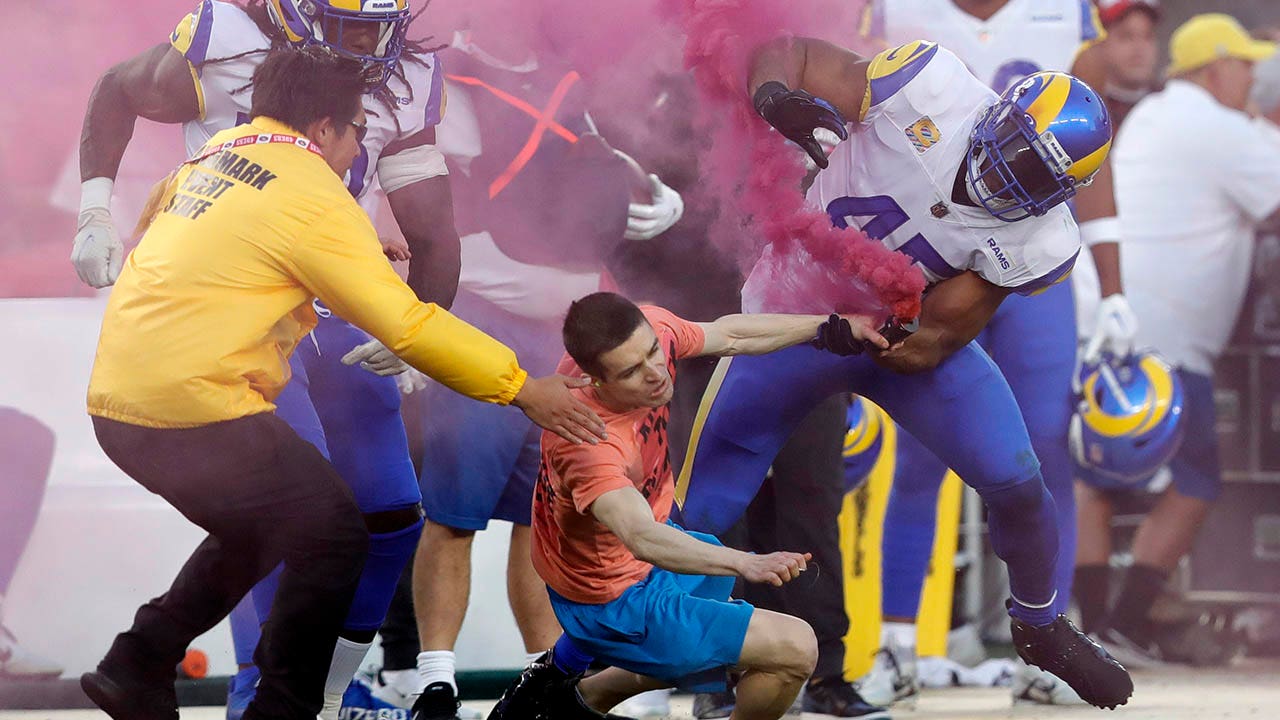 
Los Angeles Rams linebacker Bobby Wagner made an impact in the team’s game against the San Francisco 49ers in October, when he leveled a protester who ran into the field at Levi’s Stadium.

A fan with a smoke bomb is tackled on the field by Los Angeles Rams’ Bobby Wagner, #45, Takkarist McKinley, #50, and a security guard during their NFL game against the San Francisco 49ers at Levis Stadium in Santa Clara, California, on Monday, Oct. 3, 2022.
(Jane Tyska/Digital First Media/East Bay Times via Getty Images)

Alexander Taylor, an animal rights activist who was trying to draw attention to a specific case involving Direct Action Everywhere and a “rescue” of piglets from Circle Four Farms owned by Smithfield Foods, filed a police report claiming assault and that he suffered a concussion during the incident. Taylor was one of the protesters holding a pink smoke bomb when he rushed onto the field.

The Santa Clara Police Department said Taylor was cited for running onto the field at Levi’s Stadium.

A protester is hit by Los Angeles Rams defensive end Takkarist McKinley, #50, and linebacker Bobby Wagner during the first half of an NFL football game between the San Francisco 49ers and the Rams in Santa Clara, California, Monday, Oct. 3, 2022.
(AP Photo/Godofredo A. Vásquez)

Wagner spoke about the incident at practice two days after the game.

“Everybody kind of told me, but it is what it is. I don’t know, it’s behind me,” Wagner said at the time. “I ain’t really focused on it. I’m more concerned about the security guard that was hurt trying to chase him and the people that was … we don’t know what that is, and you just got to do what you got to do.”

Wagner did not receive any discipline from the league over the hit.

Bobby Wagner, #45 of the Los Angeles Rams, looks on during training camp at University of California Irvine on July 29, 2022 in Irvine, California.
(Scott Taetsch/Getty Images)

The 32-year-old linebacker is about to wrap up his first season with the Rams. He has 97 tackles and five sacks this season.