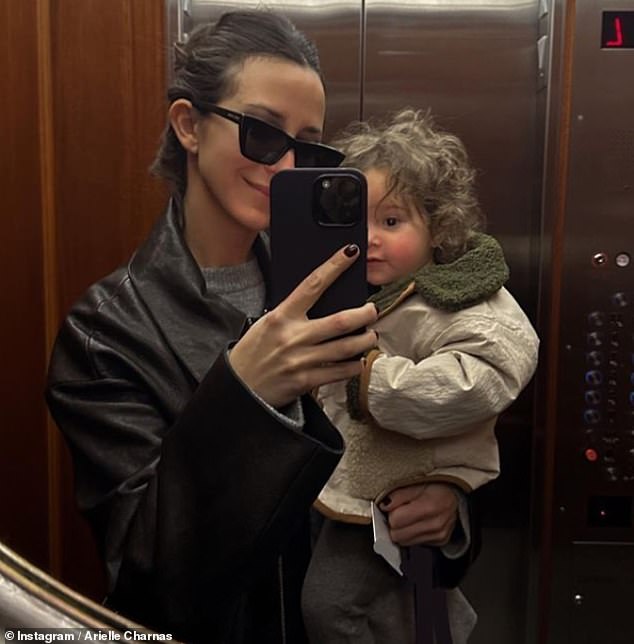 By Alex Oliveira For Dailymail.Com

The CEO of Something Navy denied rumors that the husband of the fashion line’s founder has been embezzling from the company.

Matthew Scanlan said the rumors about Arielle Charnas’ husband Brandon Charnas were ‘categorically false,’ and added that he doesn’t work for the company, let alone have access to its funds.

The embezzlement rumors began to swirl on social media this week, and piled on top of previously swirling speculation that the couple were in the midst of a divorce.

Arielle, 35, recently posted a series of photos on her Instagram that showed her without her wedding band, leading to rumblings that she and Brandon – the 37-year-old founder of – were separating.

The divorce rumors were fanned by a letter posted online which was purportedly written by Arielle and discussed her marriage and husband.

A representative for Arielle told Page Six that those rumors were false and that the letter was fake, insisting that the couple were still married and happily in love.

Arielle Charnas, 35, appears in a photo from a week ago without her wedding band

Arielle Charnas appear together in a photo from last year. Rumors are swirling that they are separating

Scanlon denied the embezzlement rumors in a statement to WWD on Wednesday.

‘Brandon Charnas does not have access to company bank accounts. He is not an employee of the company, and he has no access points.’

Current Real estate also chimed in, and said there had never been any embezzlement at the company.

Arielle started out as a fashion influencer on Instagram, eventually growing her signature styles into a successful brand. Brandon is the founder of Current Real Estate

Matthew Scanlan, the CEO of Something Navy denied rumors that the husband of the fashion line’s founder has been embezzling from the company.

Arielle’s rep denied the veracity of all the rumors circulating around fashionable couple.

‘This letter is fake. All of these rumors are fake. Arielle and Brandon are happily married, there was absolutely no embezzlement,’ the rep told Page Six.

They said the rumors were merely a ‘smear campaign.’

‘This is all part of a disgusting, coordinated smear campaign attempting to damage Arielle and Brandon’s reputations and lives.’

Arielle and Brandon Charnas at their wedding in 2014. The couple have three kids together

The couple were married in 2014 and have since had three daughters together, Navy Bea, Esme Rae, and Ruby Lou.

The current situation is not their first foray into scandal. In the beginning of the pandemic Arielle used her connections to procure a COVID-19 test, despite not seeming to meet the requirements that were then required to receive one.

After testing positive she fled New York City – flouting lockdown recommendations – so she could isolate in the Hamptons.

Met with much chagrin from social media users, Arielle gave a tearful apology.

‘My family and I are truly sorry to those we have offended for not appearing to [take] this crisis gravely seriously’ she said in a video on Instagram. ‘We’re not bad people.’

Charnas started out as a fashion influencer on Instagram, eventually growing her signature styles into a successful brand.