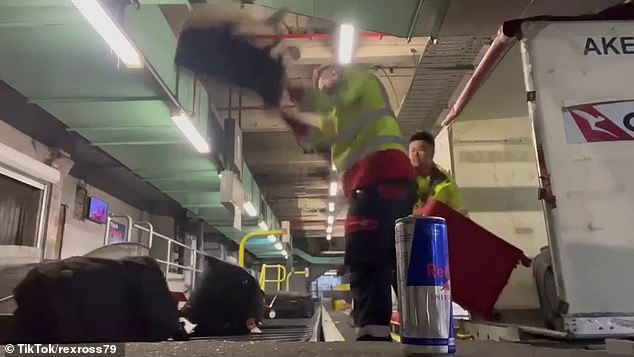 Two baggage handlers who were filmed carelessly tossing passengers’ luggage onto a conveyor belt have been sacked.

Footage taken at Melbourne Airport shows the Swissport Australia workers, who had been contracted by Qantas, laughing as they slammed down suitcases and lazily threw them around.

Swissport has since confirmed the two staff members have been fired.

‘An urgent investigation was undertaken into the recent behaviour of two team members at Melbourne Airport who were handling customer luggage in an unacceptable manner,’ a spokesperson said in a statement to Daily Mail Australia.

‘As a result of that investigation, these individuals are no longer employed by Swissport.’

Qantas had earlier said the behaviour was ‘not acceptable’, with a third worker also being stood down after the footage surfaced. It is unclear what happened to that employee.

In the footage, one handler is seen hoisting a bag high above his head before slamming it down so hard that it bounces – much to the amusement of his co-worker.

The same handler then tosses a small suitcase several metres into the air and onto the belt, as if shooting a basketball.

At least two bags were thrown off the conveyor belt, disappearing out of view, without any worker appearing to care.

The footage was uploaded to TikTok on Friday with many horrified at the lack of care for travellers’ luggage.

One TikTokker asked ‘is this like a competition who can destroy luggage the fastest?’, while another declared the workers ‘should be terminated on the spot’.

One TikTokker asked ‘is this like a competition who can destroy luggage the fastest?’, while another declared the workers ‘should be terminated on the spot’

‘You’ve got to be kidding me! Bet they would kick a stink if someone treated their stuff this way,’ another said.

‘It would actually take more effort to lift it and throw it with force, rather than just put in on the conveyor. If they don’t like it, find another job,’ one wrote.

‘When are they going to get fired?’ commented another.

‘So wrong on so many levels, these men need to be held accountable.’

Another said cameras should be permanently installed to film the actions of baggage handlers.

An internal Swissport memo was also provided to Daily Mail Australia, in which the company’s CEO Brad Moore said: ‘The behaviours in the video let all of us down’.

‘Disrespectful behaviour to our customer luggage and personal effects will not be tolerated and will result in serious disciplinary action.’

He added that the behaviour depicted in the video was confined to ‘a small group of individuals’.

‘The unacceptable behaviour of a few individuals will not go unchecked nor be allowed to tarnish the quality work of our whole team,’ he said.

Gov. J.B. Pritzker’s COVID-19 disaster declaration to end May 11, more than three years after it was first issued