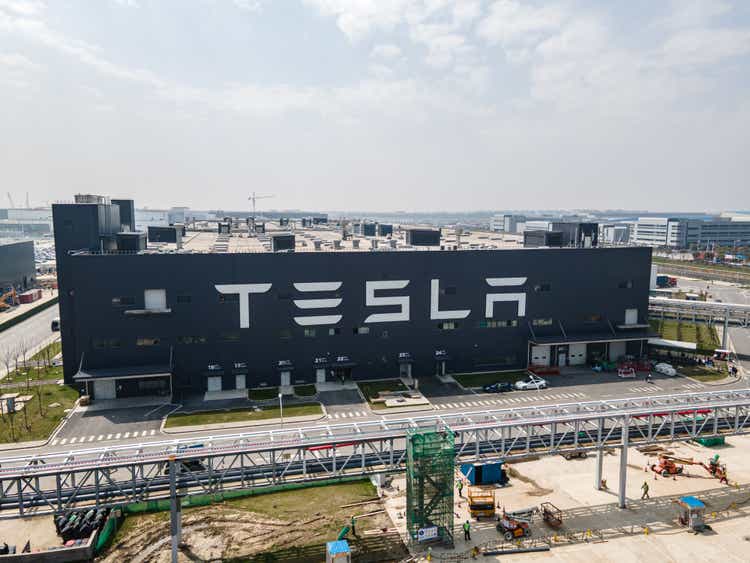 
Recently, I wrote a cautious article on Tesla, Inc. (NASDAQ:TSLA), suggesting that even though the first delivery of the Tesla Semi to PepsiCo was a major milestone for the company, it is unlikely to move the needle for the company in the near term.

On December 5th, 2022, we got separate news reports from Bloomberg and Reuters suggesting Tesla is voluntarily cutting production at its Shanghai Gigafactory by 20%, citing anonymous sources. If true, this will be the first time Tesla Shanghai has voluntarily reduced production, as the prior two production cuts were mandated by government lockdowns.

Should Tesla bulls be worried about this development, and how does this affect Tesla’s revenue forecasts?

Shanghai Gigafactory Represents Over 40% of Production

First, let us review Tesla’s global production base to see how Tesla Shanghai fits into the company’s growth plans. After a recent 9 month expansion plan, Tesla’s Shanghai Gigafactory’s output capacity was doubled to 1 million vehicles per year and is Tesla’s largest production facility. According to company reports and industry followers, Shanghai represents 40-50% of the company’s production capacity (Figure 1).

The Shanghai Gigafactory mainly produces the Model 3 and Model Y for the Chinese market, as well as for export. According to CnEVPost, the first half of each month’s production is exported, while the latter half is delivered locally into China. Tesla Shanghai sold over 100,000 vehicles in November, a 40% increase from the 71,000 vehicles sold in October. Of the 71,000 vehicles sold in October, 17,000 were delivered locally and the rest (~54,000) were exported.

Clearly, the Shanghai Gigafactory represents a large part of Tesla’s current production capacity, as well as a validation of the company’s ambitious growth trajectory.

Before investors panic, there are a number of reasons why Tesla may be cutting production in Shanghai at this time.

First, if we look at the month-to-month figures, we can see November’s 100,000 vehicles sold was 40% above October’s 71,000 output, and is likely in excess of the factory’s output capacity (Figure 2).

A 20% reduction from November levels implies production of ~80,000 vehicles, or a 960k annual run-rate, which is much closer to the factory’s 1 million capacity. The rise and fall of monthly production could simply be the normal ebb and flow of how Tesla manages its production levels (note, supply chain experts would say such large swings in monthly production reflects poor management as it causes unnecessary strains in the supply chain, but that is a different conversation) and not a cause for concern.

Second, as I understand it, Tesla Shanghai was offering a lot of incentives for Chinese consumers to get them to place orders before year-end so they can qualify for the Chinese government’s EV subsidy that was set to expire at the end of December. Production was likely ramped up ahead of this incentive program, and the rumored production cut is probably just normalization of production levels.

Finally, a third reason why production is being cut could be because demand for Tesla’s vehicles is indeed soft, and investors should be worried if this is the reason.

For example, high-end electric vehicle (“EV”) sales could be suffering from macroeconomic uncertainty, as consumers pull back on spending with many economists and market pundits predicting a global recession is imminent in 2023. Alternatively, sales of Tesla’s vehicles could be slowing as consumers develop a negative perception of Elon Musk / Tesla.

Tesla Is Becoming A Polarizing Brand

Unfortunately, there are indications that Elon Musk’s personal actions are becoming a distraction to Tesla’s business. According to a recent WSJ article, Tesla’s brand image among Democrats has taken a steep dive as Mr. Musk wades into controversial debates in order to revive his flagging Twitter business. For example, Mr. Musk urged his twitter followers to vote Republican in the midterm elections, he unbanned former President Trump’s twitter account, and he reinstated many banned twitter accounts in the name of “free speech.”

Tesla’s net favorability among self-described Democrats in the U.S. fell to an average of 10.4%, down from an average of 24.8% in October according to the WSJ article.

Although the brand’s net favorability rose among Republicans from 20.0% to 26.5%, the result is likely a net loss for Tesla, as Democrats are much more likely to purchase an electric vehicle (Figure 3).

Issues Likely Overblown In The Near Term…

Tesla’s rumored production cuts in December is likely an overblown story. I personally lean towards reason number 2, i.e., Tesla increased November production and sales incentives in order to beat the December subsidy deadline. It also helps that December is Tesla’s fiscal year end, so any sales Tesla can book before December 31st will help their Fiscal 2022 financials.

Consensus estimates for Q4/2022 are calling for $26.3 billion in revenues, a 48.4% YoY increase, and $1.28 in EPS, a 50.9% YoY increase. Given Tesla’s status as the premier growth stock, I believe the revenue figure is more important to Tesla’s stock performance (Figure 3).

…But The Long-Term Growth Trajectory May Be too Optimistic

However, if Mr. Musk continues to be a polarizing figure, then Tesla’s long-term growth estimates may need to be adjusted lower. For example, by 2030, analysts expect Tesla to generate $387 billion in revenues, or a 21% growth CAGR from 2022 estimates of $83.4 billion (Figure 4).

Unfortunately, if half of potential American customers (Democrats vs. Republicans) are alienated by Mr. Musk’s activities outside of Tesla, then it is hard to see how the company can achieve those ambitious growth figures.

This is especially true as increasingly more electric vehicle models are released by other auto manufacturers like Audi, Hyundai and Ford. It is notable that in a US News article titled “Best Electric Vehicles of 2022 and 2023,” Tesla’s vehicles do not rank in the top 3 in any category.

Risk To My Call

The most obvious downside risk to my call is that the December production cuts at the Shanghai Gigafactory is indeed a sign of a dramatic reduction in demand for Tesla vehicles. This could lead to the company “missing” on Q4/2022 estimates and TSLA stock reacting poorly.

On the upside, there are products in development at Tesla, like the recent Tesla Semi truck or the long-delayed robotaxi, that could supplement revenues, allowing the company to achieve its ambitious long-term revenue targets.

Recently, there were news articles discussing production cuts at Tesla’s Shanghai Gigafactory. I believe the articles are sensationalist journalism, as Shanghai’s November production and sales were likely boosted to beat the expiry of government subsidies, meaning the December cuts just represent normalization. More worrisome for Tesla bulls are Elon Musk’s outside business activities that are casting the Tesla brand in a bad light. As Tesla increasingly becomes a polarizing brand, it is hard to see how the company can achieve its ambitious long term revenue targets.