A Mighty Quinn for Macs: Freshman guard Quinn Arundel pushes Mother McAuley past Marist in OT. ‘This was really exciting.’ 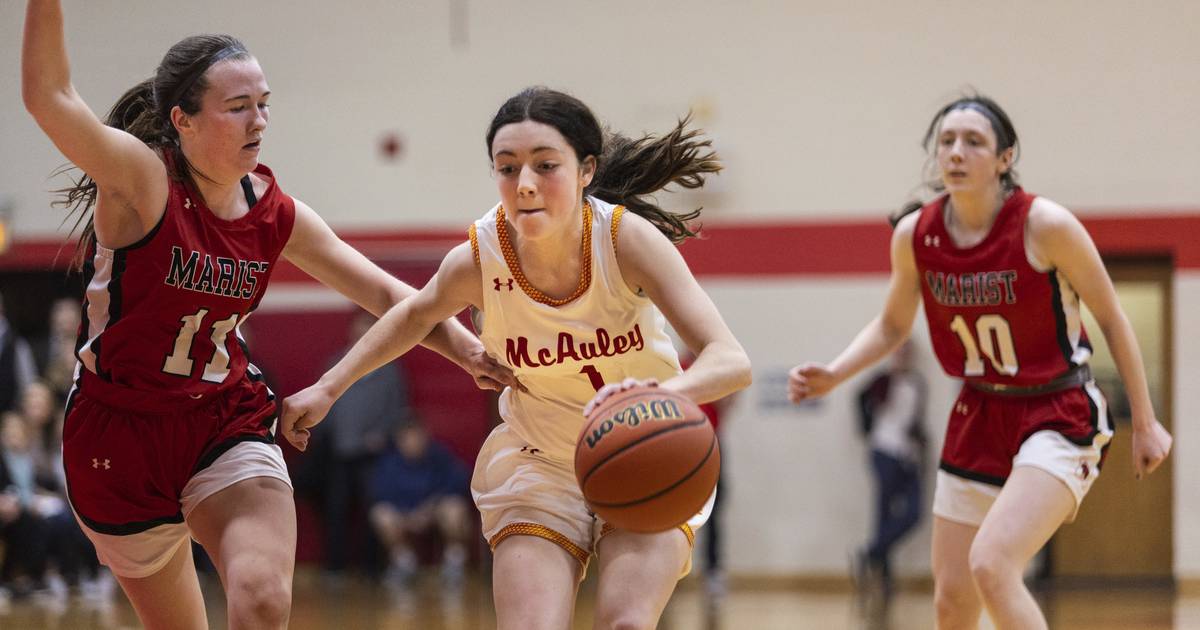 
When freshman Quinn Arundel was installed as Mother McAuley’s point guard for the start of the season, it was not a big surprise.

“I went to a couple of her grammar school games,” Feil said. “She was shooting from half court. I was like, ‘Geez, this girl is going to be a star. I know it.’ Yeah, she’s really good.”

Arundel was one of several stars to shine Thursday night as the host Mighty Macs pulled out a 56-53 victory in overtime against rival Marist in Chicago.

Arundel’s first competitive experience in the McAuley-Marist rivalry was a wild one.

It started in the locker room.

“Yeah, before we went out, I was a little nervous and excited,” Arundel said. “I’m nervous before every game, but I was especially nervous for this one. I really wanted to beat them and show McAuley was better than Marist.”

Arundel came out firing. She missed her first 3-pointer, but her first basket was a running bank-in at the start of the second quarter. She finished the first half with three points and sat for a short time.

“I think coach (Curtis Lewis) was trying to make me less nervous with the crowd and everyone yelling,” Arundel said.

The second half was a different story. Arundel hit a pair of 3-pointers and scored eight points in the third quarter.

In overtime, she swished another three to put McAuley ahead 48-45. After Marist tied it on a 3-pointer by Isabelle Harmon, Arundel had the assist on a three by Egan that put the Mighty Macs up for good.

It was McAuley’s first win over Marist since the 2018-19 season — when Arundel was in fifth grade.

“We feel really good that we finally beat them after a long time,” Arundel said. “This was really exciting.”

Arundel’s St. Alexander grammar school career was an eye-opener. From sixth through eighth grade, her teams were undefeated.

As an eighth grader, her team won the prestigious “Gold Ball” in the Southside Catholic Conference Tournament held at McAuley.

Her high school choice came down to McAuley or Marist.

“I shadowed at both Marist and McAuley,” Arundel said. “When it was time for the entrance exam, I didn’t know which one I was going to choose.

“Once I shadowed at McAuley and watched their basketball games, I wanted to come here because I liked the fan section and how nice the girls were.”

Lewis, starting his first season at McAuley, couldn’t have been happier. Having coached her in AAU ball, he knew what he was getting.

“Quinn was not your typical freshman,” Lewis said. “She has always been a quick player, a heady player, and she can shoot the ball.

“It was just a matter of her adjusting to the physicality of high school basketball. She’s capable of playing in these moments and hitting the big shot.”

Or ripping a rebound from a bigger player. Guarding her is a chore.

During one overtime sequence against Marist, Arundel was trying to get to an open space in the frontcourt when she and Marist defender got tangled up.

The RedHawks’ player wound up on the floor. Arundel finished the play.

“She’s not afraid to do anything,” Feil said. “She’s very physical, and we love that about her. She’s a really good 3-point shooter. Even if she misses, she keeps shooting and shooting until she makes it.

“That’s what is really good about her.”