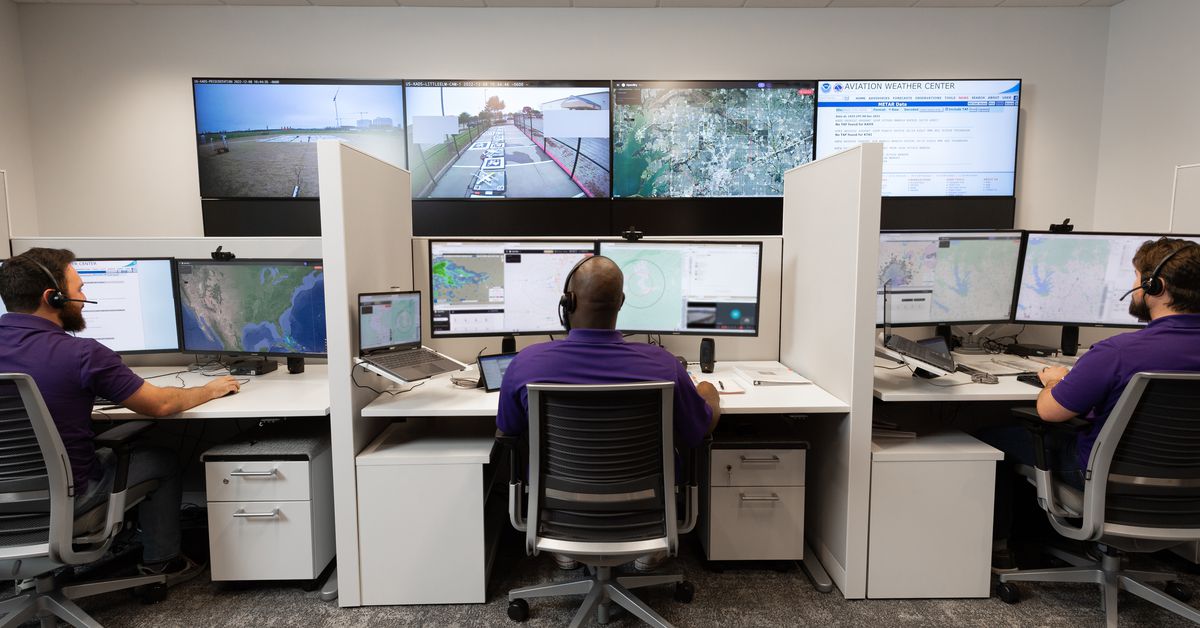 Wing, the delivery-by-drone company under Alphabet’s umbrella, is revealing its new remote operations center where pilots can monitor multiple missions at a time. Its latest facility is stationed in the Dallas-Fort Worth metro area, the same place it’s been operating local deliveries for companies like Walgreens.

The Texas location makes it so operators can easily manage drone flights in different time zones, specifically ones in both Virginia (the company’s first delivery location) and nearby Little Elm, Texas. Wing also has another center in California, and plans to build out more. The Verge connected with Wing spokesperson Jacob Demmit and drone pilot Tom Hillier on a video call for a demonstration.

Operators like Hillier use multiple screens, with some displaying live feeds of “nests” — which is where Wing drones are parked on charging pads and awaiting a payload. Screens above the pilot desks show live video from multiple places including Texas, Virginia, and even Australia. Having these nests on site, like in the Little Elm Walgreens parking lot, “allows partners to do their own order fulfillment,” Demmit said.

From that Walgreens, the drones have an authorized delivery range of 4.5 miles (though it’s technically capable of about six miles). The radius includes about 50,000 homes that are eligible to order using the Wing app. Those residents can’t yet order prescriptions though, just over-the-counter and out-on-the-floor items.

Once an order comes in, trained employees at the Walgreens attach orders to the drone and it automatically calculates its route and autonomously takes off and delivers the package. Hillier then shows us Wing’s OpenSky software that helps monitor flights. Pilots keep an eye out for bad weather so they can cancel deliveries that could be affected. There’s no joystick for pilots to manually fly the drones remotely.

Essentially, remote monitoring Wing drones is like watching a Google Maps overview with GPS location dots on the screen plus some telemetry data like speed and height. Although the drones have built-in black and white cameras for self-navigation, pilots like Hillier can’t see a live feed from them. Also if there are any issues before, during, or after the mission, the pilots contact ground support who can go do things like nudge a drone that didn’t start charging.

Demmit says the drones wirelessly charge on the pads, run self-diagnostics from there, and send the info back to the remote operations center. On a full charge, they’re capable of flying a 12-mile round trip, and that’s with its max payload of about three pounds. Wing is working on building larger drones with higher capacity.

One drone recharge takes “several minutes” after a short trip, according to Demmit. He emphasized that there are about 20 of the flyers in rotation at any given time, and believes that it’s unlikely that any of them get to a low battery. The Texas operations run five days a week from 9:30AM to 4:30PM.

Wing has seen most of its success in Australia, which is now doing 1,000 deliveries a day, with coffee being the number one item of transport there. In the US, the company is the first to get “Part 135” air carrier certification, which allows for beyond-line-of-sight operation and makes it ok to fly over people. It’s also operating in Finland near Helsinki and, soon, Ireland near Dublin. The company has surpassed 300,000 deliveries, according it its website. It’s a good head start for a relatively small-scale operation as other companies like Amazon work to catch up.

Google on the ropes in India