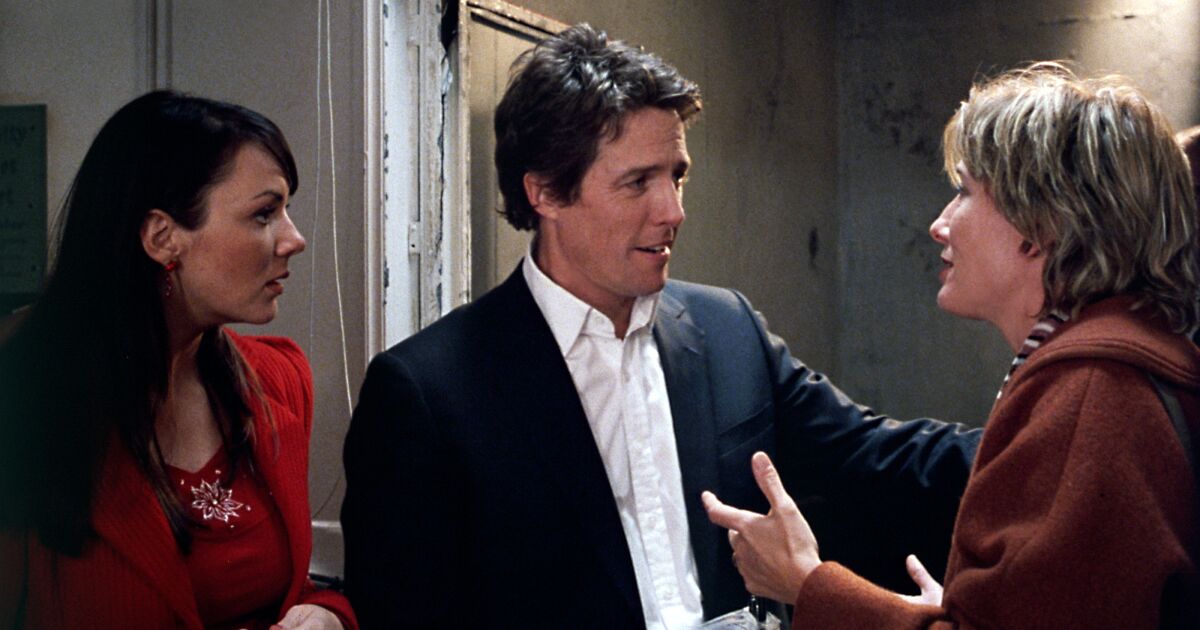 One for the holidays

As a Richard Curtis fan, I almost didn’t read Mary McNamara’s column about “Love Actually” [“‘Actually’ a Classic,” Dec. 1] because I am so weary of hearing it’s not a rom-com or a Christmas movie because (fill in the blank).

It’s not a perfect film, the cast isn’t diverse, and some people don’t like the sexual content, but it is funny and, most of the time, heartwarming.

The end of the movie with the Beach Boys’ “God Only Knows” playing over countless real Heathrow reunions never fails to make me cry.

My daughter, the world’s biggest Emma Thompson fan, hates that Alan Rickman breaks her heart, but hey, it’s only once a year.

Thanks to McNamara for standing up for our yearly “Love Actually” tradition.

McNamara says that an excavated flaw in repeated viewings of “It’s a Wonderful Life” shows that George is “giving up his dreams” by marrying Mary. But remember, they were on their way to a worldwide honeymoon together when the run on the bank stopped them.

It remains the best movie ever made, and now McNamara can love it without reservation.

I was impressed with your Calendar front page layout, picture and McNamara’s column.

Being a fan of the movie, I search for it each year.

I know that McNamara’s list of Christmas movie classics wasn’t exhaustive, but there is one other new classic that I also find myself looking for each year. The animated feature “Polar Express,” for its story, stunning visual effects and voice acting, especially Tom Hanks, captivates me to the point that each December I look forward to seeing and never tiring of these two movies.

As a longtime Fleetwood Mac fan, I wanted to acknowledge Erin Osmon’s appreciation of Christine McVie [“Sunshine Between the Thunderheads,” Dec. 2].

Osmon captured the essence of McVie’s spirit and soul. She painted a picture in her writing that will stay with me forever as I listen to the music of the band.

Thanks for the humor in Matt Cooper’s “TV This Week” [Dec. 4], with a hunky businessman, hunky bodyguard, hunky graphic designer, hunky school teacher and hunky chef.

My best laugh of the day.

To Mark Swed’s classical stars of 2022 [“Classical Stars Shine Bright,” Dec. 4], I would add what for me was the superstar performance of the year, the world premiere of Gabriella Smith’s “Breathing Forests” at Walt Disney Concert Hall in early February.

I’ve often wondered what it would have been like to be at the premiere of Stravinsky’s “Rite of Spring,” and its ensuing riot, or to hear a new symphony by composers such as Beethoven or Mahler in their prime.

This work, and this composer, are on such a level.

The fluidity of the orchestration, the precocious mastery of the sonic range of each instrument, and even exploring the extremes and mapping new territory,the greatest gift of “Breathing Forests” is in its emotional undercurrents, with motifs which propel and organically invent, and with a climax within which, anchored by James Mcvinnie’s organ, was easily the loudest full-frequency wall of sound ever uttered within Disney Concert Hall.

To my ears, it was the sound of a full-scale climate alarm, a call to emergency from the breathing forests and trees of the world who, unable to speak, are heard through the music of this young composer.

It is asked if a tree falls in the middle of a forest, and no one hears it, if it still makes a sound? What if a major classical work premieres in the midst of a global pandemic and climate emergency?

Perhaps the riot has only just begun.