Chicago Bulls emphasize patience for rookie Dalen Terry’s inclusion in rotation: ‘The game just has to slow down for him’ 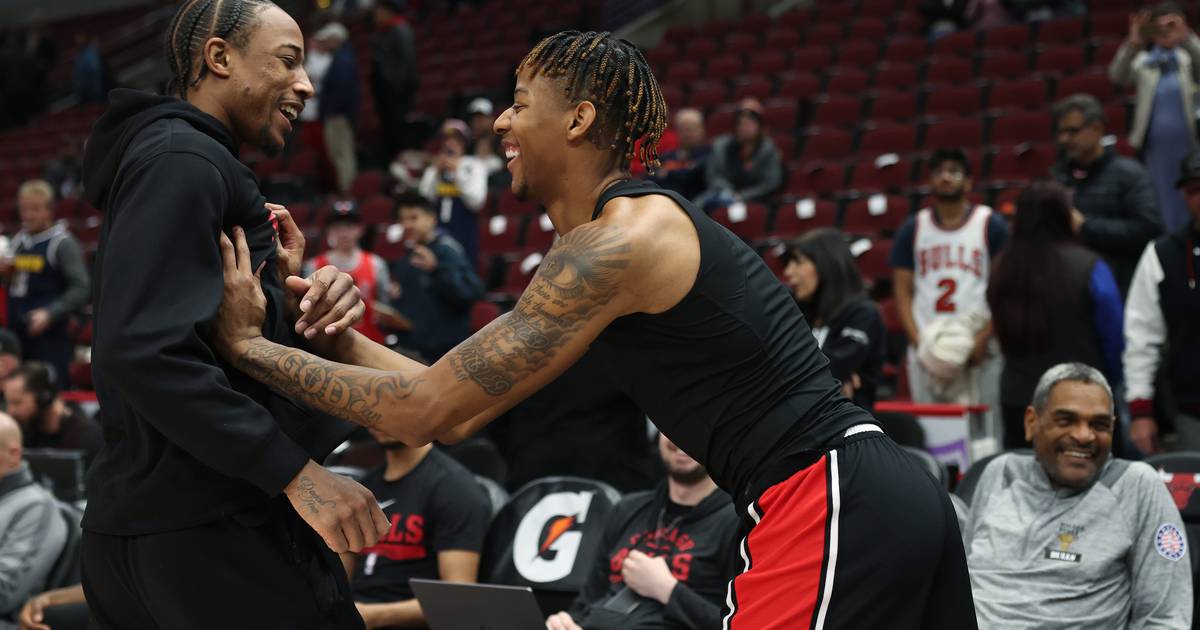 
It’s impossible to miss Dalen Terry on the sidelines of a Chicago Bulls game.

On the bench, with his hoodie zipped to his chin and pulled over his head, Terry often resembles an over-energetic little brother at an AAU game. He leaps on top of teammates, wobbles his knees through dance choreographies and, at one point, pretended to stomp on miniature versions of the opponent.

But while Terry has been the star performer of the Bulls bench, the rookie is barely cracking the lineup, averaging only 3.3 minutes of mop-up time through the first quarter of his debut NBA season.

As Terry heads back to the Windy City Bulls for another G-League stint, it’s unclear when the Bulls will take a chance on bringing their first-round draft pick into the rotation. While coach Billy Donovan emphasized his belief in the rookie’s future, he feels Terry still isn’t ready for meaningful minutes.

“If you throw him in the rotation, you’ve got to sit somebody else,” Donovan said. “Right now, I don’t think he’s at the level of some of our guys. … I love his competitiveness, but there’s also things he’s going to continue to grow at and get better at that are not quite there yet.”

Even in practice, Donovan describes Terry’s presence on the court as a “constant rush.” The Bulls drafted Terry for his frenetic pace on the court, creating chaos as a pickpocket defender and elite passer for the Arizona Wildcats through two NCAA seasons.

That frantic energy was visible from Terry’s first seconds on an NBA court: a third-quarter substitution in the first preseason game against the New Orleans Pelicans. Terry immediately sized up Pelicans guard Devonte Graham, hands twitching and feet skittering as he battled to stay in front of the veteran ball handler.

That brief defensive series showcased Terry’s promise as a one-on-one defender. It also ended in a foul as Terry – overeager perhaps to a fault – bumped Graham on his way to the basket.

Donovan said this is the challenge for Terry in a nutshell: while the rookie shows flashes of skill, he’s still making too many mistakes to reliably factor into the Bulls rotation.

“The game just has to slow down,” Donovan said. “He’s got a really, really good energy and he’s got a good motor but things have got to slow down for him a little bit in terms of reading screens and making decisions. He innately is a very, very good passer, but even in practice you can tell there’s things defensively where he just doesn’t have enough under his belt.”

For a defense-first player like Terry, mistakes are part of the learning process. Becoming an elite NBA defender means learning how to gamble – how to time a jump into the passing lane, when to swipe down at a slightly errant dribble, which players need to be followed through every single screen.

While Donovan encourages this trial-and-error as a vital portion of Terry’s learning process, he also feels the Bulls can’t afford the risk of relying on his inexperience.

“He’s really, really reliable in a lot of situations and listen – young guys are going to make mistakes,” Donovan said. “I get that. That’s part of the game. So I’m not trying to be overly critical that he’s making mistakes or he shouldn’t do that. But at the same point for him, I think that the speed and pace of the game for him mentally needs to slow down.”

While he could offer a boost to the defensive energy, Terry isn’t a solution to one of the Bulls’ most pressing issues – 3-point shooting. Terry averaged only 1.9 attempts from behind the arc in college. After he was drafted, he acknowledged the work necessary to bring his shot up to an NBA level. Even at the G-League level, Terry shot 18.2% from 3-point range during his five games with Windy City.

Terry will never be the sharpshooter the Bulls need, but once he’s ready for the big leagues, he’ll provide plenty in the way of defense, ball movement and high-motor energy. (The fact that this is the MO for too many players on the Bulls roster is a separate issue for a separate article.)

The rest of Terry’s rookie season will be a balancing act for the Bulls, who hope to keep feeding Terry minutes in the G-League while keeping him with the first team for games and travel. And although it hasn’t come yet, Donovan emphasized that the Bulls are eager to bring Terry in at the right moment.

“I don’t think it’s any question – I believe he can get there,” Donovan said.