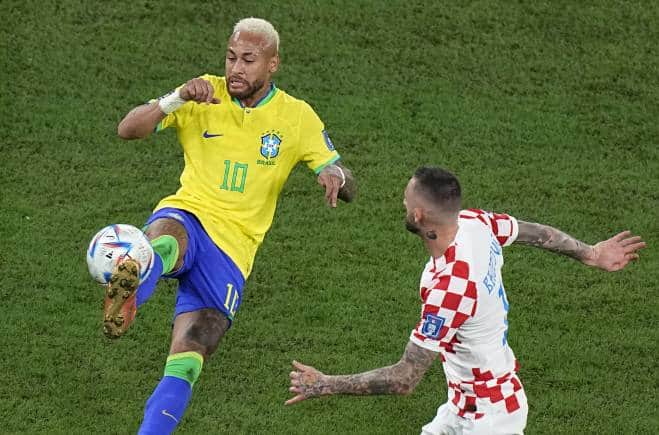 
Croatia won their second game on the trot on penalties to advance to the semifinals. It was heartbreak for Brazil and Neymar, who will have to wait another four years to turn their fortunes around.

After conquering Japan, Croatia pulled off yet another shock as they beat Brazil to send the tournament favorites crashing out of the World Cup. It seemed that night when Brazil’s golden boy Neymar would see them home, when he hit the roof of the net in the 106th minute. But the Gods were cruel once again as Petkovic equalised ten minutes later following a deflection off Marquinhos. Once the game went into penalties, the odds were stacked against Brazil, and they crumbled, just like Spain. Livakovic was up to the task, but Brazil slipped with Marquinhos sending the decisive penalty into the post. The ball ricocheted off and with it Brazil’s dream of getting their hands on the World Cup.

Neymar’s goal moved him into a tie with Pelé as Brazil’s all-time leading scorer with 77 goals. But he wasn’t among those who took the penalty for Brazil. A decision that stifled many. In a game where the pressure was at its peak, it was young Rodrygo who was sent to take the first kick for Brazil. The kick was a weak one, but Livakovic had jumped the right way.

Nikola Vlasic, Lovro Majer, Mislav Orsic and Modric converted their penalties for Croatia, while Casemiro and Pedro scored for Brazil. Five of Croatia’s last six matches at World Cups have gone to extra time, including in its penalty shootout win over Japan in the round of 16 in Qatar. They had been successful in eight of their last 10 knockout matches at the tournament.

Brazil was trying to return to the semifinals for the first time since 2014. The team hadn’t made it to the last four since hosting the tournament eight years ago, when the Selecao was embarrassed by Germany 7-1.

Croatia will next face either Argentina or the Netherlands to try to return to the World Cup final four years after losing the title to France. Brazil was trying to defeat a European opponent in the knockout stage of the World Cup for the first time since the 2002 final against Germany, when the team won for the last time.