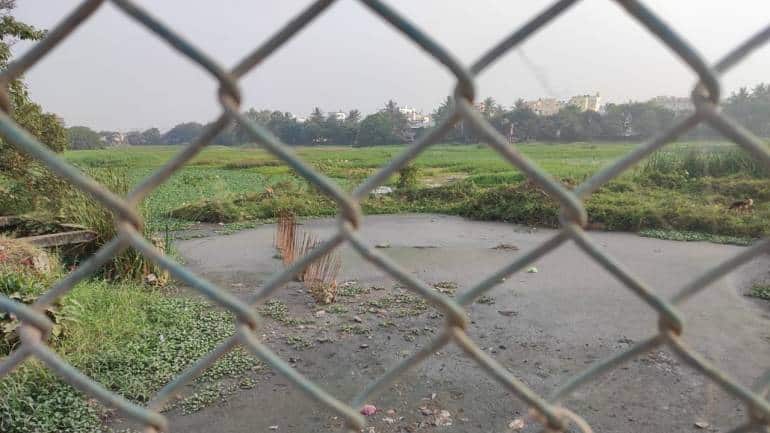 “About 20 years back, in my childhood, we used to come here, to KR Puram lake, for boating and swimming,” says social activist Jagan Kumar.

A short distance away, two algae-covered paddle boats lie chained to a rock, gently rocking in the filthy waters of the KR Puram lake. Almost a year after the National Green Tribunal ordered Karnataka to remove encroachments and revive the lake, its waters remain murky.

Kumar had filed a petition before the National Green Tribunal (NGT) last year seeking a revival of the lake.

The NGT has passed an order asking the Karnataka State Pollution Control Board (KSPCB) and the Bangalore Water Supply and Sewerage Board (BWSSB) to submit a report by December 16 on the work done to prevent sewage leaking into the lake and also on the removal of encroachments.

“The KSPCB has also given nine recommendations for ensuring the survival of the KR Puram Lake. Whether they have been complied with or not (or) action if any action (has been) taken in that regard is also not known,” the order said. If reports from the KSPCB as well as the BWSSB are not filed within two weeks, serious strictures will be passed against their officials, the order added.

Kumar filed the NGT petition in October 2021, seeking a complete revival of the lake. The following month, KSPCB told the NGT bench, “During the inspection, it was informed (sic) that the development in the buffer zone has taken place over 30-40 years. The assistant director of land records (ADLR) and BBMP (lakes) is to ascertain the extent of the lake and remove clear all encroachments, (and) provide fencing to the lake.”

The KSPCB has also issued notice to the departments concerned on the control of sewage entering the lake and solid waste being dumped in the lake buffer.

Government-developed Dishank survey map in real-time shows how much encroachment KR Puram Lake has undergone. The live pin location that was supposed to be water is now dry land.

In February, the NGT ordered several short-term measures, including fencing of the lake, removal of encroachments on the lake bed and stoppage of construction and dumping of demolition waste. “There is a responsibility on the state government to look into these issues seriously and take steps to remove the encroachments from the water body and restore the same to its original position. If it (sic) was done by the government departments, they are expected to relocate the same to a suitable place,” the order added.

In another case, involving Yele Mallappa Shetty Lake, which is not far from KR Puram lake, an NGT order dated May 2022, reads, “The Revenue Department is directed to take appropriate steps to survey to identify (sic) the unauthorized encroachments into the water body and initiate proceedings as per rules in force against them to remove the encroachment and restore the water body within six months.”

And last week, on December 2, the NGT dismissed a plea by the Karnataka government seeking a modification of the Tribunal’s order directing the State to immediately deposit Rs 500 crore as environmental compensation for failing to protect the Chandapura lake in Bengaluru and for violation of the buffer zone at the lake.

One of the abandoned boats in KR Puram Lake

“Nothing has been done for KR Puram lake till now. Neither the sewage inflow nor the construction activities have been stopped,” laments Kumar.

In July, Kumar filed an affidavit asking the NGT to pass an interim order to stay further development or construction in the buffer zone, which would lead to the lake shrinking further. “The matter will be heard on December 16,” said Kumar.

In the case of Yele Mallappa Shetty Lake, the state departments did not comply with the NGT order, said Kumar. On November 30, he filed another petition to initiate Sections 25, 26 and 28 of the NGT Act, which allows the tribunal to impose a penalty and imprisonment up to three years if a party fails to comply with its orders. “On December 8, my application got admitted and the NGT instructed all respondents to file their individual reports,” Kumar added.

BBMP (lake) officials told Moneycontrol that work on both lakes is on in full swing. “About Rs 8 crore has already been allocated for KR Puram lake. Even today, survey work is ongoing and we are working on a diversion pipeline for sewage and desilting the lake. We have sent a letter to the zonal commissioner regarding the illegal encroachments on the buffer zone and we are awaiting a reply,” said Ravi KV, executive engineer, BBMP (lakes).

The KSPCB could not be reached for comments.

Buildings hovering right on top of the lake boundary

Environmentalists say retaining a healthy network of lakes in the city and removal of all encroachments, especially in lake beds and stormwater drains, are critical if flooding has to be prevented in Bengaluru.

Ashish Vashishta, an NGT lawyer, said every city has master plans to allocate usage of lands, including water bodies. “Despite this, we continue to see encroachments,” he rued.

“Revenue maps are one of the oldest demarcations of water bodies. One solution can be to constantly update the maps to highlight the current encroachment with regards to the original boundaries. This will help us to visualise the damage we are doing,” he added.

Sandeep Anirudhan, Convenor, Coalition for Water Security / Citizens Agenda for Bengaluru, said lakes are mandated to be protected under The Wetland Rules (first issued in 2010 and reissued in 2017), under the Environment Protection Act .

“However, what is taking the government so long to implement it? The Karnataka High Court issued two separate orders last year, asking the government to clear encroachments on lakes, and Lake Buffer Zones, respectively. However, no action has been taken by the state or BBMP,” Anirudhan said. Courts also do not punish officials, so the latter are not afraid of violating laws, he added.

In several cases across India, the NGT has ordered criminal liabilities and registration of FIRs, said Vashishta. However, it needs to be ascertained if the orders have been complied with, he added. “In some cases, for example, the Yamuna river, the compliance is low. Water security is vital for the survival of a sizeable population. I think the NGT can call for quarterly reports and create a special monitoring mechanism on the compliance with its orders,” Vashishta added.

Diesel-run pumps in the lake vicinity

Bommai noted that there has been a severe drought and unprecedented floods since last year. This has caused large-scale damage to public property and affected people’s daily lives.

The chief minister’s office, quoting Bommai, said in a statement that the state is expecting cooperation from the World Bank for flood management in Bengaluru and that the government would extend full cooperation by agreeing to the implementation of these projects in a phased manner.