Editorial: Big Oil shouldn’t be able to fleece Californians while polluting the planet 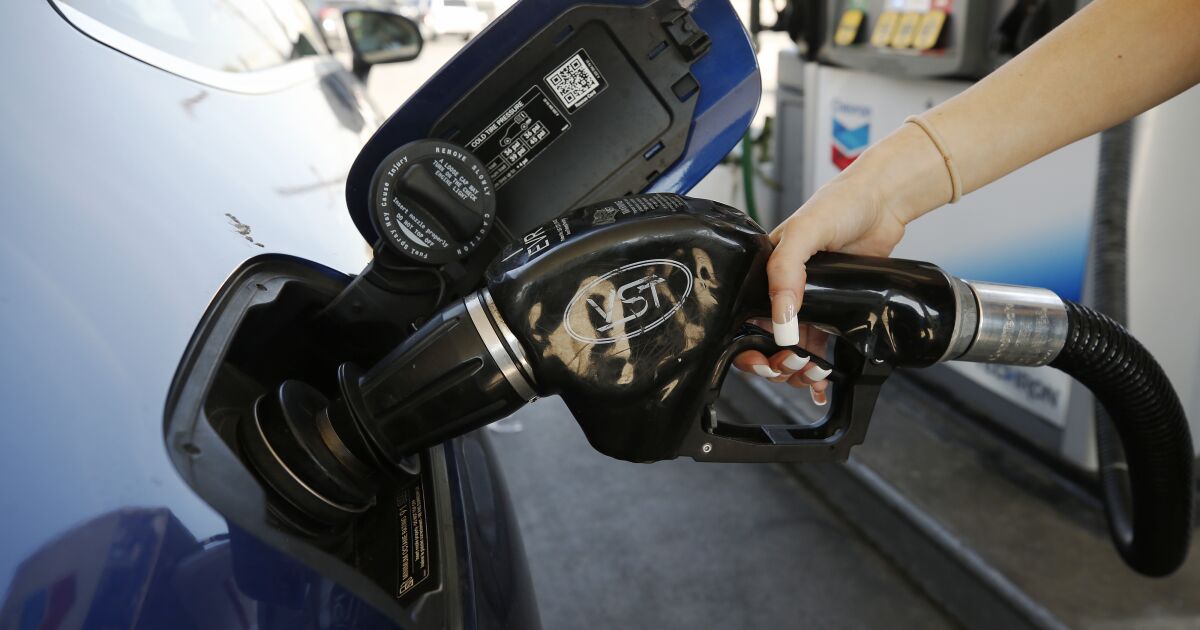 Gov. Gavin Newsom’s proposal to penalize excessive oil refinery profits is a relatively straightforward effort to prevent price gouging that reached new heights this year as gas prices in the state spiked to more than $6.40 a gallon. While Californians paid $2.60 a gallon more than the average American motorist to fill their tanks, companies such as Chevron, Valero and Phillips 66 raked in billions in record profits.

It’s bad enough that oil companies peddle a product that pollutes the air and heats the planet while using their money and influence to block climate action. They shouldn’t be allowed to fleece Californians while they do it.

The details of Newsom’s proposal are still being worked out, but it’s essentially a cap on excessive oil refinery profits. If a refiner’s profit margin per gallon of gasoline exceeds a yet-to-be-determined threshold, the state would issue a penalty, claw back a percentage of those profits and return it to California consumers.

It’s good to see the governor put his political muscle behind curbing oil companies’ greed and give it prominence by convening a special legislative session this week. It may be savvy politics for Newsom, who has battled the multibillion-dollar oil industry in recent months on behalf of California consumers he says are being ripped off. But the special session — the first since Newsom took office in 2019 — also places a bigger spotlight on lawmakers and more pressure on them to deliver.

Now is a crucial time to rein in this industry. As the state advances a zero-emissions vehicle mandate and a suite of other measures that are expected to reduce petroleum consumption by more than 90% over the next two decades, oil companies will seek to squeeze as much profit from Californians for as long as they can. And in an atmosphere of dwindling demand for their product, you can expect them to keep blaming the state’s climate policies for the high prices, even though they are only partly responsible.

“If you want to achieve your climate goals, you need to have a price-gouging penalty to prevent the oil companies from weaponizing gas prices,” said Jamie Court, president of the nonprofit advocacy group Consumer Watchdog, which pushed for the special session to consider a windfall profits tax.

Newsom administration officials are now describing the proposal as a penalty, rather than a tax, and say it is not designed to raise a lot of money for the state but to be a deterrent against price hikes. But it functions largely the same.

The distinction is important in one way, though, because a bill that imposes a penalty can pass with a simple majority, while a tax, designed to raise revenue, would require a supermajority vote in the Legislature, which has been reluctant to get tough on the oil industry and defy a powerful lobby with allies in organized labor. And in a special session, any legislation that is passed can take effect after 90 days, meaning that it could be in place by the summer to help rein in price spikes.

It won’t be easy. Oil companies spent millions this year electing Republicans and moderate Democrats to the state Legislature. The petroleum industry and other business interests have already begun fighting the anti-price-gouging proposal, calling it “Gavin’s New Gas Tax” and suggesting it would lead to higher prices at the pump.

But if structured right, it should do the opposite.

Severin Borenstein, an energy economist at UC Berkeley’s Haas School of Business, said the anti-gouging policy needs to be crafted carefully to claw back excess oil profits without disrupting the market by reducing supply. Winning support from lawmakers may also require setting the penalty so it would apply only to the very highest price spikes, which we’ve seen just a handful of over the last decade.

California consumers already suffer from a lack of competition, with a highly consolidated market, only five major oil refiners and a much higher percentage than other states of branded gas stations that charge customers a premium compared to independent stations.

There is a lot of uncertainty around what drives California’s highest-in-the-nation gas prices, and regulators say they simply don’t have enough information to explain. Since 2015, Californians have paid more than $40 billion in what Borenstein calls a “mystery gas surcharge,” a 30- to 40-cent-per-gallon price differential that cannot be explained by the state’s higher taxes and stricter environmental standards.

Oil companies aren’t eager to shed light on what’s behind high gas prices. All of the state’s five major oil refiners were no-shows at a California Energy Commission hearing on the issue last month.

That’s why another piece of the governor’s proposal, which seeks to improve oversight and transparency by expanding regulators’ authority to collect data and investigate costs, profits and pricing, is so important. If that information is used to inform new regulations to protect consumers, it could be more meaningful than the penalty, because such rules could help bring down the high gas prices Californians pay on an ongoing basis, and not just during occasional spikes.

There is reason for optimism coming on the heels of Newsom’s successful, if last-minute, effort to advance a series of bills to accelerate the state’s climate actions, some of which previously failed to make it through the Legislature because of opposition from Big Oil, labor groups and allied lawmakers. Four of his five proposals became law. There’s no reason something as broadly popular as lowering gas prices and holding oil companies accountable should not overcome that opposition too.