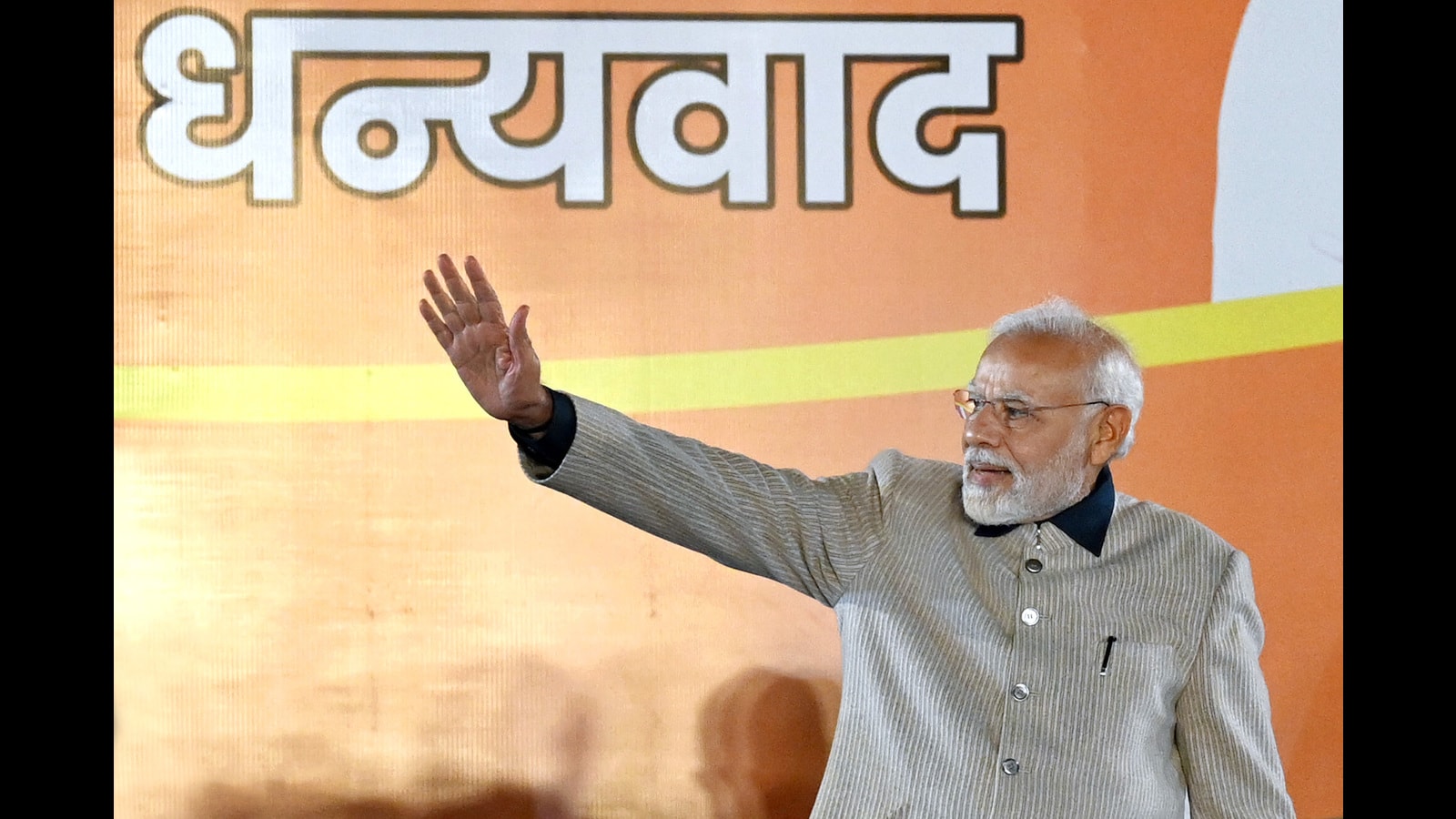 Modiji, Hindutva, Rashtravaad aur Vikas,” declared a jubilant Bharatiya Janata Party (BJP) worker at the party headquarters in Ahmedabad, struggling to speak over chants of Vande Mataram and the victorious beats of an impromptu garba. He said it better than any pundit could.

The cult of personality, welfarism, nationalism and Hindutva are all fragments of the Modi brand, stronger than ever before after the dazzling win in Gujarat, one that broke a 37-year-old record to become the best performance by a political party in the state. A seventh consecutive term, an increase in vote share that breaches the 50% threshold and a seemingly teflon popularity, undisturbed by tragedies, such as the the collapse of the Morbi bridge — these are all telling reminders of the unequivocal and remarkable support for the Prime Minister (PM) Narendra Modi in his home state.

But let the focus on PM Modi’s chemistry not take away from the ruthless science of the BJP election machinery. The PM provokes pro-incumbency; it’s not always the same for the BJP which can often trigger anger and discontent over localised issues of governance. We forget now that the BJP axed 44 sitting legislators in Gujarat and embraced more than 30 new entrants since 2017 from the Congress. Among those who did not even contest were former chief minister (CM) Vijay Rupani and his deputy, Nitin Patel.

It has often taken the PM to iron over the creases in the BJP fold. There are instances from elsewhere, such as in Uttarakhand, where the chief ministerial candidate lost, but the BJP won the state.

But the inability to win the Himachal Pradesh assembly shows the limitations of this over-dependence on PM Modi in local polls. Micro-issues (apple farmers) and micro-politics (the factionalism within the BJP between the Jairam Thakur and Prem Kumar Dhumal camps) can determine outcomes in a way that may be different from how the same voter will react in a national election. Delhi is, of course, a great example of this. The BJP swept the Lok Sabha elections, but the party has not been in power in the assembly since 1998. And just lost its 15-year-old grip over the municipal bodies.

Which brings us to the other big story of the election season — the arrival of the Aam Aadmi Party (AAP) on the national stage. Of course, the party would have hoped for more seats — throughout the campaign, Delhi CM Arvind Kejriwal even asserted that the AAP had a chance at forming the government in Gujarat — but between the clear and feisty win in Delhi’s civic polls and a 13% vote share on Modi-Shah’s turf, the AAP has demonstrated that it is not a party that can be ignored. As India’s newest party, to have hit these milestones in just a decade is no mean feat.

What makes Kejriwal appealing is simultaneously also the AAP’s challenge — its newness. The party travels light without the baggage or historicity of its competitors. But the absence of a cadre and established infrastructure presents challenges to its expansionist ambitions. Still, one must recognise that of all the Opposition leaders today, Kejriwal is the one with pan-India recall. And it is the Congress that should be terrified of the AAP’s rise.

The wipe-out of the party in Gujarat could lead to an exodus, not just in the state, but elsewhere. The party can draw some solace from its ability to keep Himachal Pradesh in conformity with the pendulum pattern of incumbent parties being voted out; but the BJP did not let it go without a fight. And imagine, if you will, how much more complicated that fight would have got if the AAP had taken Himachal Pradesh more seriously. In contests with narrow margins, the split of the anti-BJP vote could have made all the difference in an election where less than 38,000 votes were the difference between the two main parties.

The disassociation between Rahul Gandhi’s Bharat Jodo Yatra and electoral politics remains mystifying. Effectively, Gandhi was missing from Gujarat through the entire campaign, failing to build on the 77 seats the party had taken in 2017. While no mass mobilisation programme can ever be faulted, the refusal to locate it within the parameters of polls makes it more motherhood and apple pie than strategy and statistics. The so-called low-key Congress strategy in Gujarat was handed over to Ashok Gehlot who was the All India Congress Committee observer for the polls, while Sachin Pilot successfully oversaw Himachal Pradesh. In that lies the tale of the next state where the Congress, unwilling and unable to solve its leadership issues, is in danger of a debacle.