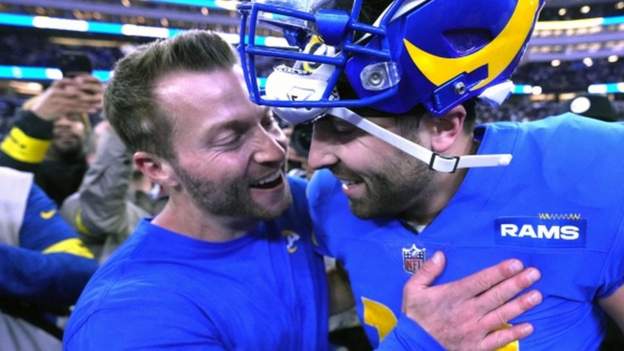 Mayfield joined the Carolina Panthers in July but they agreed to release the former number one draft pick on Monday.

The following day he was signed by the Rams and on Thursday he led two late touchdown drives as last season’s Super Bowl winners snatched a 17-16 win.

He added: “It sucked having to leave [the Panthers] but when it works out like this, it’s for the best.”

The Rams had lost their last six and came into the game with a 3-9 record, the worst start to a season by any Super Bowl winner.

Matthew Stafford, who led the Rams to the NFL title in his first season, is out with a spinal cord contusion while back-up quarterback John Wolford has been struggling with a neck injury.

Mayfield replaced Wolford on the Rams’ second possession and went on to complete 22 of 35 passes for 230 yards, including the game-winning 23-yard touchdown pass to Van Jefferson with 10 seconds remaining.

Mayfield, who was traded by the Browns in July to make way for Deshaun Watson, directed a 17-play, 75-yard drive, capped by a one-yard Cam Akers touchdown run to make it 16-10 with 3:19 remaining.

Despite having had limited time to learn the Rams’ playbook, he then led a 98-yard drive in just 95 seconds to set up Jefferson’s match-winning moment.

“This is up there,” Mayfield said. “I didn’t think it was going to play out like this but I’m glad we covered the [final] two-minute operation.

“We talked about the concepts I like and luckily I had run a lot of them. That put me in position to win.”

Las Vegas led for most of the game, with the NFL’s rushing leader Josh Jacobs making a one-yard touchdown run to help the Raiders to a 13-3 half-time lead.

Daniel Carlson’s 36-yard field goal with 12:20 left gave the visitors a 16-3 cushion before Mayfield managed to mastermind the late fightback.

“For him to just get here and do what he did was incredible,” said wide receiver Jefferson. “He just came in and worked hard. That’s Baker Mayfield.”