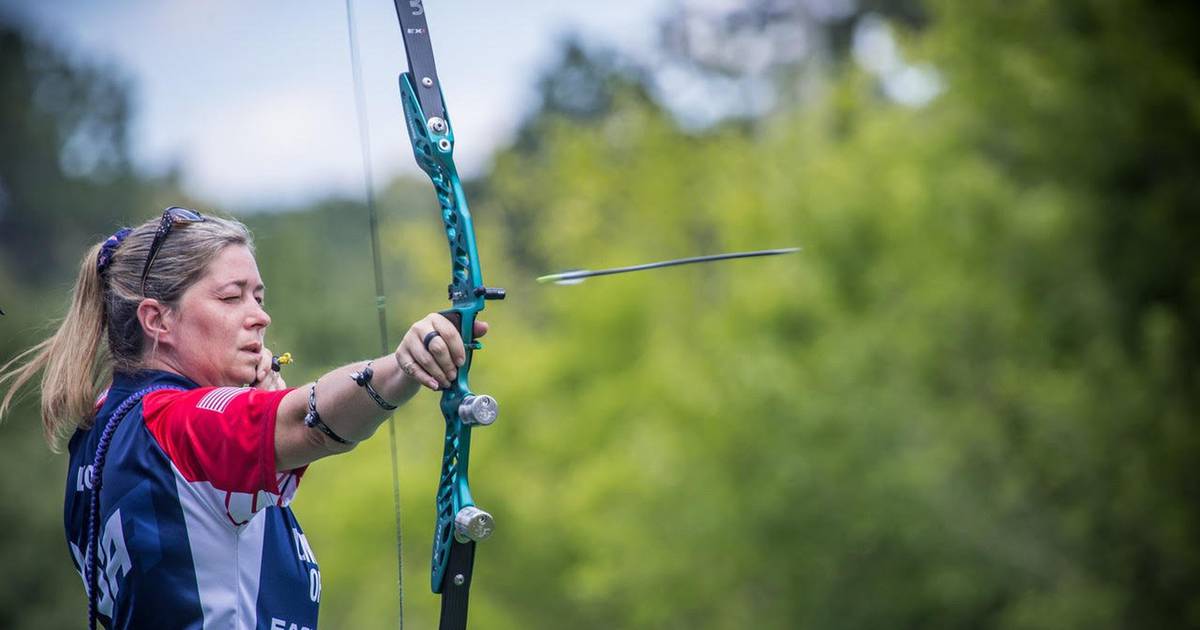 
Three years ago, after taking her daughter to an archery lesson, Chrissie Lyons, of New Lenox, decided to try the sport out herself.

In November, Lyons competed in the Pan American Championships in Santiago, Chile, and won three gold medals for individual, mixed and women’s team in barebow recurve archery. At the U.S. Nationals in August 2020, Lyons broke the world record for double-round archery.

“There’s nobody more surprised than me,” Lyons said. “Every time I was just like, There’s no way. This can’t keep happening.’”

“I like that I’ve proven that wrong and there’s lots of foster kids that prove that wrong,” Lyons said. “I’m not just doing archery for me anymore.”

Archery lessons started off as an activity, and slight distraction, from the fact her daughter was away at basic training for the U.S. Army and they couldn’t communicate regularly, Lyons said.

“Being cut off from her was kind of triggering for me after being moved with many families,” Lyons said. “I was using archery as a therapy. I enjoyed it, but I was using it as something to be distracted.”

But, within three months, she was scoring at the elite level, Lyons said. After six months, Lyons said her coach told her she has to compete.

Her initial reaction was to say no to competition. But, then she researched archery scores and was shocked and excited, she said.

“My stomach just dropped out of me when I realized that I was shooting scores with the top women in the world,” Lyons said. “I wanted to see how far I can take the archery thing.”

In September 2019, Lyons broke her leg, which required surgery and therapy, she said. But training for her first competition that November and then the Midwest Open that December, where she placed first, helped her get through it, Lyons said.

“If I have one lesson for the world, it’s find your passion and make it a journey because you don’t know where it will take you,” Lyons said.

At the 2020 U.S. Nationals, Lyons said that was her first time shooting 55 yards, or over half a football field. Over the course of two days, Lyons and the other competitors faced off in shooting 12 rounds, six arrows per round, with points counted from one through 10, which is the bull’s-eye.

She nearly broke the world record for single day shooting, Lyons said, but after cameramen started following her emotion took over and her score dropped under the world record. But, she went on to break the two-day shooting record, with a total of 1,227 points out of a possible 1,440, Lyons said.

“One thing about archery is, it’s not just physical. It’s very, very mental,” Lyons said. “Adrenaline is not your friend in archery.”

Her biggest competition to date, Lyons said, was competing in the World Games in July. She took home the silver medal, making her the first woman for team U.S. to medal in barebow archery, Lyons said.

“To get silver at World Games, unless I won gold, there’s nothing bigger for me than the World Games,” Lyons said.

She said her goal with Olympic recurve archery is to make the 2028 Olympic team.

“I’m not young, so it’s a risk,” Lyons said. “We’ll have to see how much energy I have. I definitely have the mental game … now it’s just more do I have the physical endurance and stamina to train.”

Jeff Sanchez, the owner and head coach at BowDoc Archery, said he’s worked with Lyons from the first time she picked up a bow. Sanchez said he will train with Lyons on the Olympic recurve “to see what she can accomplish in that style” as the Olympic trials begin next year.

“It has been amazing to work with someone that has an incredible work ethic toward her training as well as the drive and determination to reach her goals,” Sanchez said.

“USA Archery is grateful for Chrissie’s dedication to excellence in the sport and is proud to have her represent our country on the world stage,” Boyd said.

Lyons coaches archery through programs that New Lenox, Frankfort, Manhattan and Mokena park districts offer at BowDoc Archery, she said. Coaching archery has been rewarding, Lyons said, and she loves watching others get as excited about archery.

Competing in barebow archery has been financially difficult, Lyons said, because she pays for all travel and expenses to compete. Lyons said one reason she’s going to start training in Olympic recurve is because there’s opportunity for financial support.

The better she got, Lyons said she decided to take out a loan on her house to help her fund her athletic career.

In the last six months, Lyons spent $10,000 to compete in World Field and World Games, and she’s competed a lot in the last three years. Lyons started a GoFundMe page to help raise funds for competition.

Her favorite part about archery, Lyons said, is meeting people from all over the world and learning about them while bonding over a shared passion for archery.

But Lyons said she is still adjusting to being recognized in the archery world. Her family is also adjusting to that, Lyons said with a laugh, recalling how her daughter wrote an essay for college about the effect of niche fame on the family.

Lyons said she would encourage everyone to follow their interests and passions.

“Try new things, and if you like it keep doing it,” Lyons said. “You just don’t know where it will take you.”