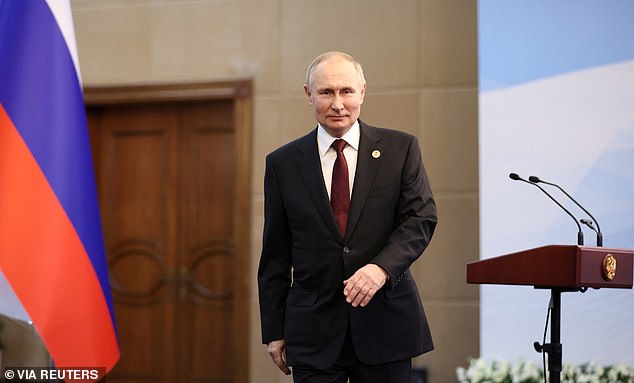 
Vladimir Putin vowed on Friday that any country that dared attack Russia with nuclear weapons would be wiped from the face of the earth.

The Russian president said his country had no mandate to launch a preventative first nuclear strike, unlike the United States, but that advanced hypersonic weapons would ensure it could respond forcefully if it came under attack.

His comments came after a meeting of regional leaders in Kyrgyz capital Bishkek.

Putin also told reporters a deal would ultimately need to be struck to end the conflict in Ukraine. He claimed the Kremlin was open to reaching an agreement but declared that trust with Western and Ukrainian powers was ‘almost zero’.

Putin said Russia had no mandate to launch a preventative first strike, but that his hypersonic weapons would ensure Moscow could respond with great force should it come under attack (Russian test launch of Sarmat ICBM)

Addressing the media following a meeting with leaders of the Eurasian Economic Union – Russia, Belarus, Kazakhstan, Kyrgyzstan, and Armenia – Putin said Russia wanted to find a peaceful solution in Ukraine, but was betrayed by the breakdown of the Minsk agreements.

The Kremlin chief said Germany and France – which brokered the ceasefire deals in the Belarusian capital Minsk between Ukraine and Russian-backed separatists in eastern Ukraine in 2014 and 2015 – had betrayed Russia and were now pumping Ukraine with weapons.

In an interview in Germany’s Zeit magazine on Wednesday, former German chancellor Angela Merkel said the Minsk agreements were drawn up merely in an attempt to ‘give Ukraine time’ to build up its defences in the face of Russian aggression – comments which Putin claimed have ‘disappointed’ him.

In this file photo taken on August 20, 2021 Russian President Vladimir Putin (R) and then German Chancellor Angela Merkel enter the hall for a joint news conference following their talks at the Kremlin in Moscow

Putin went on to discuss yesterday’s high-profile prisoner swap between Washington and Moscow, saying more US-Russian prisoner exchanges are possible moving forward after the event in the United Arab Emirates went without issue.

Asked whether other prisoners could be swapped, Putin said ‘everything is possible’, noting that ‘compromises were found’ to clear Thursday’s exchange.

‘We aren’t refusing to continue this work in the future,’ he added.

Despite negotiating the swap for Griner, the most high-profile American jailed abroad, the US failed to win freedom for another American – corporate security executive and former marine Paul Whelan, who has been imprisoned in Russia since December 2018.

The decision to exchange a basketballer for a world-renowned arms dealer and intelligence asset over a military veteran has angered many U.S. politicians and commentators.

Pictured: Brittney Griner is seen on a plane on her way back to the U.S.

Pictured: ‘Merchant of Death’ Viktor Bout is seen onboard a plane heading back to Russia

Arms smuggler Viktor Bout from Russia is escorted by a member of the special police unit as he arrives at a criminal court in Bangkok October 4, 2010

The Russian president later told the media he agreed with the decision of courts to imprison one of his critics and political opponents – though he claimed to have no knowledge of the detainee.

A Moscow court today sentenced opposition politician Ilya Yashin to eight and a half years in prison for spreading ‘false information’ about Russia’s offensive in Ukraine, the highest-profile conviction under new legislation criminalising criticism of the assault.

The 39-year-old – an ally of jailed opposition leader Alexei Navalny and Boris Nemtsov, a former opponent of Putin who was assassinated in 2015 – is the latest in a long line of Kremlin critics to have been sidelined in recent years in a crackdown that has intensified after Putin sent troops to Ukraine.

Supporters in the courtroom applauded Yashin, who smiled and waved to family despite being handcuffed, as the sentence was read out.

Judge Oksana Goryunova said Yashin had committed a crime by disseminating ‘knowingly false information about Russia’s armed forces’ and sentenced him to eight years and six months in a penal colony.

In April, he had described the alleged murder of civilians in Bucha as a ‘massacre’, referring to a town near the Ukrainian capital Kyiv where civilians were found killed after Russian forces pulled back.

But when asked about Yashin’s conviction on Friday, Putin feigned ignorance and asked: ‘And who is he? A blogger?

‘I think its inadvisable to question the court’s decision.

During one exchange with a journalist at the press conference in Bishkek, Putin delivered a line which perfectly encapsulated his dictatorial nature.

When asked by a Radio Vesti reporter who to trust regarding contradictory information on the supply of Russia’s military, Putin jovially responded: ‘You can’t trust anyone – only me.’

The leader delivered the line with a laugh but his collegial tone did little to mask his unwavering belief in the statement.

‘The [supply] problems are far from being completely resolved, but it is a matter of time… the most acute ones, I think, have already been sorted,’ Putin concluded.

And the Kremlin chief also warned Russia could reduce oil production in response to a $60 price cap on its oil exports agreed by Western nations.

The price ceiling agreed by the EU, G7 and Australia came into force on Monday and seeks to restrict Russia’s revenue while making sure Moscow keeps supplying the global market.

‘We will consider a possible reduction in production if necessary,’ Putin told reporters, adding that the price cap was a ‘stupid decision’ that is ‘harmful to global energy markets’ but ‘isn’t affecting’ Russia.