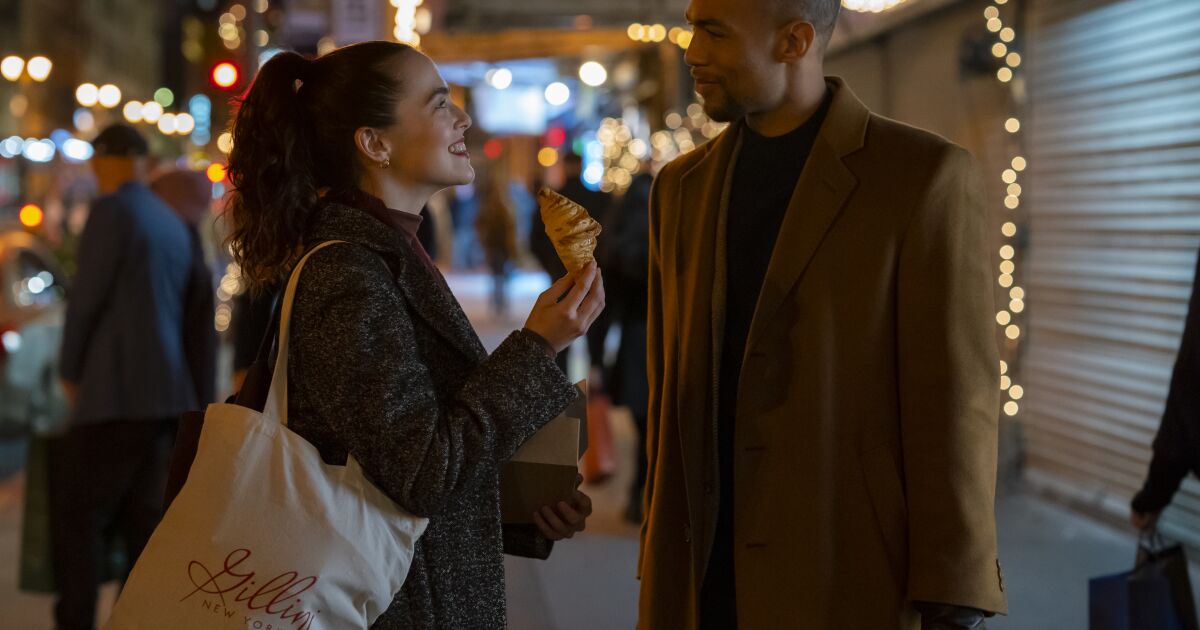 Based on a Melissa Hill novel, the holiday rom-com “Something from Tiffany’s” has the kind of topsy-turvy scenario common to these kinds of movies — though director Daryl Wein, screenwriter Tamara Chestna do try to make the zaniness feel more grounded in reality. The big mix-up happens early in the film, when a slacker New York tattoo artist named Gary (Ray Nicholson) gets hit by a car after some last-minute Christmas shopping and is assisted by the recently widowed Los Angeles dad Ethan (Kendrick Sampson). The two men accidentally swap Tiffany’s bags, which becomes a huge problem, since Ethan’s contained an expensive engagement ring for his girlfriend Vanessa (Shay Mitchell) while Gary had just purchased some simple earrings for his lady, Rachel (Zoey Deutch).

Deutch brings a real spark to the role of Rachel, a talented baker who has endured the forgetfulness and inattentiveness of her barely good-enough boyfriend for years, before opening the box with the ring on Christmas morning and seeing him in a whole new light. Rachel’s genuine joy at not being taken for granted for once is charming — thanks in large part to Deutch’s wit and brightness — though she also starts seeing other possibilities for her life when Ethan shows up with his young daughter, trying to find a polite way to ask for the ring back.

Although “Something from Tiffany’s” was shot in a festive, lit-up New York City, there’s a flatness to the look and tone of the film that keeps it from crossing the line from “something to put on while wrapping presents” to “something to watch with the whole family every Christmas.” As a movie, it’s more of a Gary than an Ethan. But Deutch and Mitchell are so likable that it’s easy to root for their characters — and to root for the actors too, to someday get cast in more enduring films.

‘Something from Tiffany’s.’ PG, for language, some suggestive comments and a drug reference. 1 hour, 27 minutes. Available on Prime Video

The Dutch writer-director-actor Alex van Warmerdam has been making movies and theater pieces alongside his producer brother Marc for more than 40 years; and the one thing his work tends to have in common is an almost reckless unpredictability. Van Warmerdam follows his stories where they take him, regardless of whether they conform to any genre or cohere as conventionally satisfying narratives. In fact, his 10th film — the cheekily titled “Nr. 10” — never quite comes together at all, though from scene to scene it remains curiously compelling.

Tom Dewispelaere plays a middle-aged actor named Günter, whose life begins spinning out of control due to both his sexual indiscretions with a colleague and a larger conspiracy involving the Catholic Church in cahoots with some shadowy figures who claim to know a huge secret about Günter’s past. Van Warmerdam saves their revelations until the film’s final third; and while the surprise is a doozy, it doesn’t really complete the movie’s puzzle so much as raise a bunch of new questions.

Still, even if viewers can’t make sense of it all, they should be able to connect to the way Van Warmerdam revisits some of his favorite themes — including the idea that we’re all actors really, struggling to remember our lines and motivations. It’s too pat to say that “Nr. 10” is a film “about alienation.” But as its plot barrels from one point to the next, it does create the sensation of feeling out of sync with the world, desperately seeking explanations even if they ultimately explain nothing.

The great Ali Suliman has been in demand for years as a character actor in American action films; but he’s always been at his best when he gets a chance to be a leading man, usually in dramas from Israel and Palestine. He gives one of his finest performances in writer-director Ameen Nayfeh’s “200 Meters,” playing Mustafa, a construction worker taking extraordinary measures to get from one side of the West Bank wall to the other after his son is hospitalized. Suliman’s Mustafa just radiates decency, even when other people think his nationality alone makes him suspect.

Nayfeh scores some sharp political points in “200 Meters,” taking viewers through Mustafa’s increasingly nightmarish odyssey: getting turned away at a checkpoint on a bureaucratic technicality, striking a deal with smugglers to cross the border and then getting drawn into one crisis after another as his traveling party (which includes a German documentary filmmaker) winds through hundreds of miles of backroads. The movie is mostly about Mustafa himself, a loving father and husband who endures whatever he has to in order to provide for his family. But as played by Suliman — with his kind eyes and thoughtful demeanor — Mustafa’s burdens feel especially undue.

‘200 Meters.’ In Arabic and Hebrew with subtitles. Not rated. 1 hour, 36 minutes. Available on VOD

Writer-director Joseph Sackett gives the body-swap farce an LGBTQ update in “Homebody,” a short, sweet fantasy film that works best when it leans into the possibilities of its situation — and less well when it tries to be funny. Colby Minifie plays Melanie, a Brooklyn doula and a babysitter to a kid named Johnny (Tre Ryder), who isn’t entirely sure if he has a crush on Melanie or if wants to be her when he grows up. When Johnny projects his soul into Melanie’s body, he is at once fascinated and overwhelmed with how it feels to be a woman — that is, until one of Melanie’s clients calls and says she’s in labor.

The parts of “Homebody” that are more overtly comedic — where Johnny pretends to be an adult but keeps botching it — mostly fall flat. But there’s a poignant sense of yearning that animates this movie, as Johnny is compelled to push this little metaphysical experiment maybe further than he should, by dressing more feminine than Melanie and flirting with adult men, to see what it’s like. He doesn’t fully understand what he’s doing or why — only that he has some need. That curiosity feels genuine and relatable, regardless of one’s age or gender.

In terms of plot and action, there’s not much to distinguish the British thriller “Renegades” from any other budget-priced VOD shoot-em-up. Director Daniel Zirilli and screenwriter Tom Jolliffe (working from a story by producer Jonathan Sothcott) do a serviceable job with a very basic premise about a motley crew of ex-military buddies who go an a tear through London’s criminal underground when their friend gets murdered. But what does make the movie a few degrees more entertaining than most is its cast, which includes Lee Majors as a saintly old soldier, Nick Moran as his fiery friend and Danny Trejo as a helpful insider in the gangs. Throw in the likes of Ian Ogilvy, Louis Mandylor and Michael Paré and that’s a lot of grizzled tough guy potential. Even when these guys are just sitting around in cars and pubs, they’re fascinating.

‘Renegades.’ R, for violence throughout, pervasive language, and drug use. 1 hour, 31 minutes. Available on VOD

It’s easy to see what writer-director Joe Begos was going for with “Christmas Bloody Christmas,” a semi-comic holiday horror movie that aims to bring back some of the sex, splatter and general vulgarity that’s been missing from slasher pictures lately. But the overall vibe here ends up being less “good dirty fun” than “foul-mouthed teenager trying to look cool.” Begos earns bonus points for his bad guy: an axe-wielding robot Santa Claus that gets its wires crossed and goes on a kill-spree. But the film gets off to a very bad start, with an opening half-hour that essentially consists of a fast-talking record store owner named Tori (Riley Dandy) and her opinionated employee Robbie (Sam Delich) having an irritating, profanity-laden conversation about rock bands, movies and their pent-up lust. For those who can make it through that exhausting setup, “Christmas Bloody Christmas” does offer some decently grubby human-versus machine fight scenes. After the first third though, viewers might actually be rooting for the robot.

“Ticket to Paradise” is an old-fashioned star vehicle bringing together the ridiculously charismatic duo of George Clooney and Julia Roberts for a classic romantic comedy plot about a divorced couple whose feelings are rekindled when they reluctantly attend their daughter’s wedding in Bali. Though the movie had a decent run at the box office it should pick up some more fans now that it’s streaming. Available on Peacock

Available now on DVD and Blu-ray

“Black Christmas,” directed by Bob Clark (“A Christmas Story,” “Porky’s”), is a different kind of holiday classic: a highly influential 1974 Canadian slasher picture filled with sly humor and well-crafted scares. The new special edition 4K/Blu-ray set contains the best-looking (and sounding) version of the film yet, supplemented with multiple commentary tracks and hours of new and vintage featurettes. Scream Factory