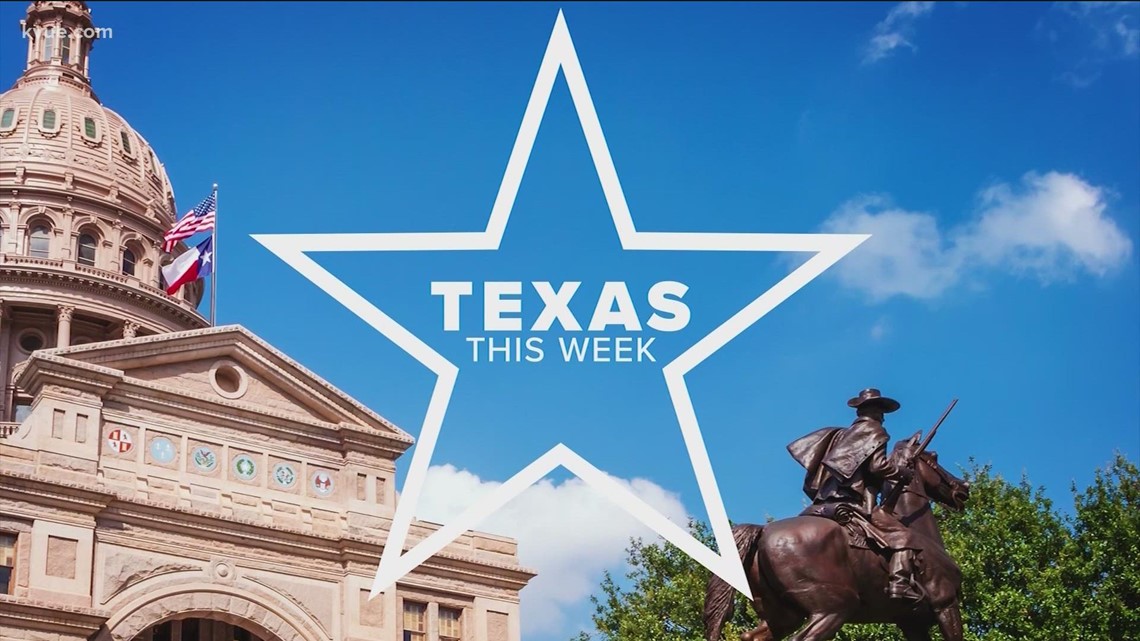 AUSTIN, Texas — In this week’s edition of Texas This Week, the candidates for Austin City Council District 5 share why voters should elect them.

Giving Texas homeowners some property tax relief is at the top of Lt. Gov. Dan Patrick’s 2023 to-do list. On Wednesday, Patrick, who presides over the Texas Senate and has a great deal of power over legislation, released his top legislative priorities. The 21 items not only include property tax relief but also border security, including funding to continue Gov. Greg Abbott’s Operation Lone Star, and improving the reliability of the Texas electric grid. The 88th legislative session starts Jan. 10.

The City of Uvalde is suing the Uvalde County district attorney in an effort to get answers about the Robb Elementary School Shooting. The lawsuit, filed Thursday, accuses the DA of withholding information from the independent investigator hired by the city to investigate the police response. The DA says she’s not releasing that information to avoid possible interference into her office’s investigation into law enforcement. KVUE News also learned a group of Texas lawmakers have gotten portions of the Department of Public Safety files on the Uvalde shooting by signing non-disclosure agreements with DPS.

U.S. Senators passed historic legislation this week to protect same sex and interracial marriage in the event the supreme court overturns federal protections. The Respect for Marriage Act does not force states to legalize same-sex marriage but it does require them to recognize legal marriages from other states regardless of “sex, race, ethnicity or national origin.” The bill passed with bi-partisan support but Texas Sens. John Cornyn and Ted Cruz, along with the majority of senate republicans, voted against it. The U.S. House of Representatives already passed similar legislation and is expected to send the bill to the president’s desk.

In District 5, which covers South Austin, voters will decide between communications professional Stephanie Bazan, who got 29% of the vote in the November election, and Ryan Alter, a Capitol staffer and attorney who ended the night with 25% of the vote. Both candidates talked with Ashley Goudeau about their campaigns.

Goudeau: The race for District 5, you guys were very, very close, but you had, you know, a bit of a sizable lead over Ryan Alter, 29% to 25%. Tell our viewers what you believe makes you the better candidate in this race.

Bazan: “Thank you so much for that question. So I do believe that I’m the better candidate for multiple reasons. One, I have been deeply involved in my community in South Austin since I was a young Girl Scout. And so, I have a commitment to service that shows through. And you could tell that when I was in the lines the day of voting, I wouldn’t have 20 minutes passed before I would run into a former student or somebody who I knew from church or other things. And so, you could tell that deep community involvement and the South Austinites were coming out for me. The other thing that I feel that’s important is the way that I communicate with voters in my community. And I’ve been told that I make policy sound simple, and that’s really something that I’m trying to do, is make sure that people, when they’re busy doing their everyday tasks, whether that’s work or taking kids to school, that they can count on me to make sure that I am sharing what’s happening at City Hall with them in easy-to-digest ways.”

Goudeau: I want you to tell us what you believe is the biggest issue impacting the people living in District 5 and what you would do to address it if you’re elected to the council.

Bazan: “Thank you so much for that question. And so, when I am at the doors, I am hearing from people about affordability and housing. And so, those are two things that I am looking to address. I have visited with many, many experts in these areas and also attended the city summit put on by the Austin Monitor to talk about these issues specifically. So some things that we can do around housing that has already been talked about on the dias is looking at relaxing compatibility, also looking at permitting and streamlining that process for homeowners. We do need to make sure that our city is accessible for the everyday working person. And I’m hearing stories over and over again about teachers and EMS and folks that are really the backbone of our community who are not able to stay in town. And so, we need to make sure that there are a diversity of housing options, our missing middle housing, is available for people to be able to work here and stay. And then we need to look at transportation options because we do know that when people can live closer to work and have more opportunity, that also affects their pocketbook. A lot of the money that we spend is on housing and transportation. And so, if we target those two areas, that is helping the everyday person.”

Goudeau: I want you to tell our viewers why you believe you are the better candidate in this runoff race.

Alter: “Absolutely. I think the really big separator in this runoff is really experience and ability to show up and get stuff done. You know, I have spent my career in public service working on these issues, whether it’s housing, health care, transportation. There are pressing needs that Austinites have and that District 5 residents have. And I have the experience to show up on day one and get us moving forward. We can’t afford just talking about these issues anymore. We need someone ready with solutions to move us forward. And I think that’s what I have to offer.”

Goudeau: What would you do to address the housing and affordability crisis if you are elected to council?

Alter: “So, it gets real complicated, real wonky, pretty quick. But really, at a high level, what you see not only throughout District 5 but throughout Austin is scraping a lot and building a really big home that very few people can afford. And this not only limits who can buy new homes in Austin, but it has that impact on the neighbor who might be that fixed-income resident who now has a multimillion-dollar home next to them and that is dramatically increasing their property values and making it so that they can’t even stay in their home. And so, what I am proposing is, at its fundamental level, a trade. You know, right now we make it incredibly difficult, if not impossible, to build something other than that expensive home. And that’s because that’s basically all the code allows for. And what I think we should do is instead say, look, we’re going to allow for more options, a diversity of housing if the lot can can sustain it. You know, every lot is different. And so, this takes a lot by a lot of approach where maybe you have a larger lot that could sustain three condos, or not condos, cottage-type homes or maybe a four-plex. We’re not going to charge an impervious cover. So you can’t take over a lot and have adverse environmental impacts. But by creating those additional options and pairing it with making those options actually easy to pursue, instead of right now, the very burdensome and lengthy process that disincentivizes anyone from doing this – that you are going to be more attracted to do this. And the tradeoff that the city gets is we’re going to require three quarters of those to be affordable. And so, we are saying we’re going to create this easier route to make more attainable housing. And, in return, you’re going to make it at a price point that people can actually afford. And I think it’s a real idea that will have a real impact for people across the city.”

Budget 2023: A breakdown of key numbers projected for next fiscal