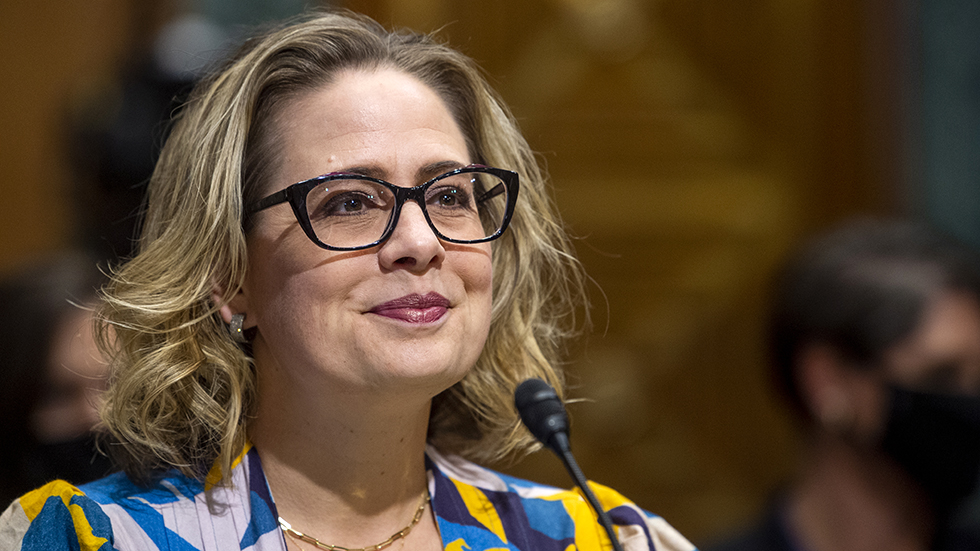 –> A midday take on what’s happening in politics and how to have a sense of humor about it.*

Sinema leaves Democratic Party to be an Independent

Sen. Kyrsten Sinema (I-Ariz.) is calling it quits with the Democratic Party, switching teams to become an independent.

In a media blitz Friday morning, the freshman senator announced that she has left the Democratic Party and registered as an Independent, marking a significant shakeup for the Senate as it heads into the 118th Congress.

What she’s saying: “I registered as an Arizona independent. Like a lot of Arizonans, I have never fit perfectly in either national party,” the senator said in an AZ Central op-ed this morning.

Sinema’s decision doesn’t come as a complete surprise. The Arizona lawmaker has been a centrist throughout her four years in the Senate and is known for working closely with Republicans on various issues.

In this year alone she helped reach bipartisan breakthroughs on gun safety legislation and a measure to protect same-sex marriage, both of which passed through the evenly split 50-50 Senate and were signed or are expected to be signed into law by President Biden.

But she’s also seen herself at odds with the rest of the Democratic caucus, holding firm against weakening the legislative filibuster and, over the summer, driving the party to remove a provision closing the so-called carried interest loophole from their tax and climate package to win her vote. She did, though, ultimately vote for the bill.

AND IT WON’T CHANGE MUCH FOR DAY-TO-DAY BUSINESS IN THE SENATE:

Senate Majority Leader Charles Schumer (D-N.Y.) said Sinema will keep her committee assignments which, according to The New York Times, means Democrats will maintain their 51-49 seat majority over Republicans in the next Congress.

But it remains unknown which party Sinema will caucus with. The chamber’s other two independents — Bernie Sanders (Vt.) and Angus King (Maine) — caucus with Democrats. Sinema told Politico that she won’t caucus with Republicans or attend the weekly Democratic Caucus meetings, which she wasn’t doing frequently anyhow.

Sinema, however, says things will maintain the status quo: “Nothing will change about my values or my behavior,” she told Politico.

How are her colleagues taking it? A mixed bag.

Rep. Ruben Gallego (D-Ariz.), who was seen as a potential primary candidate to Sinema when she faces reelection in 2024, said his fellow Arizonian “is once again putting her own interests ahead of getting things done for Arizonans.” More from The Hill’s Al Weaver.

Sen. Amy Klobuchar (D-Minn.) to CNN: “I don’t think it’s going to greatly change the way the Senate is working right now and in any way take away from the victory that Democrats have. Because for all sense and purposes, Chuck Schumer is still the majority leader and we will still be able to get a great number of the things done that we want to get done.”

White House press secretary Karine Jean-Pierre: “We understand that her decision to register as an independent in Arizona does not change the new Democratic majority control of the Senate, and we have every reason to expect that we will continue to work successfully with her.” More from The Hill’s Brett Samuels.

About that media blitz: Sinema penned an op-ed, filmed a video and did two interviews to announce her decision. They all dropped this morning. Get caught up here:

Happy Friday! I’m Mychael Schnell, filling in for Cate today with a quick recap of the morning and what’s coming up. Did someone forward this newsletter to you? Sign up here.

The WNBA star landed in San Antonio this morning, touching down in the U.S. one day after a prisoner swap between the U.S. and Russia ended her nearly 10-month detention in the foreign country.

Griner walked off a plane at Kelly Field just after 5:30 a.m. eastern time. Video of that moment, via MSNBC’s Morning Joe.

The NBA star flew in from the United Arab Emirates, which was where the prisoner swap took place. She was released in exchange for the notorious Russian arms dealer Viktor Bout, who was serving a 25-year prison sentence in the U.S. Nicknamed the “Merchant of Death,” Bout was convicted of conspiring to kill Americans, among other charges.

Griner’s next stop? The Brooke Army Medical Center in San Antonio, according to The New York Times. National Security Council spokesperson John Kirby told CNN on Thursday that one of Griner’s first stops in the U.S. would be “a treatment facility where she can get the medical care that she might need after 10 months in detention.”

“So happy to have Brittney back on U.S. soil. Welcome home BG!” Special Presidential Envoy for Hostage Affairs Roger Carstens wrote on Twitter this morning.

Vince Kozar, the president of the Phoenix Mercury — Griner’s team — told CNN on Friday morning in an interview “it’s a bittersweet day.”

“It’s a reminder of how many folks haven’t been able to come home, and it’s a reminder of just how much time she was away. But we’re incredibly gratified and thankful she’s back,” he added.

The Dec. 16 deadline for Congress to pass funding or face a government shutdown is creeping closer and closer, but any semblance of a deal remains out of sight.

“I think there’s gonna be more of a sense of urgency as the clock ticks,” Sen. Richard Shelby (R-Ala.), vice-chair of the Senate Appropriations Committee, told reporters on Thursday.

Lead negotiators say they’ve been exchanging topline numbers for a potential omnibus funding bill and remain optimistic they could pass a measure this month, but those talks have not led to any breakthroughs.

With the clock ticking, negotiators have speculated that congressional leaders will try to take up a continuing resolution to extend the current fiscal year’s funding until Dec. 23, kicking the deadline for a deal or shutdown.

Some Republicans, however, have a different idea in mind: pass a continuing resolution that would last until the new year that way the Republican House majority can play a role in negotiating funding.

The Hill’s Aris Folley has the latest on the current end-of-the-year spending tug-of-war.

SBF to make an appearance on Capitol Hill:

Sam Bankman-Fried, the founder and former CEO of bankrupt cryptocurrency platform FTX, has officially agreed to appear at a House hearing next week on the collapse of his company, which filed for bankruptcy less than a month ago.

“I still do not have access to much of my data — professional or personal.  So there is a limit to what I will be able to say, and I won’t be as helpful as I’d like. But as the committee still thinks it would be useful, I am willing to testify on the 13th,” Bankman-Fried wrote on Twitter Friday morning.

The former CEO’s agreement to testify before the House Financial Services Committee comes after he showed an initial reluctance. Last week, he said he would appear before the panel when he finished “learning and reviewing” what happened at FTX.

But as The Hill’s Sylvan Lane reports, that answer did not fly with House Financial Services Committee Chair Maxine Waters (D-Calif.).

“Based on your role as CEO and your media interviews over the past few weeks, it’s clear to us that the information you have thus far is sufficient for testimony,” Waters said in a Monday tweet thread addressed to Bankman-Fried.

“The collapse of FTX has harmed over one million people. Your testimony would not only be meaningful to Members of Congress, but is also critical to the American people,” she added.

Wow, what a cool photo:

@AJamesMcCarthy tweeted, “This is the moment Mars peeked out from behind our moon after being hidden for an hour. This shot was captured using my largest telescope and a special high-speed camera. Seeing another planet rising on the horizon of our moon was such a surreal experience.” Photo

Tidbit — this is your Georgia Senate delegation:

The House and Senate are out. President Biden and Vice President Harris are both in Washington, D.C.

First, get up to speed with what types of pastries are out there with this explainer from Slurrp.

Then, join the celebration. I’ll be on the hunt for a flaky pastry later to mark the day properly.

And to leave you on a happy note before the weekend, here’s an efficient, organic, natural alarm clock.

How to fix a howitzer: US offers help line to Ukraine troops – Times of India