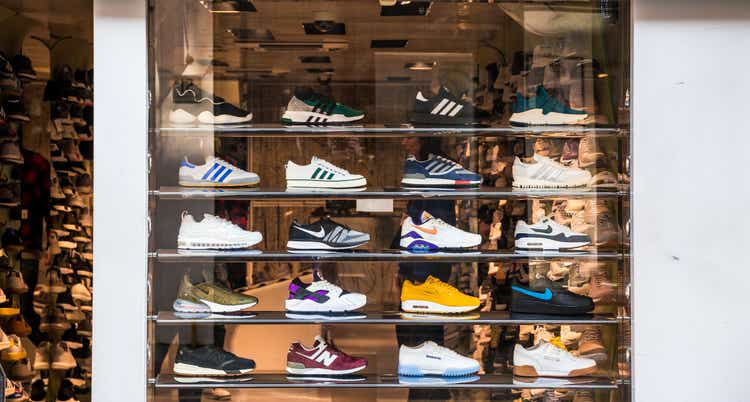 While national soccer teams compete on the field for the ultimate prize – the World Cup — Adidas (OTCQX:ADDYY, OTCQX:ADDDF) and Nike (NKE) are doing battle in retail stores with tournament merchandise. The Adidas logo appears on the game balls and much of the equipment used in the competition. Such global exposure looks like it is benefiting Adidas, since earnings are expected to see a 61.4% jump this quarter. Adidas is the main sponsor of the championship, but Nike is also dominating the soccer play field … so who will have the highest score?

Who dominates in the U.S.?

Although this is a worldwide event, here’s a snapshot of the brands’ sales performance in the United States regarding World Cup merchandise:

Nike has had a much higher sell-out rate than Adidas since the start of the World Cup. Nike sold out of 23% of their World Cup merchandise within two weeks vs. 11% at Adidas. Merchandise featuring these teams are selling out: Netherlands, France, Portugal and England. Refinitiv discovered this in a collaboration with StyleSage Co., which analyzes retailers, brands and products across the globe.

As expected, not much of the World Cup merchandise is discounted. Nike has a higher average price point than Adidas for its shirts and jerseys – which are the primary product category for the games: $71 vs. $46. Adidas has 27% of items in the FIFA assortment marked down with an average discount of 9%. Amongst items from teams who have been eliminated, the average percentage discount is higher at 35%. Meanwhile, Nike has none of the national team apparel on sale right now.

Neither company discounts much of its World Cup merchandise, because the tournament’s popularity means they don’t have to. Yet Adidas has been offering a bigger average discount of 9% in order to avoid inventory obsolescence. Despite this, its average inventory days metric is on track to rise for five straight quarters. Still, the current quarter is on track to post the smallest average inventory days increase (from 164.6 to 165 days) – a positive sign that perhaps the World Cup is helping to move inventory (Exhibit 2).

Meanwhile, Nike’s average inventory days is lower than Adidas’ and is on track to slightly decrease from the previous quarter (Exhibit 3). Nike also has healthy operating profit margins, in line with the industry standard. Our research shows that companies with high returns tend to have a higher probability of sustaining earnings in the future.

As an equity investment, Adidas’ stock price looks a little expensive. After adjusting long term growth (LTG) estimates for optimism bias, the StarMine Intrinsic Value (IV) model places fair value at $77.38 per share. In contrast, the market price is $121.72 per share. Additionally, plugging in today’s price and solving for growth further suggests that investors are not too optimistic. Adidas market expectations are low with an implied 5-yr compound annual growth rate (CAGR) of 1.0%, considerably below the 10.2% industry average.

Research has shown that sell-side analyst estimates include significant systematic errors and biases. Our StarMine Intrinsic Valuation (IV) model has identified and systematically removed three forms of analyst error and bias to improve the accuracy of longer-term estimates and enhance their ranking and sorting abilities.

Similarly, for Adidas, after adjusting Nike’s LTG estimates for optimism bias, the StarMine IV model places fair value at $61.29 per share. In contrast, the market price is $107.93 per share. Nike market expectations are also high with an implied 5-yr CAGR of 13.8%, higher than the industry average.

According to the StarMine Earnings Quality (EQ) Model, Nike scores a 72 out of a possible 100. Its high scores suggest that earnings are derived from sustainable sources. The company’s operating efficiency component suggests that Nike is performing healthily in this area. What’s more, Nike is sitting on a lot of cash, as indicated by the strong cash flow component score (Exhibit 5). On the flip side, Adidas could use help in this EQ model, as it scores a 42 out of a possible 100.

Adidas is also a bottom performer when it comes to the StarMine Combined Credit Risk (CCR) model scores, the most comprehensive StarMine credit model (Exhibit 6). Its score corresponds to implied credit ratings of BB, – below investment grade. On the other hand, Nike has a higher score suggesting it is financially stable and the probability of default is significantly small (<= 0.08%).

The market doesn’t seem to like Adidas’ prospects. The stock began a decline on August 15 and has underperformed its benchmark over the past two months (Exhibit 7).

Nike’s stock also started to decline in August. Since then, it has recuperated in mid-November as the retailer’s sales are getting a boost from the World Cup sales. The stock has been trending up for the past two weeks.

The World Cup championship is definitely boosting Adidas’ and Nike’s sales and clearing their inventory. Both stocks are richly valued, yet Nike has the better credit picture and earnings are coming from sustainable sources. Moreover, Nike is selling out of World Cup merchandise faster and at a higher price point in the U.S. than Adidas. Nike’s stock has also performed better and it’s in favor, suggesting that perhaps it is going to score the winning retail goal.