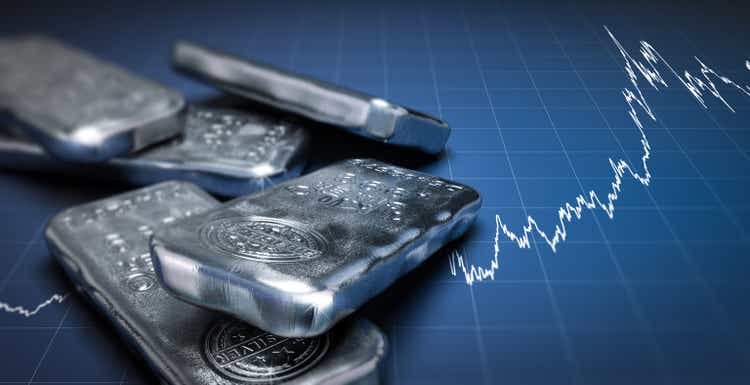 
Favorable Conditions for Investing in Silver and US-listed Silver Miners

Gold is great as a safe haven in times of high uncertainty, but silver plays a role in this regard too. The factors driving gold as a hedge against runaway inflation and the risk of economic recession due to tighter monetary policy should also prompt investors to invest in silver or US-listed stocks that track poor man’s gold’s performance in the commodity market.

Demand for silver for investment and hedging purposes will account for about 27.6% of total demand expected for 2022 and should grow more than 18% year-on-year.

The market valuation of silver-backed securities such as US-listed silver mining stocks is likely to rise in the coming period.

Investors should be bullish on Aya Gold & Silver Inc. (OTCQX:AYASF) shares as this silver mining company has significant upside potential in terms of stock price appreciation.

Aya Gold & Silver Inc. shares are positively correlated with precious metals price changes and the relationship should be quite strong according to the chart above.

Thanks to strong silver operations, this stock is well-positioned to benefit from the expected rise in precious metals prices.

Headquartered in Montreal, [Canada], Aya Gold & Silver Inc is a researcher and appraiser of silver properties, a developer of silver deposits, and a producer of silver.

The company’s flagship project is called Zgounder and is located approximately 265km east of Agadir, which lies within the Proterozoic Siroua Massif of the Anti-Atlas Mountains in Morocco.

Based on the annual production that the company plans to ship to the world market this year, Zgounder can certainly mine silver for several decades ahead.

Not to mention the possibility of increasing reserves from a basin containing almost 57 million ounces of silver in indicated resources by the end of 2021.

The longer-term target holds impressive growth potential as early as next year, and if backed by analyst expectations for silver prices, the result could have a memorable impact on Aya Gold & Silver Inc. shares.

The company plans to support growth through mine expansion by supporting the development of existing underground mining infrastructure.

The mining system will allow mineral activities to be carried out both horizontally and vertically in the mine. The company is on track to complete the infrastructure in 2023, thanks in part to the contribution of a respected Canadian operator specialized in underground mining activities.

But there’s more. The company is constructing a new processing plant to receive a significant stockpile of material in 2024 resulting from the expected higher underground production in 2023. While the implementation of a water conservation policy is making production activities resilient to dry weather conditions, which are not uncommon in the region.

The company is currently experiencing lower metal grades in the mineral delivered to the mill, but this issue is being fully offset by higher ore throughput and recovery at the mill. In addition, the miner wants to gain better control over mining operations and reduce short-term fluctuations in ore grades in hopes of further improving production rates. To this end, Aya Gold & Silver Inc. will conduct specific drilling, upgrade equipment and hire more workers.

In terms of future silver prices, the ounce, which is trading at $23.27 as of this writing, is expected to rise 9% to $25.37 and the target is achievable over the next 12 months, according to economists.

Silver prices are likely to rise as analysts are predicting as the metal will be in high demand for investment and hedging purposes due to the following factors.

The easing of the aggressive monetary policy that the US Federal Reserve [FED] has taken so far to combat the sharp rise in the price of goods and services. After 4 consecutive rate hikes of a whopping 75 basis points each, the Fed should now be less hawkish as the committee’s decision in mid-December is likely to be a 50-basis point rate hike. As a result, bonds and the broader category of fixed-income securities, which typically thrive in rapidly rising interest rates, imply a greater opportunity cost of not owning the precious metal. So silver will regain its appeal versus fixed income.

Fears that there could be very serious contraindications to the future economy due to the shock of the sharp increase in interest rates after the long period of accommodative Fed policy. To dampen record inflation [annual growth was 7.7% in October] and weaken consumption, which is resilient as the workforce headcount remains strong to avoid COVID-19 crisis-like labor deficits, the Federal Reserve is raising rates sharply, as has rarely been the case before. It will take time as the spillover effects on the economy are not immediate, but they could be dramatic for companies’ sales and profits, employment, and for household finances. Investors will flock to silver as they see the precious metal as a solution to mitigate the effects of a slowing economy.

Aya Gold & Silver shares have been in recovery mode since the end of September but are still low relative to some technical ratios and also cheap given the growth potential.

Not being bullish on this silver producer means not believing that silver will grow or that the company will meet its stated growth goals.

From today’s perspective, the risk of missing these targets is lower than the probability that they will be achieved.

Aya Gold & Silver, whose shares appear to be more volatile than the precious metal, has strong upside potential given the relevant catalyst of likely higher silver prices and stunning output growth targets.

Macroeconomic conditions will attract investors to silver as an investment vehicle and for hedging purposes.

If the company can meet its production growth targets as early as 2023 (the operation appears to be on track in that regard), the strategy has succeeded and, combined with a more favorable silver price environment, should have a positive fallout for the stock price.