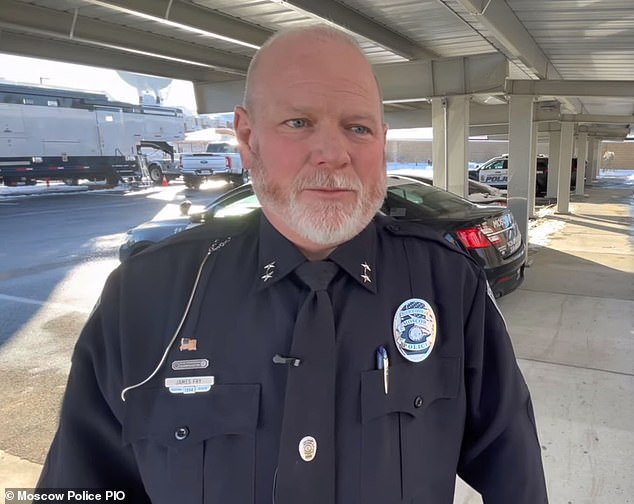 The Moscow Police Department, who have yet to make much headway investigating the murder of four University of Idaho students, have said they will now crack down on internet sleuths.

As last month’s brutal stabbings captured the nation’s attention, sleuths on the internet began posting popular theories about the murders to fill the void from the Idaho police, who have been criticized for sharing little and repeatedly contradicting themselves.

Speaking on Friday, Moscow Police Chief James Fry condemned the high volume of speculations and rumors surrounding the case, saying police have the sole authority to discuss the facts of the case.

‘We want people to pay attention to what we’re putting out there because that is accurate information, and anything that comes from other sources is either rumor or speculation,’ Fry said.

Following his statement, the police department said: ‘Anyone engaging in threats or harassment whether in person, online or otherwise needs to understand that they could be subjecting themselves to criminal charges.

‘Moscow Police Department cautions the public not to rely on rumors and remains committed to keeping the public informed. We urge reliance on official channels for accurate information.’

Moscow Police Chief James Fry (above) condemned the high volume of speculations and rumors surrounding the murder of four University of Idaho students. The police have threatened criminal charges against those who harass others  due to the spread of misinformation

Few details and contradictions from police has led to widespread theories spreading across the internet over the murders . Those killed in the November slayings were (left to right) Kaylee Goncalves, Madison Mogen (on Kaylee’s shoulders), Ethan Chapin, and Xana Kernodle

Ethan Chapin, 20, Madison Mogen, 21, Xana Kernodle, 20, and Kaylee Goncalves, 21, were all students at the University of Idaho. They were brutally attacked between 3am and 4am — and four weeks on, the killer has yet to be caught.

The fact that little remains to be known about the case has led to a flurry of theories surrounding the case, with Facebook and Reddit groups spearheading now-debunked and plausible ideas about the case.

While rumors spread, frustrations grew over the police department, which scarcely provided new information that could help crush the theories and misinformation.

Early on in the investigation, both Moscow Police Chief Fry and Latah County prosecutor Bill Thompson assured the public that the victims were targeted by the killer.

But then the police recanted their statements, saying they were not sure if the slain University of Idaho students were actually targeted.

A source close to the investigation also told OK! magazine that cops likely destroyed evidence due their negligence, or allowed it to be compromised with their sluggish response.

One of the key pieces of evidence early on in the investigation were a set of tire tracks located near the crime scene, where police waited six days before measuring.

‘The reality is this evidence was likely obliterated and if the cops had done things correct,’ the source said. ‘Those tire marks would have been photographed, measured, and preserved, on the day when the victims were found.’

‘The time that elapsed between when the bodies were found and forensics team returned to the crime scene allowed crucial evidence to be corrupted, by weather or other activity.’

‘With no suspect, no murder weapon and little to no leads, you have to ask the question: did police botch the investigation from the get-go?’ the source added.

Before Steve Goncalves said Wednesday that his daughter Kaylee died in the same bed as Maddie, this is where it was believed the college students had died

Kaylee and Madison were found on the top floor of the Moscow, Idaho home. College lovers Ethan Chapin and Xana Kernodle were found in a second-floor bedroom while survivors Dylan Mortensen and Bethany Funke were sleeping on the first floor

Moscow Police recently said they’ve received such an influx of tips related to their search of a white sedan spotted near the crime scene that they’ve enlisted the help of an FBI call center.

It comes just days after the Moscow Police Department scaled back their probe and removed a quarter of the officers assigned to the case, while insisting it was still the lead agency.

Due to the amount of tips coming in, calls are now being directed to the FBI center to help process the information, according to the latest police update.

They are being backed by 48 FBI agents and at least 30 Idaho State Police officers plus a separate forensics unit.

But the department insists it is still the lead agency after it received $1million from the state to expand the manhunt — which now enters its fourth consecutive week without any suspects.

The latest tips flooded in after Police said a 2011-2013 Hyundai Elantra was spotted ‘in the immediate area’ of the off-campus house where the students were stabbed to death in the early hours of November 13.

Kaylee’s family (above) previously said they learned that her injuries were worse than the other victims’. The family say they are tired of waiting for answers from the cops in Moscow

Speaking to DailyMail.com on Thursday at the city’s Christmas parade, Fry  appeared unaware of the latest report that the front door of the house was allegedly wide open hours after the killings.

Fry could neither confirm nor deny whether the door was, in fact, left open. It was previously stated the house had no visible signs of any break-in.

‘I’m not even sure where that came from, to be quite honest,’ Fry said.

Meanwhile, tensions grew further between investigators and the families of the victims, who have spoken out in frustration about the failure to identify a suspect.

Kaylee’s father Steven previously told NewsNation’s Brian Entin that police had told him her injuries were worse than the other victims’, but he didn’t go into detail.

Moscow Police contradicted that remark in their new statement, saying: ‘With the active criminal investigation, law enforcement has not released additional facts to the family or the public.’

‘There have been statements and speculation about this case, victim injuries, cause of death, evidence collection and processing, and investigative techniques,’ the statement added.

‘However, we firmly believe speculation and unvetted information is a disservice to the victims, their families, and our community,’ it continued, echoing a refrain from prior statements as the small-town department leading the investigation has come under increasing criticism.

‘The Moscow Police Department is committed to providing information whenever possible but not at the expense of compromising the investigation and prosecution,’ the department said.

The victims were bound and gagged: FALSE

Moscow police have denied reports that the victims were bound and gagged when they were stabbed to death on November 13. An autopsy found no such signs of bondage.

Bethany Funke and Dylan Mortensen lived in the house with the three female victims but miraculously survived the attack, only to find their friends dead the next morning.

Both girls had been out of town separately on Saturday night and returned home by around 1am – before the other four victims came home from a night out.

It took nine hours to call 911 about their deaths: TRUE

Police received a call at noon on November 13, and concluded that the four had been stabbed to death up to nine hours before, with the killing occurring between 3am to 4am that morning and there were no signs of forced entry.

Veteran Moscow police have described the scene as among the most gruesome and harrowing they have ever seen, with the victims left to bleed to death inside the house.

Officials arrived and discovered the additional victims and confirmed that anyone in the house when the 911 call was placed was not involved with the crime.

The incident is related to recent animal deaths in the area: FALSE

Moscow police say there is no reason to believe the deaths of the four college students is related to recent animal deaths in the area or to a dog found skinned from head to tail on October 21.

The incident is related to similar unsolved stabbings nearby: FALSE

Investigators have ruled that the quadruple murder is not tied to other knife stabbings in Idaho, Washington and Oregon — despite announcing last week that they were probing a possible link between the students’ deaths and a similar case in Oregon, where a husband and wife were stabbed in their beds by a crazed lunatic last year.

‘We don’t believe at this time … these murders are actually linked to two other knife murders that have occurred both in Pullman, [Washington] as well as Oregon,’ Idaho Police communication director Aaron Snell said, noting that police are ‘aware of these various reports’ and ‘looked into them.’

Moscow Police have ruled out murder victim Kaylee Goncalves’ ex-boyfriend, Jack DeCoeur, 26, as a suspect in her murder and the deaths of Maddie Mogen, 21; Xana Kernodle, 20; and Ethan Chapin, 20.

Goncalves’ parents, Steve and Kristi, said they stood by Jack ‘100 percent’ after it was revealed that Kaylee and Mogen had called him at least seven times before their deaths

Kristi told Jones that she believes her daughter and Jack ‘would have eventually been married.’

‘They would have eventually had children,’ she said, explaining that the pair had dated for years and were on track to reconcile after spending some time apart.

‘We are supporting him, and we know in our hearts and our minds and our souls and the depths of our soul, Jack is hurting,’ she said.

Murder victim Kaylee Goncalves, 21, (right) and her ex-boyfriend Jack DuCoeur, 26, (left). Kaylee and her friend Maddie called Jack at least seven times in the hours before they were killed

The man seen talking to them at a food truck was a suspect: FALSE

Authorities have also ruled out a man who was seen speaking to Kaylee and Maddie at a food truck, which is where they were caught on surveillance footage for the last time alive.

Officials say there may be multiple perpetrators responsible for the crime.