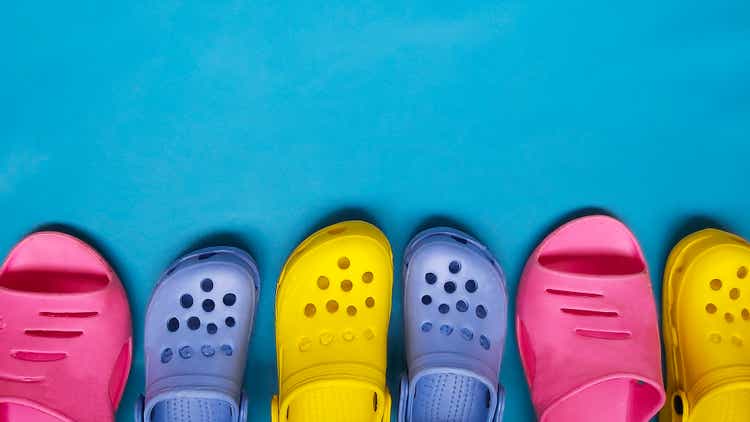 
The following segment was excerpted from this fund letter.

Crocs is a new long position. While the shoes are often perceived as a fad, it might surprise many of you that the Crocs brand has not only endured for 20 years but is still growing by >20% organically (on top of 73% revenue growth in Q3 last year) with mid-to-high 20% operating margins.

Aside from being a consumer discretionary company and perceived Covid lockdown beneficiary at peak earnings, why did the market offer up the opportunity recently to buy CROX at its lowest earnings multiple ever?

The company levered up to buy a relatively unknown shoe brand HEYDUDE for $2.5 billion in an auction process that was at first looked at with great skepticism. With the passage of time (and initial results), we think the market is coming around to the idea that the acquisition was a good one as the shoes will grow to become even more wildly popular. Academy Sports (ASO) recently called them out on their September 7th earnings call, saying, “We’re also excited to launch HEYDUDE in all stores in July just in time for back-to-school. We’re seeing strong early results and expect HEYDUDE to be a sales driver versus the remainder of the year.”

HEYDUDE has already greatly surpassed CROX management team’s initial growth expectations, to such a degree that it turns out they only paid an estimated ~9.5x NTM EBIT (a sizeable discount to CROX’s historical median ratio of 12.0x), for a high margin, rapidly growing brand.

As a relatively unknown and underpenetrated shoe brand, we gained conviction that the company can follow its Crocs growth playbook and systematically increase HEYDUDE’s distribution both domestically and internationally to drive a 20% revenue CAGR over the next few years. Since 2014, the CEO has had an impeccable track record of delivering on targets laid out and we think the company can continue this trend of excellent execution with HEYDUDE.