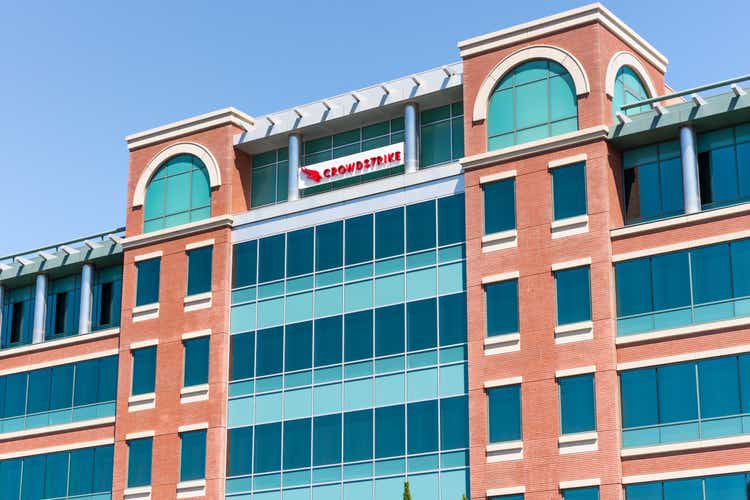 CrowdStrike (NASDAQ:CRWD) had a great quarter in terms of strong top-line and this was driven by strong customers addition and increasing module adoption. Although the management’s attributing the growth decline to tough macro, this was still a pretty good quarter in my view. However, a more pressing issue is its continuous high SBC expense. This is diluting shareholders and negatively impacting its EPS and FCF per share, signifying that they are not creating shareholder value.

CrowdStrike had another great quarter as its ARR grew 54% to $2.3 billion in 3Q23. This is a new net revenue of $198 million. This is still impressive given the longer-than-expected sales cycle amidst the macro, leading to the decline of net new revenue and expected growth decline in 4Q23, although, they had a record pipeline in 4Q23:

“As Q3 progressed and fears of a recession grew, this dynamic became more pronounced. In our smaller, more transactional non-enterprise accounts, we saw customers increasingly delay purchasing decisions…net new ARR contribution decreasing…This also impacted our net new logo additions…vast majority of these deals are not lost, just delayed…We expect these macro headwinds to persist through Q4…leading us to adjust our Q4 net new ARR expectations…entered Q4 with a record pipeline.”

This strong growth was driven by new customer addition as well as module adoption as shown above. I think this really goes to show how efficient the company has been in landing customers with multiple modules and executing its land-and-expand strategy by increasing the number of modules existing customers are adopting. During good or bad times, I do think cybersecurity continues to be top-of-mind, and is unlikely to stop spending.

Concern Over Its High SBC Expenses

As pointed out in my previous article, its high SBC expenses continue to be a pressing concern, primarily because (1) it dilutes shareholders, (2) reduces earnings and FCF, and (3) the way SBC expense is treated by accountants and companies as a non-cash expense (i.e. by excluding it from the computation of FCF and earnings using terms like adjusted EBITDA or non-GAAP operating profit).

Given that CrowdStrike is well-positioned to grab market share, management continues to reinvest in the business, and hence, incur huge SBC expenses. So it is not surprising to see that its operating losses are increasing on an annual basis. Rather than using non-GAAP operating profit, as companies generally exclude SBC, I’d prefer to use operating profit.

The increasing operating losses and high SBC expense are evident in its negative EPS. Its EPS continues to worsen as it increased by 9% Y/Y. This means that on a per-share basis, shareholders are suffering as there isn’t any value being created.

Recall that in my last article, I laid out my initial thesis by stating that so long as its FCF per share is still growing and growing faster than its shares dilution, its SBC expense is not a concern. While that is true, I failed to account for SBC expense in the computation of FCF. Here, you can look at how SBC expense is added back into its cash flow operation as it is treated as a non-cash expense in accounting terms.

After adding back the SBC expense into the FCF, this gives me the actual FCF margin of the company. As of 3Q23, its FCF margin is 6%, which is a decline from a year ago. And on a per-share basis, FCF per share has also been deteriorating.

While investors may attribute the after-earnings stock price decline to declining growth rates, a more concerning issue is the high SBC expense that the company is incurring which is destroying shareholder value on a per-share basis. While I do not deny that this is a phenomenal company executing at a high level, it, unfortunately, does not make a great stock.

What are your thoughts on the quarter? Let me know in the comment section below!