Editorial: We heard from the nation’s top doctor on loneliness, isolation and what to do if you catch COVID 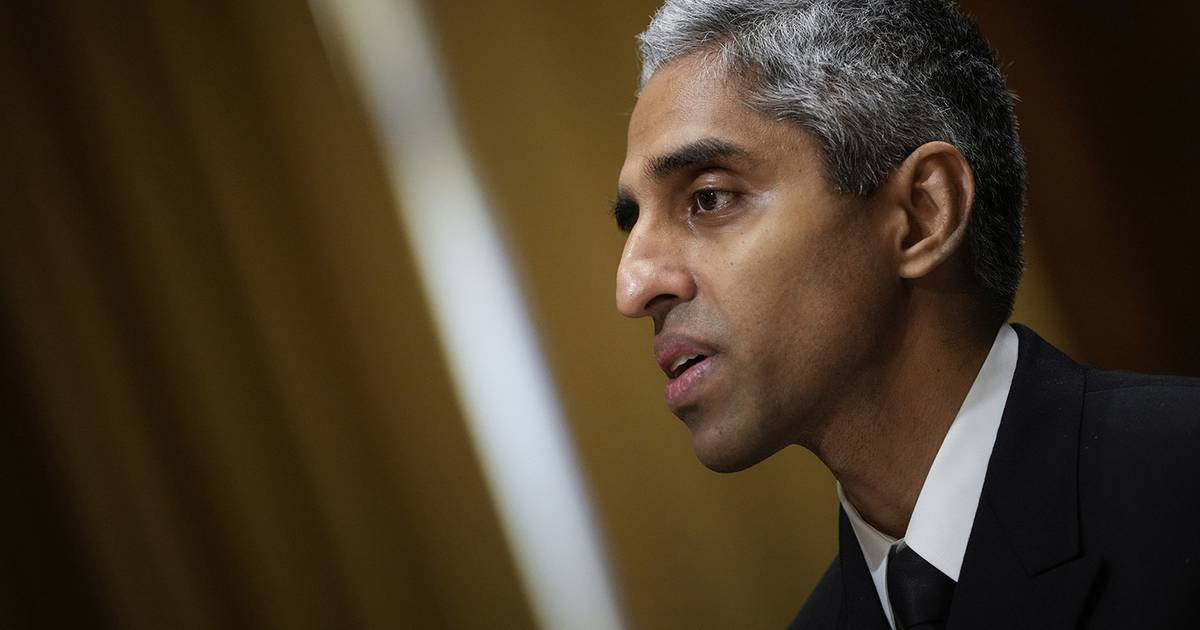 What do young people most often say to the U.S. surgeon general when he asks them about their health?

They say that they are anxious and lonely, Vice Adm. Vivek Murthy told us during a Thursday visit to the Tribune’s Editorial Board.

He noted the irony of how those feelings of isolation are never more evident than when young Americans are using social media. It’s a relatively recent phenomenon, said the nation’s top doctor, that has an impact precisely the opposite of what previously was understood by the word “social.”

According to Murthy, a smart, warm and highly articulate person who struck us as a viable candidate for further public office in the future, young people tell him they feel bad about themselves because they feel compelled to retreat into their phones, and begin comparing themselves with others with greater achievements, or who appear to doing cooler things.

While jumping off the platform may sound like the obvious solution, and the one most frequently advocated by their parents, they say that only makes things worse because the departure then makes them even more anxious that they are missing out. In other words, it’s a Catch-22. Social media always wins.

“These sites were developed by some of the smartest engineers and technicians out there, and they were designed to maximize engagement time on the platforms,” he said. “How can we expect our young people to compete with them?”

How, indeed? Murthy argued that the government long has seen fit to ensure basic safety standards for the common items that are brought into our homes, such as refrigerators or stoves. But social media channels have been allowed to proliferate and consume so much of an American youth without any such oversight.

This situation, he said, is the cause of far more of our problems than we currently realize. And it needs fixing. We hope he prevails over the resistance that those sites are sure to mount.

It is axiomatic that America has a mental health crisis, and that this nation feels lonelier than ever. But it was striking that Murthy did not ascribe this situation entirely to the COVID-19 crisis, even if he allowed that it exacerbated the growing problem.

Rather, he cited multiple interconnected causes for the malaise, including the cruel judgments of social media, the chaotic pace of our lives, the ubiquity of ideological conflict and our increased ability to recognize mental health issues that long have been present, and discuss them with newly acquired language.

The other part of his message was that isolation is not, well, an isolated problem.

Take, for example, the matter of emergency preparedness, something all Americans should consider.

If you have a serious accident at home, for example, your ability to get the vital help you need fast likely will depend on how well you know your neighbors, Murthy said. If you’re well-connected, they could be your first responders. Much attention is paid to making sure ambulances show up in a timely fashion, far less to whether or not there is a neighbor for everyone to call when they are in trouble.

And, Murthy said, there now is compelling evidence that isolation and loneliness also means an increased risk of heart disease, dementia and other serious health problems.

And what of the state of COVID? “We’d all like to be able to turn the page on COVID,” Murthy said, dryly. “But it’s still there.”

Given the political nature of his position, it was not surprising when he noted that he’d only joined the administration of President Joe Biden after the realization had dawned that keeping schools closed was having a seriously detrimental impact on kids, something initially panicked state and local governments had been slow to see.

But he also noted that allowing the “political polarization” of the debate over all of the COVID-19 issues brought dire consequences.

We will go further than the surgeon general. The reckless politicization of the crisis will be seen by historians as one of America’s greatest public health mistakes.

The good news? If you are fully vaccinated and up to date on your booster shots, and you take the Pfizer medication Paxlovid within five days of catching the virus, Murthy said, then your chances of hospitalization or death are “shockingly low,” and this applies even if you are in a high-risk group.

He noted that there was more work to be done in educating physicians as to that equation. And, since there were several COVID survivors in our meeting, he argued that it was a mistake not to take the medication if your symptoms appeared, because the virus does not peak and ebb in traditional fashion, and interaction with other medications can almost always be managed. Not taking the medicine while it is within its effectiveness window might mean that you have one less weapon on your side if things worsen.

And, Murthy said, there is growing evidence that the severity of your bout with COVID has an impact on the likelihood of your developing so-called long COVID, a phenomenon, he said, about which there still is much to learn.

In the end, the advice was simple.

Put down the phone and computer and, just as crucially, force yourself not to think about what you might be missing (pro tip: nothing of lasting import). Cultivate friendships, suspend anxiety-causing judgments and reach out to those with different views. Get to know your neighbors and discuss what you might do for each other should the need arise. Walk the dog.

Ensure that you are up to date with boosters. And should COVID come knocking at your door, don’t panic but take your medicine in a timely fashion.