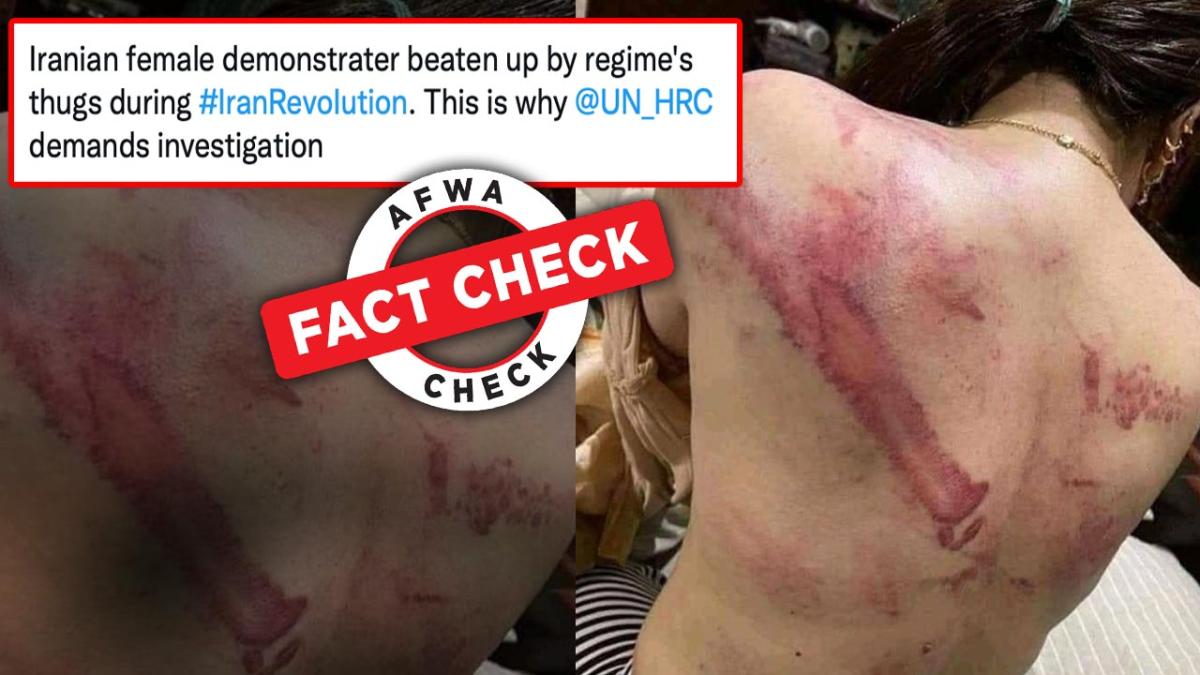 
A photo of a woman showing her badly-bruised back has gone viral on social media.

The claim is mostly false

By Jyoti Dwivedi: Iran reportedly hanged the anti-hijab protester Mohsen Shekari for “waging war against God” on December 8. This is the first known execution in relation to the anti-government protests, where thousands of Iranians have been demonstrating against mandatory hijab and other regressive laws in the theocratic nation.

Amid this, a photo of a woman showing her badly-bruised back has gone viral on social media. Those sharing the photo claimed the woman was a protester in Iran. One such tweet said, “Iranian female demonstrator beaten up by regime’s thugs during #IranRevoIution. This is why @UN_HRC demands investigation.” The archived version of this tweet can be seen here.

AFWA found that this photo is from 2021 when Wafa Khan, a dancer from Pakistan, was assaulted.

Reverse-searching the viral photo, we found it in a tweet from March 5, 2021, that said in Urdu, “This is a dancing girl named Wafa Khan. She was called by a miscreant named Mansoor Khan in the limits of Varsak Road Police Station Machni Gate. Then they tortured him there. The police are also not registering their report.”

The same account also shared other photos of the same woman where one could see the full extent of her injuries. Responding to this tweet, the Capital City Police in Peshawar, Pakistan, wrote in Urdu, “Immediate action was taken against the named accused in the incident of violence against dancer Wafa. Police force under the leadership of DSP Regi has detained 19 suspects from the house of a man named Mansoor.”

The Capital City Police of Peshawar have also posted photos of the arrested suspects. It stated that 19 suspects were arrested from the house of a man named Mansoor in the Mullazai village in Khyber Pakhtunkhwa, Pakistan. Upon searching, the police found arms, ammunition, liquor and other contraband in the house.

Many on social media had shared photos of the victim and the suspects following this. We could not find any credible news reports about the incident from Pakistani news outlets.

What is clear, however, is that an old photo from Pakistan is being falsely linked to the Iran protests.

A 4-day workweek might be coming to Maryland: ‘We could be on the verge of a win-win situation’